Can CBD help you chill? Here’s what we know so far.

The cannabis and hemp extract can be found in everything from lattes to kids’ vitamins. But doctors are still trying to learn if it’s healthy. 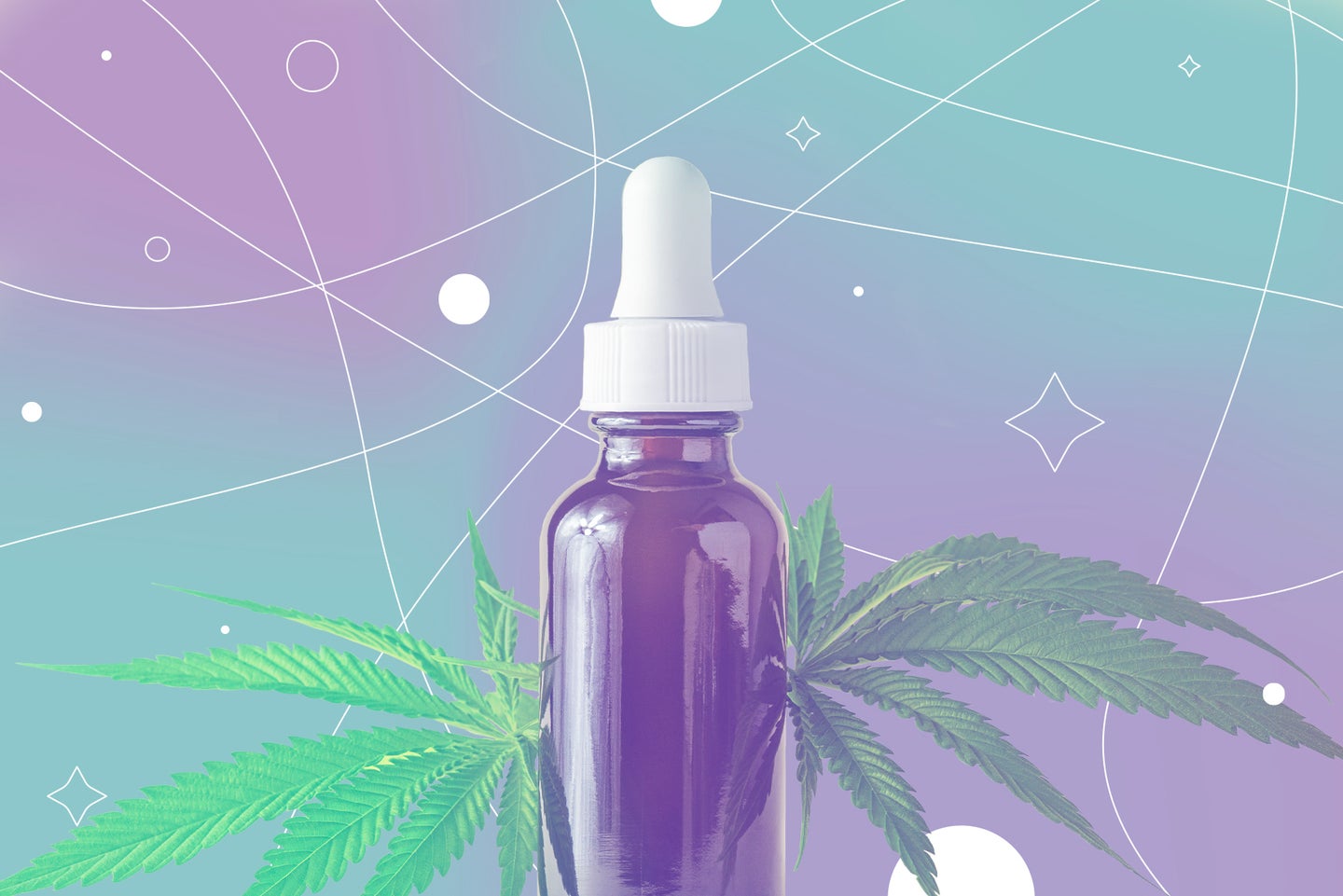 CBD comes from the same plants as the psychoactive chemical THC. So, what it makes it safer and legal for use?. Deposit Photos
SHARE

In 2013, Charlotte Figi made national news by becoming the youngest patient in Colorado to receive cannabidiol (CBD) therapy to soothe her seizures. The five-year-old had struggled with severe epilepsy since infancy, sometimes experiencing 50 or more episodes a day, with little relief from standard drugs and dietary tweaks. By the time her parents started consulting doctors about CBD extracts, she had difficulty walking, talking, and eating without help.

Figi’s neurologist put her on a low dose of a specially bred strain of medical cannabis, later dubbed “Charlotte’s Web.” The effects were almost immediate. The seizures slowed from daily to weekly events, and soon, the kid was living life almost normally. After close to two years of the oral treatment, the doctors decided to wean Figi off other epilectic medications.

Figi’s story represents one of the clearest, most well-documented cases of the healing potential of CBD. (The young pioneer died last year, due to complications of COVID-19.) Though people have used the plant-based chemical to treat migraines and other bodily aches for centuries, the science around its efficacy is still inconclusive because it’s tricky to study its direct effect on the nervous system. Regardless, the industry has boomed in the past decade. Today CBD can be found in a range of products—from lattes to bath bombs to dog treats—and is marketed as a cure-all for pain, anxiety, insomnia, and even AIDS.

So, what should a person who’s buying CBD expect? There’s plenty of information out there, but the bottom line is confusing. Here’s an overview of what medical experts say about the ingredient and whether it lives up to its hype.

CBD is essentially cannabis, minus the strong psychoactive bits. The carbon-oxygen-hydrogen compound can be found in high concentrations in Cannabis sativa and less-potent hemp plants. Sometimes manufacturers mix it with traces of tetrahydrocannabinol (THC), the cannabis-based chemical that gets people high, but it generally doesn’t carry the same dopamine-heightening and possibly addictive properties.

Like THC, though, CBD works its “magic” by cozying up to the nervous system. From what molecular scientists know so far, it somehow changes proteins found all over the body that are responsible for managing pain, inflammation, mood, appetite, and even memory. It’s still unknown how extensively it affects that internal chemistry, especially when combined with other ingredients, says Johns Hopkins University food scientist Kantha Shelke.

The Food and Drug Administration (FDA) recently updated its CBD regulations to state that it supports further research on benefits, safety, and use. For now, the extract is considered a controlled substance if it comes from cannabis plants. It’s less restricted when it’s harvested from hemp.

That seems relatively straightforward, but throw local laws into the mix and the standards become a lot more unwieldy. CBD is legal to sell and buy in one form or another around the US, though it’s harder to hawk across state lines because of the federal regulations. In places where it’s lawful, the ingredient can be added to any product as long as it contains less than 0.3 percent THC and is marketed as a cosmetic or supplement. If it’s labeled as a drug or dietary substance it has to undergo clinical tests and win FDA approval before the public can lay hands on it. The agency has only approved one CBD medication so far: Epidolex, which is used to treat the same genetic syndrome that Charlotte Figi had.

Overall, the FDA seems unconcerned with low doses of the extract in food and wellness items. It does, however, caution against giving CBD products to children, pregnant and lactating people, and pets.

What are the proven benefits?

Some of the best research on CBD’s therapeutic effects comes from treating childhood epilepsy (thanks to the Figi family), schizofrenia, sleep deprivation, and anxiety disorders. The chemical has shown strong results in relieving all four of these conditions, with “a clear calming effect,” according to one 2019 analysis. That said, most of the studies exploring this connection don’t include a control group, or a baseline for comparison.

When it comes to looking at CBD for pain relief, the research is even more flimsy. Tests have shown that it can be effective against arthritis in rats, and that it might work as well as opioids for multiple sclerosis and cancer patients. But many of these treatments also included some amount of THC, so it’s hard to say if CBD was the primary cause of relief.

There’s also the question of which forms of CBD are safe enough for consumers but strong enough to make a difference. For neurological conditions like anxiety or apnea, the chemical needs to be absorbed into the bloodstream to have maximum impact. That means it needs to be ingested, inhaled, or rubbed in at high concentrations. But as health reporter Sarah Jacoby wrote in Self while vetting her own CBD buys, many of the proteins that trigger pain and inflammation are located between the skin and veins. So, any cream or gel that wants to counter aching joints and tight muscles needs to be able to get through the dermis but not as deep as the blood vessels. That’s a tall order for any drugstore formula.

Overall, doctors are reluctant to call CBD a pain panacea. But companies keep putting it in gels, goos, tinctures, massage oils, and roll-on creams, and people continue to snap them up. (One market report put CBD sales at nearly $5 billion sales in 2020.) It’s clear that the ingredient is somewhat beneficial to human health—science just needs to understand how much.

Are there any bad effects?

Medical researchers haven’t pinpointed any deadly patterns with CBD use yet. A few case studies have mentioned respiratory failure, but in many of those instances, the patients also had THC in their system. People have complained about nausea and gastrointestinal issues after taking high concentrations of CBD. The Mayo Clinic also mentions fatigue, dizziness, and loss of appetite as possible complications.

There are concerns that CBD might interact negatively with other drugs, specifically blood thinners like wafarin. But there’s no specific guidance on which medications to avoid mixing with the extract.

How much should people take?

Unfortunately, there’s no CBD-specific version of the food pyramid. Dosing depends on body weight, desired effect, and the way a person is taking it. CBD products often come with serving suggestions—but those can be misleading, given that the FDA doesn’t test every supplement against its labels and claims. (The agency has issued warnings to dozens of companies who’ve listed incorrect information about CBD and THC levels in their products; see the full list here.)

“With CBD, dosage matters,” Shelke says, as over-indulgence has been associated with ill effects. But without a fundamental understanding of the chemistry of the ingredient, and how the cooking process changes it, it’s hard to come up with scientifically backed dosing recommendations. With the limited information available, Shelke advises to go the “less is better” route with any unregulated CBD products.

Why is CBD so hard to study?

Because CBD is one of hundreds of compounds in hemp and cannabis, it’s tricky to extract and standardize. If the chemical is tainted or alternated in any way during the process, it can have a different set of effects. The way it’s consumed also plays a big part in the reaction. As Figi’s neurologist wrote back in 2014, cooking or smoking CBD means adding heat, which could break down the chemical and make it less beneficial. Pills and edibles, on the other hand, need to be carefully engineered so that they don’t get neutralized by stomach acid.

All that variability, both in the plants and the products that are derived from them, makes CBD more challenging to test for medicinal purposes. It’s also often mixed with THC when treating chronic pain or life-threatening illnesses, so it take many extra layers of research to isolate the purely physical perks from the psychoactive ones.

Is it safe to cook with?

Plenty of companies, restaurants, and cookbook authors are now folding CBD into their recipes. But does the ingredient have the same therapeutic effect when it’s baked in a brownie pan at 360 degrees Fahrenheit or seared in a skillet with sea bass and lemon rinds?

“There are many unanswered questions about the science, safety, quality, and physiological effects of CBD that need to be addressed before one can identify the effects of various chemical reactions on its efficacy,” Shelke says. Part of the issue with cooking with the extract is that the purity and the concentration is often unknown. This makes it even harder to know how it will interact with other ingredients, and whether that combination will help or harm a person. Bottom line: It’s better to avoid highly processed products or prepared meals with CBD, especially if you’re new to the compound.

What’s the best way to see if CBD works for me?

If you’re looking for a supplement to help you go to sleep at night, relieve a light migraine, or unwind after a stressful event, try a low-stakes gummy or topical oil. Be sure to choose a well-reviewed and reputable product, Shelke says: Just because it says it contains CBD doesn’t mean it will live up to its promise.

To treat chronic pain, depressive disorders, or other serious illnesses, get your doctor’s recommendations first. They can take stock of the latest research specific to your needs and also track how CBD works with other prescriptions you’re taking.

As you head into the experience, manage your expectations. Like most wellness products that are backed by tepid evidence, the results can be hit or miss. Stay within the recommended doses on the products’ labels and report any unexpected side effects to your primary-care physician.

The future of CBD seems full of potential, but in present times, there are more questions than answers.

This post has been updated with new information from the Food and Drug Administration.