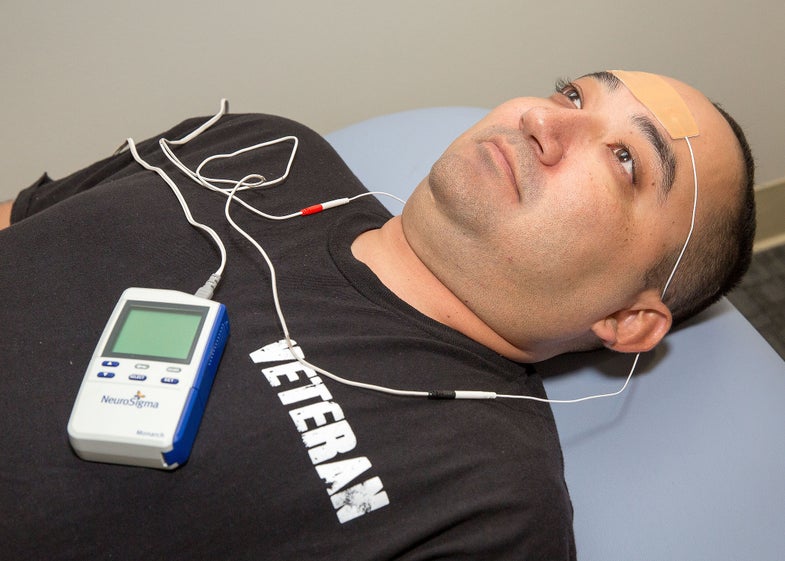 For some people who experience traumatic events like robberies, war, or abuse, the emotional effects continue for decades after the episode has ended. Sufferers of post-traumatic stress disorder (PTSD) are susceptible to anxiety, flashbacks, and nightmares, which isn’t always ameliorated by treatments like therapy and medication. Now researchers from the University of California Los Angeles have developed a non-invasive patch that stimulates the brain to treat symptoms of PTSD, according to a study published today in the journal Neuromodulation: Technology at the Neural Interface.

The patch uses a technique called trigeminal nerve stimulation (TNS). It’s hooked up to a 9-volt battery with which it generates small electrical currents that move through the forehead to parts of the trigeminal nerve, the largest nerve in the brain. The nerve is connected to many different parts of the brain, including the nucleus tractus solitarius, a structure found in the brainstem that is thought to integrate information from several disparate parts of the brain, including those in which patients with PTSD have abnormal activity. Targeting this nerve in particular makes TNS different from other neuromodulation techniques such as transcranial magnetic stimulation (TMS), used to stimulate neuron activity in the prefrontal cortex, and transcranial direct current stimulation(tDCS), which triggers brain cells to release painkilling compounds.

A proof-of-concept study published last year showed that TNS can help treat depression in patients who didn’t respond well to drugs. The researchers suspected that TNS might work well for patients with PTSD as well.

The researchers recruited 12 participants with PTSD who were already receiving therapy, medication, or both to treat the condition. The participants used the forehead patch while they slept for eight weeks. They completed written assessments of their symptoms both before and after the eight weeks of nightly TNS treatment.

The researchers found that the study participants saw an average of 30 percent reduction in the severity of their symptoms. They were able to function more easily in their daily lives, and a quarter of the subjects found their symptoms go away completely.

Without any control subjects, such a small sample size, and with a somewhat unreliable metric for the severity of patients’ symptoms, it’s difficult to assess just how well TNS would work for the majority of patients with PTSD.

But it’s a promising proof of concept. In the next phase of their research, the scientists plan to recruit military veterans, which have a much higher incidence of PTSD than members of the general population. They’ll also compare the efficacy of the TNS patch against various controls and placebos.