Of all the ideas for dealing with the Great Pacific Garbage Patch, this one may be closest to home —... 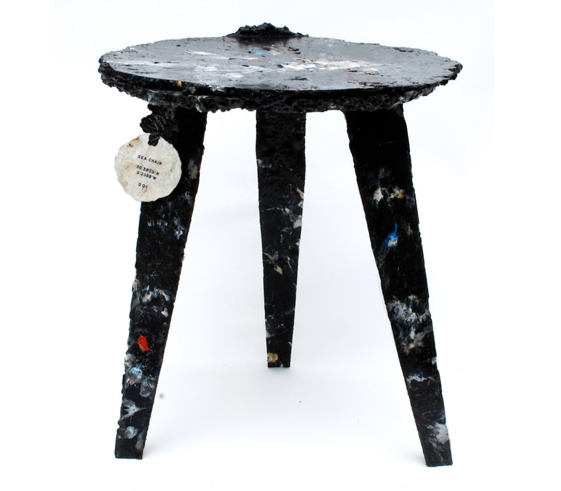 Of all the ideas for dealing with the Great Pacific Garbage Patch, this one may be closest to home — turn it into furniture. Until sea drones can be built to hoover it all up, this is as good a solution as any.

The U.K.-based artists at Studio Swine eventually want to capture bits of plastic where they float in the ocean, recycling them on-site into furniture or bringing them to shore for recycling and further use. Until then, they’ve come up with a system to use plastic that has washed up on shore.

The garbage in the ocean is not so much a patch, but a soup of tiny pieces floating in a collective. Studio Swine imagines collecting them and pressing them together like particle board and making new products. They built a sluice contraption to help sort these particles, much like miners would pan for gold.

The team tested it at a place called Porthtowan beach in southwest England, where they found many small plastic pellets known as “nurdles,” around 4 millimeters in diameter. Nurdles are pre-production pieces of plastic that wind up on beaches after spilling in ocean transit, or otherwise being lost or dropped. They have not been injection-molded yet, which would make them easy to work with.

The plastic-panning contraption is called the Nurdler, and it uses a hand-powered water pump to sort plastic bits by size. After sorting, the machine contains about one-fourth organic material, like seaweed and driftwood. This material can be compressed into small briquettes that can be burned to melt the plastic. The team used this system to build its first prototype item, the Sea Chair above, which was displayed at the Furniture Fair in Milan this year. The tag shows the geographical coordinates of the plastic, and a chair production number.

No word yet on whether more of these will start cropping up at furniture stores anytime soon — but here’s hoping so, for a pretty elegant new purpose for plastic garbage.