Ask Anything: Will We Ever Run Out Of Potable Water?

Short answer: Not if we get creative. 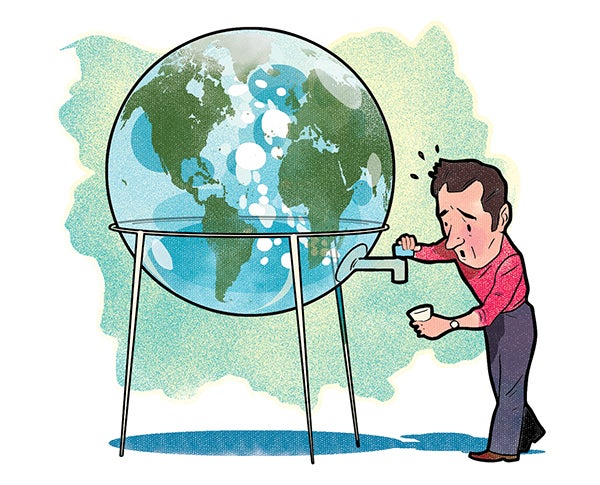 “There’s a lot of hype around this issue,” says Upmanu Lall, professor of earth and environmental engineering at Columbia University and director of its Water Center. But, he says, we’re in little danger of running out of water overall. One could conceive of a scenario in which we’ve used up all the freshwater locked in ice or aquifers. Indeed, the water table has already dropped at an alarming rate in specific regions. (We’re on pace to deplete the Ogallala Aquifer, which underlies much of the Great Plains, in the coming decades, for example.) But even if that happened, we’d still have access to other forms of water. “The most common resource is rainfall, and that’s renewable,” Lall explains. “It’s nature’s way of treating water through a distilling mechanism.”

‘The most common resource is rainfall, and that’s renewable.’

In places where water has grown scarce, farmers may be forced to change their approach to watering crops. Some may switch from using groundwater to collecting rain, or another more efficient option. In the Great Plains, exploitation of the Ogallala has made further pumping much more expensive than it was. It may soon make more sense to invest in better means of irrigation. Some are even talking about piping in water from the Great Lakes. With water, it’s easy to fret over a grim future. What’s harder is innovating our way toward a brighter one.