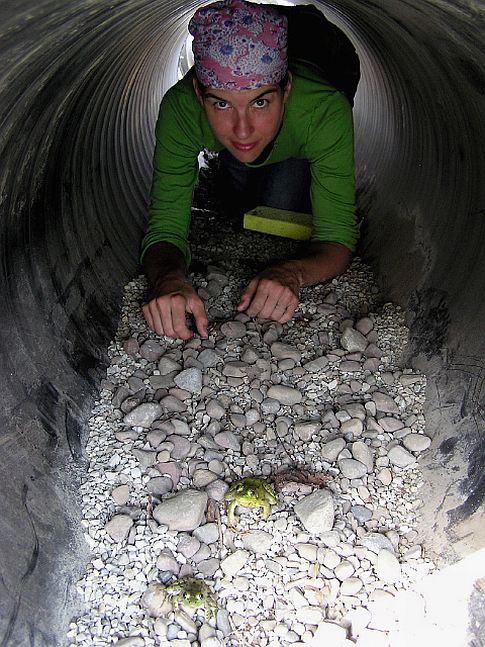 Hara Woltz’s clients don’t say much — mostly just ribbit. A landscape architect and biologist at Columbia University, Woltz has undertaken the daunting task of creating road-crossing tunnels for amphibians and reptiles, based on different animals’ preferences for different tunnel attributes. Building herpetological crosswalks might seem absurd, but the stakes are high: nearly one-third of the world’s amphibian species and many of its reptiles are spiraling toward extinction due to habitat loss and fragmentation from human development.

It’s one thing to build a tunnel under a road, but it’s another to build a tunnel that animals will actually use, according to Woltz. “We couldn’t obviously ask them questions,” she says, “but we could determine what they liked through behavioral studies.”

Woltz and a team of scientists from New York universities set up a series of PVC pipe tunnels of differing diameters and lengths, and lined with various materials such as soil, gravel, and cement. Every amphibian or reptile had fifteen minutes to negotiate each tunnel — if they stalled beyond that, the attempt was counted as a “balk.” The researchers used common species collected near the study site in Baldwinsville, New York — snapping turtles, painted turtles, green frogs, and leopard frogs.

Among the study’s pocket-sized participants, tunnels greater than 1.5 feet wide and lined with soil or gravel were the most popular substrate choices, because they held the moisture the animals needed to keep their skin from drying out. The researchers also found that short fences alongside the road worked well to funnel the small travelers toward the tunnels and keep them off the roads. The study was funded by the New York Department of Transportation.

“Almost everyone has had an experience with hitting an animal or seeing an animal dead on the road. It’s something that’s part of the public conscience,” says Woltz.

Volunteers of the New Jersey amphibian crossing survey have seen firsthand the toll that car traffic can have on local amphibian populations. The team hits the road the first warm, rainy nights of spring — when frogs and salamanders start moving toward breeding pools — to aid seasonal migrants across busy thoroughfares, and even, where possible, shutting down roads at migration hotspots.

As few as 26 cars per hour can cause 50 to 90 percent mortality at peak migration times, according to Mike Anderson, a coordinator of the survey and a member of the New Jersey Audubon Society. At one site in northern New Jersey, road traffic is believed to have wiped out a population of locally endangered blue-spotted salamanders. The volunteers were no match for the more than 200 cars an hour that passed through the site at rush hour. “In the end, we were only seeing a couple [salamanders] a year, so we finally just gave up,” says Anderson.

Amphibian and reptile crossing tunnels can be costly to build — the New York Department of Transportation estimates that retrofitting an existing culvert into a crossing tunnel with a guide fence on a two-lane road could cost 9,000 dollars. Woltz and the DOT want to make sure the tunnels will actually lead to lives saved. This involves building tunnels that amphibians and reptiles are not afraid to enter, as well as strategically placing those tunnels at migration hot-spots. Volunteer projects such as the New Jersey survey are crucial in identifying important sites where crossing structures could be implemented.

Wildlife tunnels have previously been implemented in Florida, Colorado, Arizona, Arkansas, and parts of Europe, with varying degrees of success. According to Woltz, those that were unsuccessful failed to take into account the unique behavioral and physiological traits of the species they were targeting. She says that understanding the needs of individual species is crucial to the success of tunnels as tools for conservation.