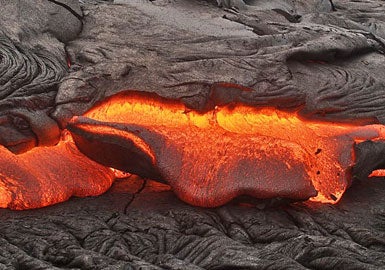 Lava breaks through the cooling crust to continue the formation of a new tributary. Most shield volcanoes, including Kilauea, erupt low-silicon basalt, which results in a more fluid lava.

We know this much: Earthquakes strike along faults–fractures in the planet’s crust where plates of rock are thrust into a sort of geological gridlock. The difference between a tremor and an earth-shattering 8.0-plus-magnitude quake depends on whether the plates slip when the tension between them is still relatively low or if they snap after enduring millennia of mounting strain.

Calculating exactly when this might happen, however, is no easy feat. “We’re not even getting close to predicting earthquakes,” says Thomas Heaton, a professor of geophysics and civil engineering at Caltech. Maybe scientists can’t tell us when a quake might strike, but they’re getting much better at pinpointing where the biggest ones will result in heavy casualties and financial loss. “The real culprits are cities with a lot of six- to 10-story buildings made of reinforced concrete,” Heaton says.

On his shortlist: Tehran, Iran, and Istanbul, Turkey–both cities have populations of more than 12 million and long, deep and very powerful seismic faults nearby. More vulnerable still is the enormous Himalayan thrust fault in Northern India. The three Indian states that border it have a combined population of more than 25 million people who mostly reside in brittle concrete or earthen structures.

Jean-Philippe Avouac, a professor of geol-ogy and director of the Caltech Tectonics Observatory, traveled to Nepal last year to study a section of the Himalayan fault. “A large portion of the [fault] between Katmandu and Dehradun, north of Delhi, hasn’t produced any known big quakes for at least two centuries,” he says. “Sooner or later this [fault] will break, and the death toll could be huge, given the density of population in Northern India, the soil condition–which is prone to liquefaction–and the type of construction.”

Heaton praises instruments such as InSAR and GPS, describing them as “stunning tools” that have “helped us recognize where strain is accumulating in the Earth.” More promising–though, sadly, not much help to Iran, Turkey or India–is EarthScope, a new partnership between the USGS and the National Science Foundation that involves embedding a “strike-slip” sensor 10,010 feet deep in the San Andreas Fault as well as implementing a nationwide system of hundreds of GPS sensors and strain meters along the edges of the Pacific and North American plates.

For now, however, the best technological hope for the world’s earthquake hot zones is the Global Seismic Network (GSN), which consists of 135 seismic monitors positioned worldwide that register quakes in real time and then beam the data to satellites or upload it to the Internet. GSN functions like a seismic watchdog, recording and cataloging quakes as they occur. Ultimately, GSN data will be assembled into a global database of seismic activity. Analyzing the data en masse, the thinking goes, might reveal trends and patterns that are precursors to a fault rupture.