At 20 feet below sea level, new orleans is a prime target. An ambitious new levee system would decrease the risk 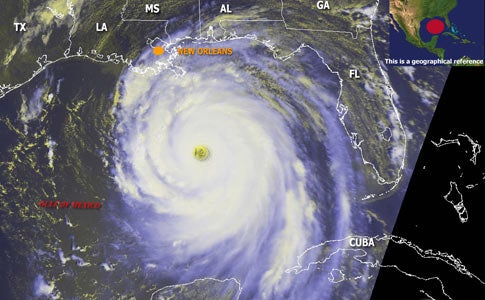 It takes Scott Kiser only a split second to name the one city in the U.S., and probably the world, that would sustain the most catastrophic damage from a category-5 hurricane. “New Orleans,” says Kiser, a tropical-cyclone program manager for the National Weather Service. “Because the city is below sea level-with the Mississippi River on one side and Lake Pontchartrain on the other-it is a hydrologic nightmare.” The worst problem, he explains, would be a storm surge, a phenomenon in which high winds stack up huge waves along a hurricane´s leading edge. In New Orleans, a big enough surge would quickly drown the entire city.

Long before settlers decided that the shores of the Mississippi would be a nice place to raise a family, the river regularly topped its banks, heaping silt and mud onto surrounding wetlands. After a particularly nasty flood in 1927 that killed 300 people and left 600,000 homeless along the length of the river, city leaders in New Orleans decided to construct levees-some up to 25 feet high-to contain the swelling river during heavy rains. Residents had also been battling yellow fever, a viral
disease spread by mosquitoes. From 1817 to 1905, the epidemic killed 40,000. “So people decided to drain the swamps,” says Al Naomi, senior project manager for the U.S. Army Corps of Engineers in New Orleans. With the levees in place and the swamps pumped dry, the city could now spread into areas that were once uninhabitable. “But when you take the water out of the swampy soils,” he continues, “they start sinking.”

Today, parts of New Orleans lie up to 20 feet below sea level, and the city is sinking at a rate of about nine millimeters a year. “This makes New Orleans the most vulnerable major city to hurricanes,” says John Hall of the Army Corps of Engineers. “That´s because the water has to go down, not up, to reach it.”

The Saffir-Simpson hurricane scale defines a category-5 storm as one with “winds greater than 155 miles per hour and storm surge generally greater than 18 feet.” Although hurricanes of this magnitude slamming directly into New Orleans are extremely rare-occurring perhaps every 500 to 1,000 years-should one come ashore, the resulting storm surge would swell Lake Pontchartrain (a brackish sea adjoining the Gulf of Mexico), overtop the
levees, and submerge the city under up to 40 feet of water. Once this happened, the levees would “serve as a bathtub,” explains Harley Winer, chief of coastal engineering for the Army Corps´s New Orleans District. The water would get trapped between the Mississippi
levees and the hurricane-protection levees. “This is a highly improbable event,” Winer points out, “but within the realm of possibility.”

New Orleans has nearly completed its
Hurricane Protection Project, a $740-million plan led by Naomi to ring the city with levees that could shield residents from up to
category-3 storm surges. Meanwhile, Winer and others at the Army Corps are considering a new levee system capable of holding back a surge from a category-5 hurricane like Ivan, which threatened the city last year.

To determine exactly where and how high to build these levees, the engineers have
enlisted the aid of a 3-D computer-simulation
program called ADCIRC (Advanced Circulation Model). ADCIRC incorporates dozens of data points-including seabed and coastal topography, wind speed, tidal variation, ocean depth and water temperature-and charts a precise map of where the storm surge would inundate New Orleans. The category-5 levee idea, though, is still in the early planning stages; it may be decades before the new
barriers are completed. Until then, locals had better keep praying to Helios.