The Snails of Old Ohio

A building contractor's fascination with ancient shells is unique and contagious. 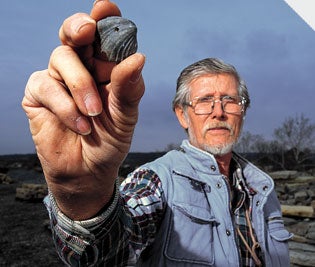 Growing up on the Maine coast, Stephen Felton remembers, “I spent practically every Sunday at a clambake. And I was always looking at echinoderms, gastropods, and clams.” He’d pick up the shells and wonder: How old were they? How did they get their food? Why did they die? He never lost his curiosity about these creatures, even when he moved to landlocked Cincinnati in 1955 to marry and become a building contractor. And soon, he found something better than seashells: “Fossils! Boy, there were fossils literally everywhere, from down by the Ohio River to the highest hills.”

Indeed, Cincinnati is one of the most fossil-rich areas of the U.S. About 450 million years ago, during the late Ordovician period, it was covered by shallow seas and had a Caribbean-like
climate rich in invertebrate marine life. Back around 1960, Felton often found himself doing brick and stone work on home construction sites. At lunchtime, he’d put down his trowel, grab the homemade chicken and iced tea his wife, Emma, had packed for him, and search the site for fossil starfish or echinoderms, some of which are now in the permanent collection at the University of Cincinnati. Then, in 1965, he came across a brachiopod fossil with a hole in it. He’d found his specialty.

“I thought, this is what the snails do on the coast of Maine when they pick up quahog clams: drill a hole in them and eat them,” he says. “So I picked up the snail fossils surrounding it, and searched other places, and found more of these holes, and decided I needed to know more.” He went to fossil shows and lectures, read like crazy, and continued searching for specimens. He concluded that the ancient snails probably secreted an acid on their prey, much as modern snails do, then used a tooth-like structure to bore a hole into the shell. Scholars doubted snails did so during the Ordovician period, but Felton persevered, found more samples with larger holes, and, finally, presented a paper. “Now more people believe this happened during the Ordovician time, rather than several hundred million years later.”

Such research is one reason why the Paleontology Society presented Felton, now 67, the 2001 Strimple Award for outstanding contributions to scientific knowledge by an amateur. David Meyer, a University of Cincinnati professor of geology, is effusive in his praise. Felton, he says, tears down the barriers between scientists and amateurs. “He willingly donates time, specimens, and information,” says Meyer. “He helps grad students and amateur clubs. He has written and presented papers. He is . . . just like a scientist.”

GIVE IT A TRY

Got a penchant for paleontology? Here are Stephen Felton’s tips on how to get started:

**Join a fossil club **
To find one in your area, see the Mid-America Paleontology Society Web site: midamericapaleo.tripod.com

The Fossil Book, by Pat Vickers Rich and Thomas Hewitt Rich; and Handbook of Paleontology for Beginners and Amateurs, Part I, by Winifred Goldring