Can We Stop Storms?

With brutal hurricanes on the rise, scientists turn to far-out technologies to fight them off 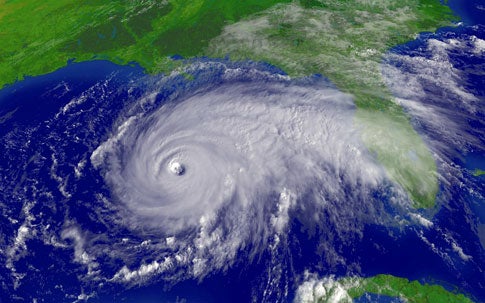 Peter Cordani plans to use 747 “super tankers” to airdrop water-absorbing powder onto hurricanes.

Back in the 1960s and ’70s, legions of scientists explored technologies to zap strength from hurricanes. Those efforts were scrapped both because experiments were inconclusive and because the cost of deploying a full-scale system to regularly battle the cyclones would have been staggering. In light of
Katrina and Rita’s $200-billion-plus swath of destruction-and a forecast of even more violent and catastrophic hurricanes to come-that steep price tag now seems like a bargain, and
scientists are once again entertaining schemes to mitigate monster storms.

One approach, according to veteran hurricane expert Hugh Willoughby, is to create an oily slick on the ocean in the path of an approaching hurricane. Willoughby is a professor at the International Hurricane Research Center in Miami and a former director of the National Oceanic and Atmospheric Administration’s Hurricane Research Division. The goal of the oil, he says, is to weaken a storm by preventing
seawater from evaporating, a process that fortifies the swirling rain bands that form a hurricane’s backbone.

Massachusetts Institute of Technology atmospheric scientist Kerry Emanuel conducted laboratory tests of the oil concept in 2002, but the slick quickly dissipated under conditions emulating rough seas. “When the winds blow at 100 knots, there really isn’t an ocean surface,” Willoughby explains. “It goes from water full of bubbles to air full of spray, with a smooth transition between the two.” He says the trick is to formulate a liquid-like substance that clings to the surface of the ocean even during violent winds. “It could be sprayed by a bunch of 100,000-ton tankers.”

Another concept involves a squadron of cargo planes airdropping thousands of tons of a water-absorbing powder onto a hurricane to extract moisture from rain clouds. Dyn-O-Mat in Jupiter, Florida, manufactures superabsorbent products, such as garage mats designed to soak up oil from leaky cars. The firm is developing a gel that has shown promise in early trials. In July 2001, Dyn-O-Mat engineers dumped 8,000 pounds of their Dyn-O-Gel (an amount capable of absorbing 4,000 tons of water) over a small thunderstorm near the Florida coast. Within minutes, the storm disappeared from Doppler weather radar.

In a hurricane, the result would be two-fold. First, as the clouds dried out, the storm would wither. Then, as superchilled Dyn-O-Gel droplets fell into the ocean beneath a storm, they would further weaken it by cooling the warm water that fuels its growth.

Dyn-O-Mat’s founder and CEO, Peter Cordani, has already arranged to lease a specially rigged 747 “supertanker” to conduct trials on actual hurricanes. Meanwhile he has assembled an all-star team
of scientists from labs at Florida State University, the National Center for Atmospheric Research, NOAA and elsewhere to begin running computer models that analyze the gel’s effect on larger storms. “We already know the gel works,” says Cordani, who lost his home during Hurricane Frances. “Now we need to figure out how much to use and where to put it.”

Many scientists are skeptical, however. Chris Landsea, a hurricane expert with NOAA, wonders whether hurricanes are simply too big and powerful to respond to human-scale tinkering. “Thunderstorm activity alone could be equivalent to 200 times global electricity production,” he points out. “It’s just not physically feasible to make an impact.”