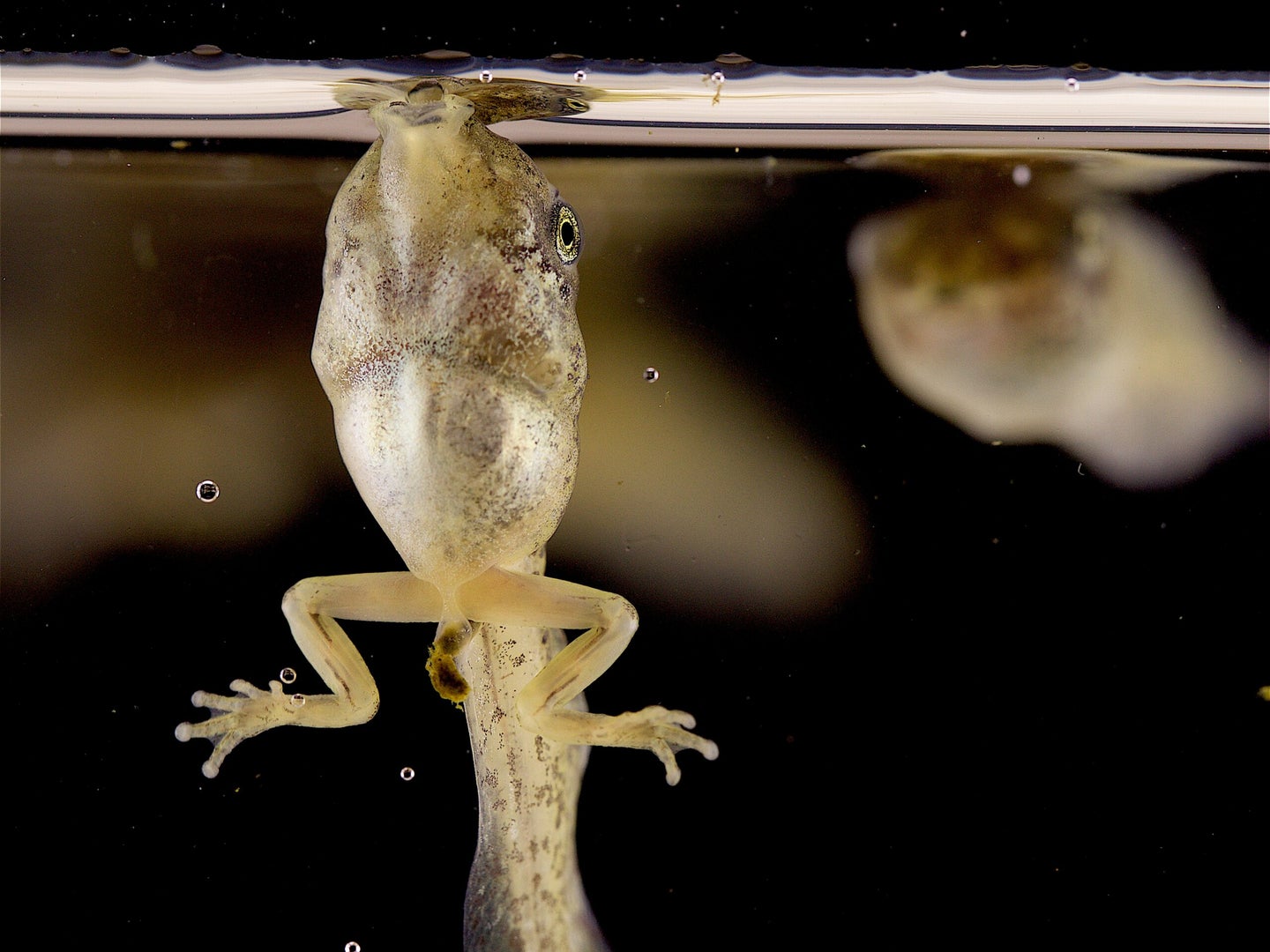 A tadpole of a gray tree frog sucks in a bubble full of oxygen—a clever workaround around having to fight against surface tension and get a breath of fresh air. Kurt Schwenk
SHARE

Blowing spit bubbles might seem silly or immature, but when you’re a tiny aquatic creature just trying to catch a breath, there’s a good reason for it.

A few summers ago, Kurt Schwenk noticed a splashy new behavior while watching baby tree frogs shimmy around a tank. “One came to the surface and did something strange,” the University of Connecticut evolutionary biologist says. “When it swam away it left a bubble behind.” Schwenk and his graduate student Jackson Phillips had planned to feed the tadpoles to salamanders for a study, but they quickly switched course. They thought the bubble could be a clue to how young amphibians flex their developing lungs without breaching the water’s surface.

To test their idea, Schwenk and Phillips set out for the New England swamps to collect tadpoles of four different species, along with spotted salamanders, diving beetles, and pulmonate snails. They also mail-ordered African clawed frogs, which were bred to have see-through skin. They then filmed each subject with high-speed monochrome cameras (capturing 30 to 1,000 frames per second) backlit with LEDs to see what was happening in the water, as well as the creature’s respiratory tract.

The videos, published with a recent paper in the journal Proceedings of the Royal Society B, helped Schwenk and Phillips come up with a timeline for the tadpoles’ breathing process. As amphibians grow, their gills morph into lungs. That transformation eventually forces them to stick their heads above water to gulp in air, but their puny bodies present a challenge. Water molecules form tight bonds with each other—a common physical property known as surface tension—so it takes a considerable amount of mass to break them. A half-inch tadpole barely stands a chance.

That’s where “bubble sucking” comes in. The delightful term, coined by the UConn scientists, refers to the tadpoles’ surface-tension hack: They blow a pocket of air onto the waterline, then wait for it to fill up with oxygen. Once it’s ready, they pull it back into their mouths and force it down to their lungs with a single inhale. This process is called buccal pumping, and is unique to amphibians. Humans, in theory, could bubble suck, Schwenk says, but we’d have to open our mouths to compress gas into our lungs—a feat that’d be difficult mid-swim.

Mammals aside, Schwenk and Phillips found that snails and beetles also form bubbles, but with their butts instead of their mouths. And while the collaborators didn’t film any fish, they think the behavior is much more widespread in larvae as they breathe and filter feed. “The fundamental lesson is that surface tension really represents a physical barrier to these animals. So now we should anticipate special adaptations,” Schwenk says. He notes that he’s seen twists on the adaptation, too: Gray tree frogs, for instance, perform a “double suck” as they approach adulthood, and mature green frogs sometimes “bubble suck for the hell of it.” Even so, there’s a method to the madness, and we’ll be waiting for the next round of filming to find out the details.