Aliens in our solar system can't hide from this miniaturized machine. 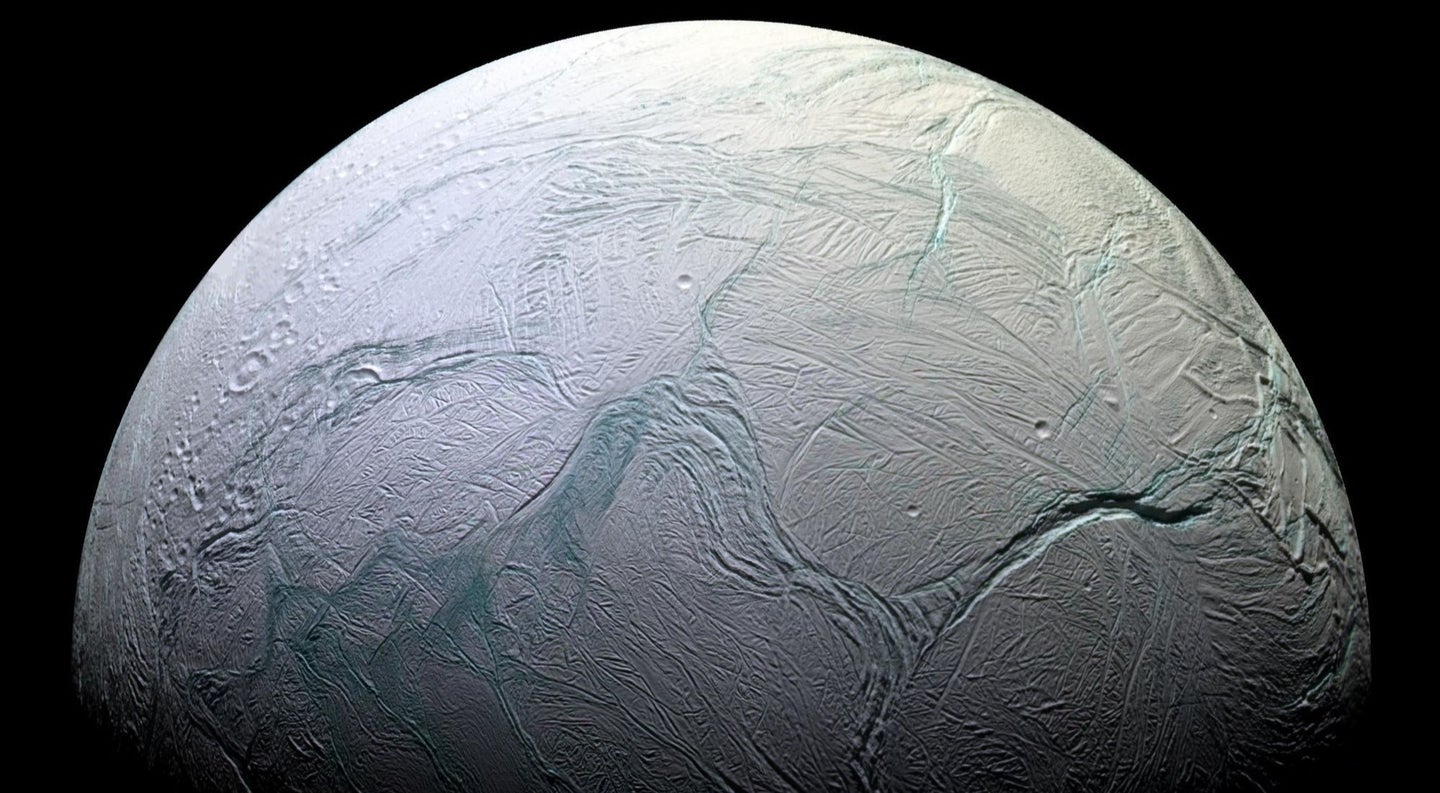 Saturn's moon Enceladus, captured here by the Cassini probe, could be one target for the device. NASA/JPL/Space Science Institute
SHARE

Sci-fi storytellers love to spin tales about laser-wielding aliens who visit Earth—but in reality, we’re the ones now using sophisticated laser beams to hunt for signs of extraterrestrial life.

Geologists and engineers at the University of Maryland recently created a new piece of technology, designed to fly in space, that uses light to analyze molecules. This work, published last week in Nature Astronomy, takes a common molecule-analyzing lab instrument here on Earth, known as the Orbitrap, and shrinks it down to make it compact and light enough to fit on a NASA solar system mission. They also combine the improved Orbitrap with a laser, which can break up material from a planet’s surface to prepare it for analysis.

“I am excited to see what kind of complex molecules we would be able to detect beyond Earth,” says Grace Ni, University of Maryland geologist and co-author on the study. “The next-generation Orbitrap analyzer offers about 200 times improvements” in the detail of its measurements compared to older systems, she adds. It could fly on missions within the next decade.

The Orbitrap is a tool for mass spectrometry, a go-to technique for scientists that separates molecules by their mass and measures how much of each there is in a sample. Although these machines are found in medical, biological, and other industrial labs across the planet, they’re also huge, weighing around 400 pounds—a little heavier than a giant panda. Offworld missions are often limited in how much they can carry to their destinations. One of these behemoth Orbitraps just would not fly. The new version, though, only weighs about 17 pounds.

[Related: The Milky Way could have dozens of alien civilizations capable of contacting us]

Plus, mission teams must often choose between one big component or multiple smaller tools. Selecting instruments for a space mission is “like choosing what tools you want on your pocket Swiss army knife,” explains Zach Ulibarri, an aerospace engineer at Cornell University who was not part of the new study. “But, at the same time, the tools on a Swiss army knife are smaller and lighter than the tools you keep in your garage, just like the instruments on your spacecraft have to be smaller and lighter than the full-sized ones you keep in a laboratory.”

Before it can measure a molecule, the upgraded laser-wielding tool uses ultraviolet pulses to break up the compounds from a planet’s surface—such as rocks on Mars, the icy outer shell of Enceladus, or other interesting targets for possible life in our solar system. It then funnels them into the miniaturized Orbitrap spectrometer, where the sample’s composition is measured.

Eddie Schweiterman, a University of California Riverside astrobiologist not involved in the new Orbitrap project, explains that this tool will take the “fingerprints” of molecules related to life, while also providing information about the surrounding geology of whatever planet or moon is being explored. Context is key for signs of life—scientists must be able to rule out non-living sources of the same life-like chemicals. This new laser-Orbitrap system would also allow scientists to do this detailed chemical analysis remotely via a straightforward robotic mission, like a lander or rover, as opposed to a sample return to Earth.

Although there is a lot of ongoing work to detect biosignatures on distant exoplanets, that’s a totally different ballgame than exploring the solar system with a probe via upgraded Orbitrap. The large organic molecules to be analyzed with missions featuring Orbitrap “cannot be easily observed remotely, particularly at interstellar distances,” Schweiterman says. Instead, exoplanets can only be observed from light-years away via our telescopes. But astronomers could send robots equipped with this tool to the surfaces of the planets nearest us.

There’s also one more catch. The large amount of data generated from the new system “could be a headache for data storage and transmission during a space mission,” according to Ni. Hopefully, as computer technology inevitably advances, engineers will come up with clever ways to deal with this problem. Even then, data storage isn’t a dream-killer for the Orbitrap—just another thing to consider when designing a spacecraft. As Ulibarri says, “each instrument has its own advantages and disadvantages. There is no perfect instrument; there are only trade-offs between different ones.”

Building a fully functioning spacecraft is always difficult, but new instrument technologies like the improved Orbitrap expand the possibilities for future missions. “It’s always exciting to add a new tool to the potential spacecraft toolkit,” says Ulibarri. “And the Orbitrap is a particularly powerful tool.”