A Brief History Of The Demise Of Battle Bots 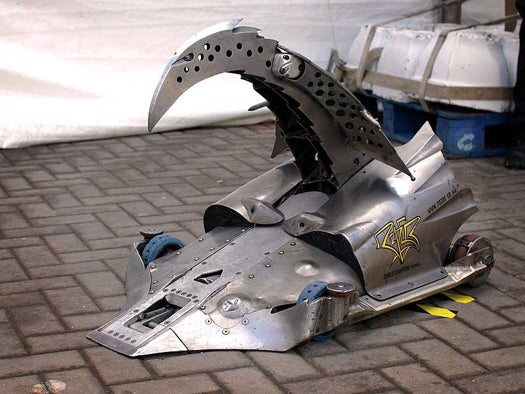 Robot battling was poised to become a true sport of the future. It had all the right elements: mad science, gladiatorial combat, plucky garage inventors, and televised action. So what killed it? A brutally effective, utterly simple machine called the wedge bot.

The wedge-style bot killed robot wars because it was invincible, which in the end made it boring. Yesterday SB Nation published a fascinating full history of BattleBots, which is a great, though giant, read.

But the mechanical evil that is the wedge bot deserves special attention. Competitions originally focused on robots using arms and blades and blunt objects to bash and slash and break each other apart. Wedge Bots had one simple, cunning attack: slide a wedge under another robot, flip it onto its back, and watch it flail about like a dying cockroach. Here is the timeline of how it managed to make killer robot duels boring.

1995
The wedge bot premiers! Compared with its blade-swinging, hammer-bashing competitors, it is a unique and clever alternative. No one knew what to make of it. It won handily, with speed and novelty making up for its admittedly dull design. Watch the death of the sport below:

August 2000
Televised robot competition “BattleBots” starts airing on Comedy Central. By the time the show ended in 2002, “robot Darwinism,” the term coined by battling robot pioneer Pete Abrahamson, has left the field with only three major robot archetypes:
1. Lifters, which had wedged sides and could use forklift-like prongs to flip pure wedges.
2. Spinners, which were smooth, circular wedges with blades on their bottom side for disabling and breaking lifters.
3. Pure wedges, which could still flip spinners.

What should have been an exciting, diverse sport is stuck at rock paper scissors.

Not only does “Robot Fighting League” ban wedge robots, but all of the machines are created by the same designer. If robot Darwinism made the game boring, maybe robot intelligent design can keep it intresting.