From mutton to masterpiece: The juicy history of the hamburger

The origin story of one of America’s favorite meals. 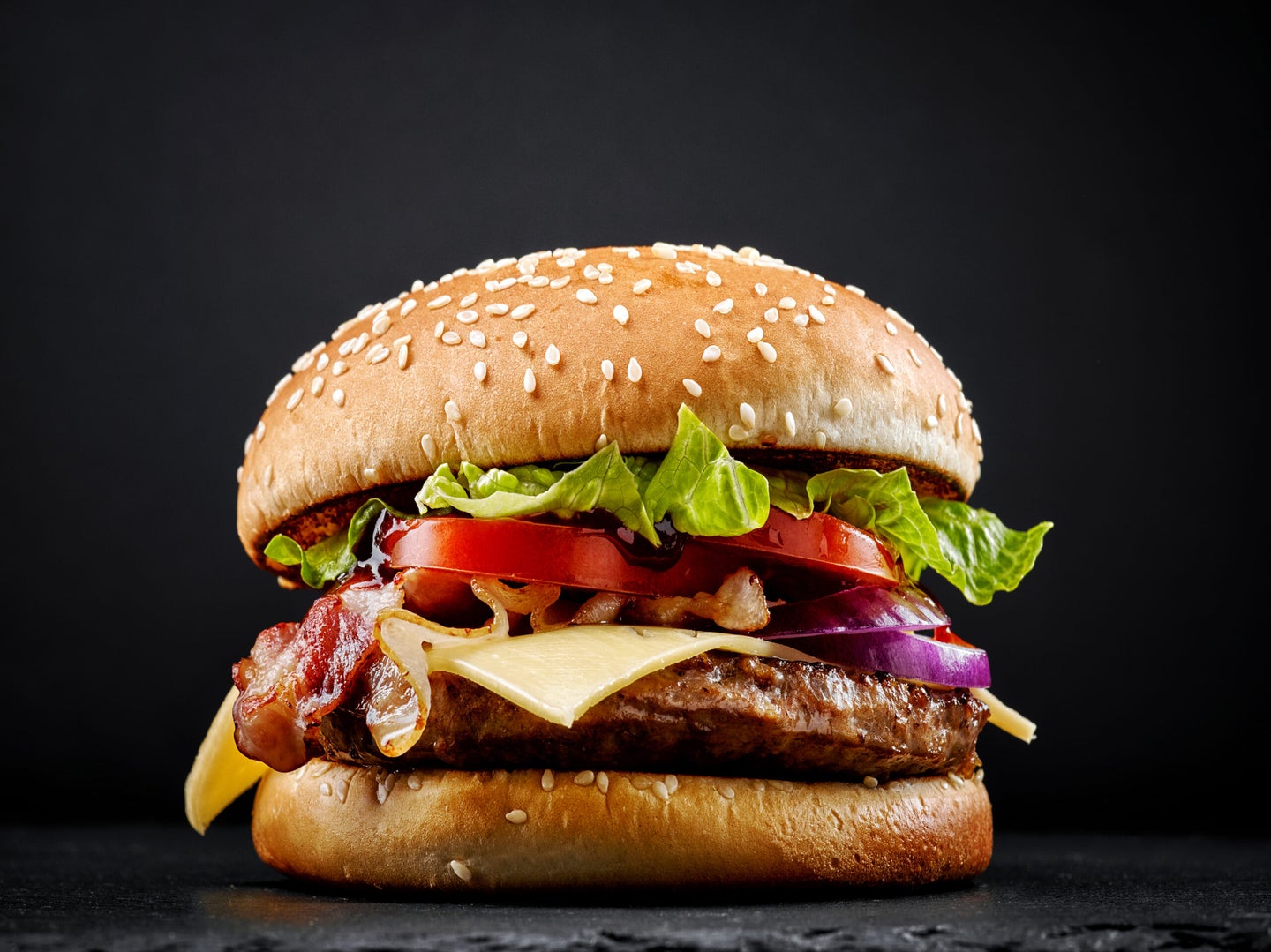 Last month, the PopSci staff elected to forgo red meat with the aim of minimizing our climate footprint. But now, in November, is there any better way to say farewell to No-Red October than with a hot, juicy hamburger?

The burger that you can pick up at your local McDonald’s, or even a fancy one with ingredients that have never seen the inside of a drive-thru, has come a long way from the original mashed up meat concoction that inspired it. We chatted with burger expert and filmmaker George Motz about how the burger came to America, and then to plates and hands across the globe.

From tartare to the state fair

The earliest hamburger relative, meat tartare, was born far, far away from the United States. It might sound French at first, and sure, the raw beef dish frequently served with rye and a raw egg can probably be found at your local French spot. But it’s origins are even farther east. Motz says this style of meat actually comes from the tartars, a group of people from modern-day Russia. Back in the 13th century, while riding around on horseback for days at a time, the tartars would put mutton—sheep meat—under their saddles to tenderize the meat, and then chop it up and eat it raw.

This meal sailed it’s way to port cities on the Baltic Sea, Motz says, eventually making it to Germany. The Germans were likely the first to put the traditional beef spin on it, and even started to cook it and plop it on a plate with onions and potatoes.

“It became known as nothing more than ‘chopped steak,’” he says.

Fast-forward to the 1800s, when people moved out of Europe and across the ocean. People would often head to their new homelands out of the port of Hamburg, Motz says, and while they were there, probably chow down on a few plates of German “chopped steak.” Fond of the meal, they brought the recipe with them over to the Americas.

Across the Atlantic, people started making “steak in the style of Hamburg” in New York, and the dish eventually trickled into state fairs across the east coast and the midwest. But have you ever wandered around a state fair with a steak on a plate? It’d be a bit cumbersome to carry around while riding the Ferris wheel or observing butter sculptures. So, like hot dogs, Motz says someone eventually came up with the brilliant idea to make the Hamburg steak portable: toss it on some bread.

This wasn’t exactly a groundbreaking idea, and it actually popped up independently quite a few times in different parts of the country around the turn of the century. The longest-running burger joint is located in New Haven if you’re curious about what a burger from the late 1800s was like. (It involves nixing any condiments and slapping the meat on toast, not a bun!)

“It wouldn’t have really been newsworthy,” Motz says of the moment someone slapped a chopped steak on bread. “It wouldn’t have even been in a cookbook.” With this one seemingly insignificant development, the burger as we know it today was off the ground. But one name changed the game of hamburgers forever.

The era of White Castle

“The real hero of the hamburger world, of its entire history, is the company White Castle,” Motz says. White Castle might not be the biggest name in the fast-food business anymore (there are only two open locations in Manhattan, compared to the several dozen McDonald’s littered throughout the city), but it cleaned up the burger’s public face in a moment when it could’ve nearly become obsolete.

In 1906, Upton Sinclair published The Jungle, effectively scaring a lot of people away from industrial meat—and for good reason. It was unregulated, which meant all sorts of things could go wrong, from rotten meat to rat droppings, before you bit into a burger.

Over in Wichita, Kansas, Motz says White Castle started off as a shoe stand that transformed into a four-stool hamburger joint with the aim of making a quick buck. Billy Ingraham, one of the founders of White Castle, quickly took notice of a particular group of customers: boys who’d buy sliders from the stand, and then jump in a car to head back to the wealthy part of town.

Motz says this showed that the burger had some kind of value, especially if rich folks were still sneaking around to get them when they weren’t in vogue. White Castle took it upon itself to clean up the burger’s image to cater to that wealthier clientele. To get it back in society’s good graces, they used white-colored imagery, in-house meat grinding, a uniform of crisp shirts and hats, and standardized their hamburger product—everything from bun to patty to topping was consistent.

Within three to four years, Motz says White Castle had started a trend. You simply couldn’t sell a burger anymore if you didn’t have “white” in the name.

“They basically saved the hamburger from its imminent demise,” Motz says.

After World War II and the depression, it seemed like hamburgers had found their ideal partner in crime—cars. Speedy food that you could get without even taking your hands off the wheel became ideal, says Motz. The trend dates back to the 1920s when carhops started leaping on the front ends of moving vehicles to take orders while that car drove up to the burger joint. The carhops would get their order information while simultaneously catching a ride back to the joint’s kitchen for optimal speed and efficiency.

The carhop establishments as we picture them today—girls rolling around on skates taking the orders of people driving up to a burger joint—were never very efficient. McDonald’s was the first to famously “fire the carhops,” Motz says, in what was initially a risky business move.

But it turns out, by just having people park and walk inside, companies saved time and cash from not having to pay carhops. The next significant development was the drive-thru and the talkback box, pioneered by Harry Snyder of In-N-Out, Motz says. That convenience leads to further optimization of getting the burger into the hands of the customer, like the creation of the patty machine, which eliminated a lot of extra time needed to shape the meat by hand.

As hamburgers became remarkably quick and easy to produce, the dish started to catch on around the world as a fast-food commodity. McDonald’s went international by the mid-60s, and big names like Wendy’s and Burger King appeared on the scene soon after. “The American hamburger was exported, not as a mom and pop item, but as a fast-food item,” Motz says.

What started as a quick meal with “soul to it” had become a corporate moneymaker that took over the world by the mid-20th century. Though the hamburger was a worldwide phenomenon, Motz says it was a shell of its former glory, and it soon fell back down to cheap, poor-quality food status.

In the 1990s, French farmers really, really didn’t like McDonald’s, partially because the fast-food joint represented la sale bouffe, or tasteless, mass-produced food. But one man saw the potential of hamburgers: famous French chef Daniel Boulud. He put a burger made with foie gras, tomato compote, and a brioche bun on the menu at his luxurious restaurant db Bistro Moderne in New York. Boulud’s recipe today remains unchanged, even though he’s been making them for over 15 years.

“He was the first person to actually put a gourmet burger on a menu, where it really shouldn’t have been there,” Motz says.

Boulud might not be the originator of the fancy burger concept, kind of like how we don’t know who first stuck a hamburg steak on bread. But Boulud’s methods held—a new renaissance of the burger had begun.

Some of the priciest burgers in major cities can cost you a serious chunk of change. One burger sold in Las Vegas will cost you several thousand dollars, though it is thankfully served with a bottle of wine, not just Diet Coke in a styrofoam cup like you’d get at a drive-thru.

In a way, this era of fancy burgers is a bit like the time when burgers were first gaining ground in America—each one is made with special intention, and doesn’t follow a cookie-cutter mentality. Standardization isn’t necessarily the only way to go.

So whether your favorite burger is one you can get in a minute or two, one hand prepared in a state-of-the-art kitchen, or somewhere in between: there are years and years of history grilled into every bite.