The hibernation science in ‘Passengers’ is not far from reality

Suspended animation may help us survive interplanetary travel, but it won't keep us alive for 120 years 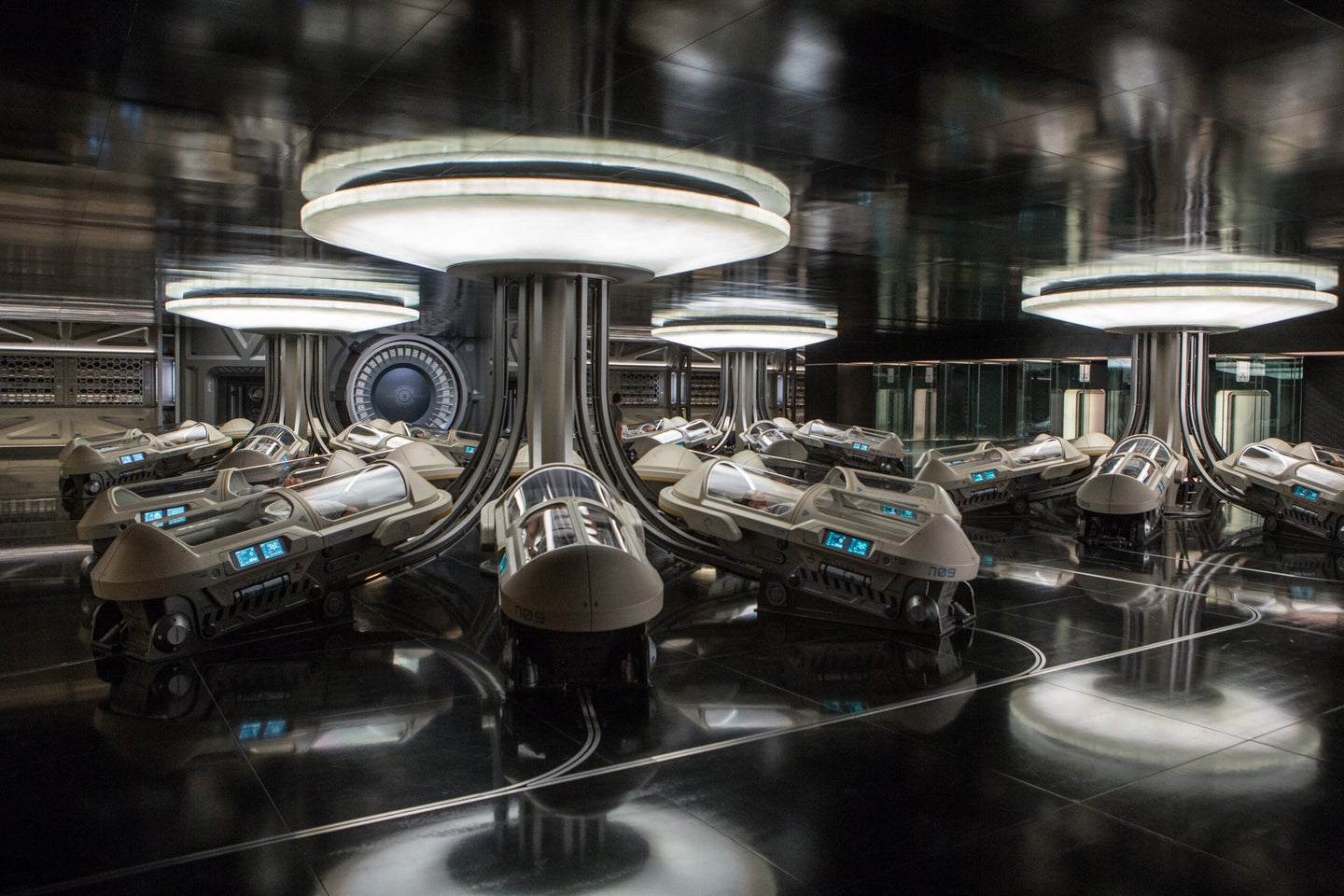 Before humans travel to another planet—and that day may be coming soon—a question will need to be answered: How will astronauts spend their time on a months- or years-long interplanetary voyage?

In the movie Passengers, which hits theaters today, more than 5,000 people board the starship Avalon on a 120-year journey to a new world called Homestead II. Prior to launch they each enter a “hibernation pod,” which, through drugs and environmental controls, puts them into a suspended animation. Essentially, they’re meant to sleep through all but four months of the century-long trek.

Currently, humanity is nowhere near ready for the interstellar journey that Jim Preston (Chris Pratt) and Aurora Lane (Jennifer Lawrence) undertake, but this sci-fi hibernation technology is actually grounded in today’s reality. NASA is helping to fund the research of SpaceWorks Enterprises, a company that aims to put astronauts into artificial hibernation through a process similar to that depicted in Passengers.

NASA’s “Journey to Mars” has the space agency aiming for a crewed mission to Mars in the 2030s, and SpaceWorks President/COO John Bradford thinks the hibernation technology can be ready for that first mission.

To set this artificial hibernation in motion (or, rather, not in motion), SpaceWorks would lower a person’s core temperature to 32 degrees Celsius, then sedate her to stop the body’s natural defense against the cold—shivering. Hospitals use this practice, called “therapeutic hypothermia” or “targeted temperature management,” when a patient with a traumatic injury, such as cardiac arrest, needs extra time to heal due to lack of blood flow. The lowered temperature sets the patient into an unconscious-like state and acts as a neuroprotectant, slowing down his metabolic rate and lowering his risk of ischemic injury (tissue damage from lack of oxygen and other nutrients due to low blood flow). Once he’s recovered, doctors can warm him back up and address other injuries.

However, patients are usually kept in this state for only a few days; the longest it has ever been tested was a 14-day study in China, which showed no lasting or negative side effects on the patient. Bradford thinks SpaceWorks can advance the current technology to extend that timeframe for a healthy person.

“It’s closer to reality than it sounds, but there’s still a lot of questions, and a lot of development that needs to occur,” he admits.

Instead of one long hibernation, like in Passengers, crew would go through staggered two-week stasis periods, says Bradford. After two weeks of hibernation, a crew member would be resuscitated, recover for a few days, and then go back into hibernation for another cycle. “Our medical team is more concerned about the duration of any one cycle versus repeat cycles,” says Bradford, “because there doesn’t seem to be any lasting or long-term impacts on the recovery period.”

In Passengers, a computer monitors the functions of the ship and those aboard it. But in real life, Bradford says there would always be at least one person who is awake to take care of the crew and systems during the initial trials. As the technology gets better, though, SpaceWorks would like to extend the duration incrementally until it is able to suspend astronauts for the entirety of the transit to Mars. An IV line filled with a nutrient-packed liquid (called “Total Parenteral Nutrition”) would sustain the astronauts while they’re unconscious. SpaceWorks’ proposed ship is designed to reduce mass and utilize space efficiently. The hibernation modules are in the middle section.

Unlike the Homestead Company (which manufactures and runs the Avalon in Passengers), SpaceWorks won’t stop the aging process and prolong human life. So the Avalon‘s passengers would have arrived at the new colony 120 years older than when they left Earth.

But the technology could make long-duration spaceflight a lot more efficient. While the Avalon has drawn comparisons to the Titanic for its size and glamour (and to the movie Titanic for a love story set on a sinking ship), SpaceWorks is actively working to reduce the amount of space each person needs on the spaceship.

If astronauts are asleep, fewer resources need to be invested in living quarters, accommodations, food, etc., and more can be spent on finding technologies to speed up the trip and protect the crew, such as thicker radiation shielding. “We’re doing it for the purposes of reducing how much food and consumables people need, and to be able to package people in a small space,” says Bradford. SpaceWorks thinks it can reduce the mass of a NASA vehicle by 52 to 68 percent, depending on the configuration.

Smaller spacecraft could make exploring the cosmos a lot cheaper, which, in turn, brings us that much closer to real-life interplanetary exploration.