We're getting our closest view ever of the 10,000-mile-wide storm. 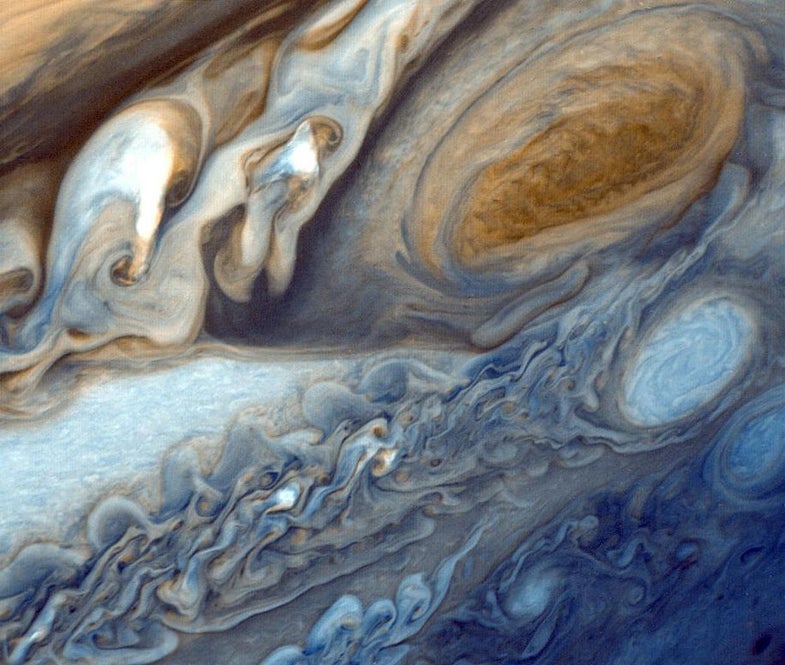 On July 10, the Juno spacecraft will get close enough to peer beneath the veneer of Jupiter's Great Red Spot. NASA
SHARE

Humankind has been ogling Jupiter‘s Great Red Spot through our telescopes for more than 300 years. The Voyager and Galileo missions brought us closer to understanding where this 10,000-mile-wide storm comes from, but it’s still swirling with mysteries. Well, it better get ready for its close-up: Next week, NASA’s Juno spacecraft will come closer to the furious tempest than any spacecraft ever has before, hopefully solving some of those mysteries in the process.

On July 10, Juno will fly directly over the Great Red Spot, passing about 5,600 miles above the glaring eye. During the flyby, all eight of the spacecraft’s instruments will be turned on to gather data, including its camera.

Scott Bolton, who heads up the Juno mission, says the team is looking forward to exploring a variety of questions when the spacecraft gets there. “The most basic one is: what’s it look like when you get really close?” says Bolton. “That’s sort of a fundamental question, and there are scientific questions of course that are tied to that.”

Although Bolton can’t say for sure what Juno will find when it gets there, he’s hoping the cameras send back stunning images—which isn’t too much to hope for, since the spacecraft is already sending back remarkable shots of other parts of the gas giant.

The data may reveal new details about how this massive storm, with winds whipping as fast as 425 miles per hour, and Jupiter’s atmosphere in general, work. Instruments on the probe might help to explain where the storm gets its red coloration, and could even peer below the surface of the storm for the first time ever.

“It sees through the cloud tops, and we can investigate how deep the [storm’s] roots are,” says Bolton. “Do we see a signature at all underneath the cloud tops, or is it just a shallow feature? That helps us understand maybe how it’s made, and why it’s lasted this long.”

Although many scientists think the storm’s roots must go very deep into Jupiter’s atmosphere, Bolton says Juno’s observations could potentially throw out that hypothesis. “Until now, we’ve never had any kind of instrument that could see below the top layer, the veneer, of Jupiter.”