The chemical composition of fresh fruit flavor is surprisingly complicated. 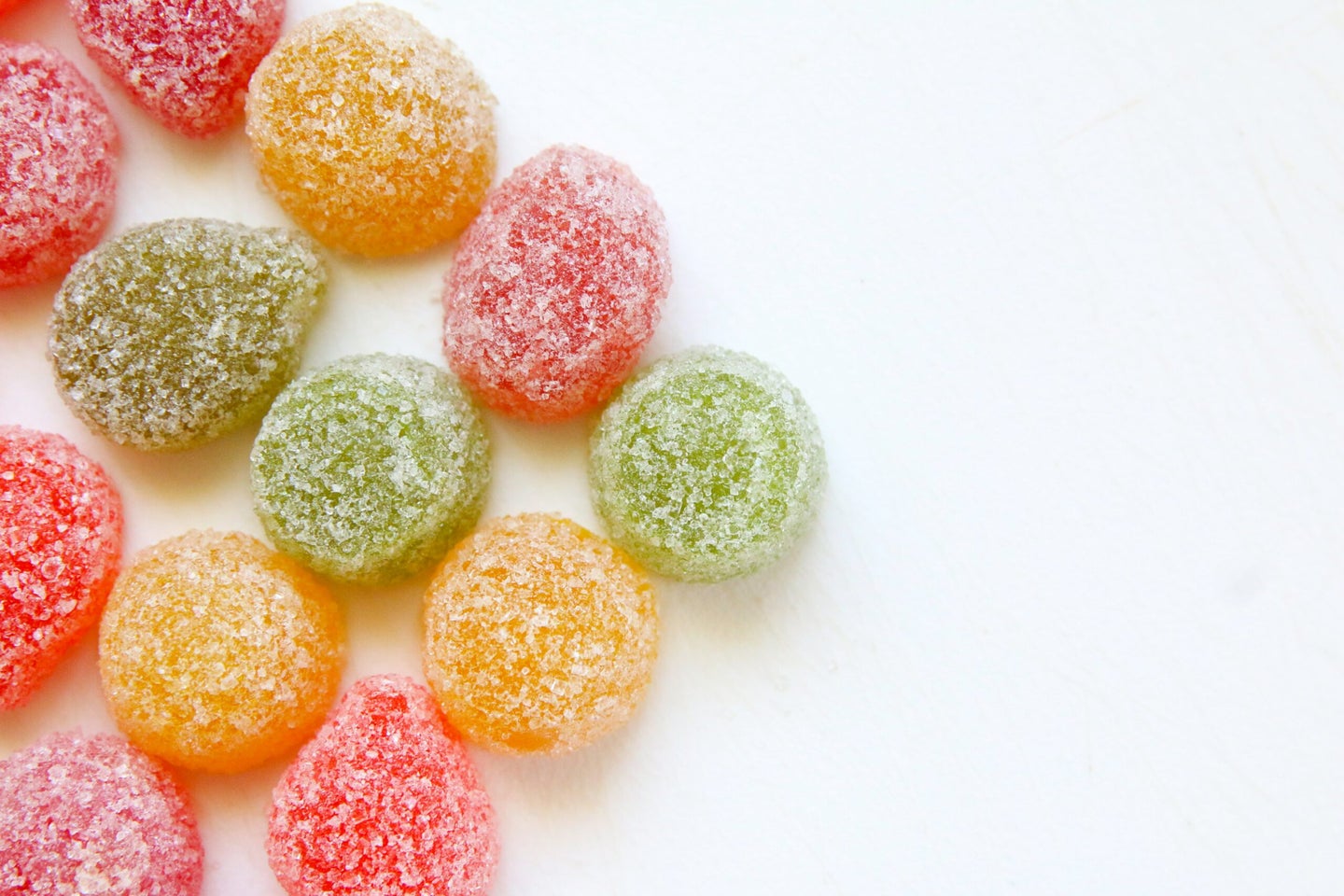 Fruit-flavored candy used to be very hard to get to taste like real fruit. Glen Carrie/Unsplash
SHARE

No one expects a banana Laffy Taffy to taste like an actual banana. But the reason has nothing to do with some old timey banana—it has to do with chemistry.

Legend has it that the reason artificial banana flavor tastes so strange is that the taste is actually based on the variety we used to eat, called the Gros Michel, before it succumbed to a fungal disease and we replaced it with the Cavendish. It’s true that the Gros Michel variety tastes more like the artificial stuff than do today’s bananas. But the connection stops there. The truth is flavor manufacturers were never going for that particular essence. Banana flavoring is and was bad for the same reason strawberry bubble gum and grape soda don’t taste like the fruits they’re named for: Chemistry is hard.

“In the 70s, if you bought strawberry bubble gum it was this thing that we referred to as artificial strawberry flavor,” says Paul Breslin, a professor of nutritional science at Rutgers and a member of the Monell Chemical Senses Center. “It was a weird state where you knew what they were going for, but you also understood that it was really missing something. They just had not nailed it.” That’s because of built-in assumptions flavor manufacturers had at the time, he explains. Chemists make strawberry flavor by first mashing up an actual strawberry. Then, they analyze the chemicals that waft from the mash into the air. At the time, everyone assumed that the most abundant, volatile molecules would be the most important. That’s kind of true, according to Breslin, but less isn’t always more. “You don’t have to take all 400 to get strawberry odor. You can get it by grabbing 20 or 30,″ he says. “But in the ‘70s they were just grabbing two or three.”

A few chemicals is enough to give you a hint of the flavor—artificial strawberry does somewhat resemble real strawberry. In some cases all you need is one molecule to give you the flavor’s essence and for you to make that instant connection. Isoamyl acetate, the primary component of that artificial banana scent, is immediately recognizable as banana. It’s just not enough to be a convincing facsimile of the real fruit.

What brought us into the modern era of flavoring was paying attention to more than just the most common, most volatile chemicals. “Very small concentrations of certain molecules—even those that might not seem related to the overall fruit flavor—end up influencing our perception of the taste. “In stone fruit like peaches and in a lot of berries, like raspberries, and even in grapes—particularly in some wines—there’s a chemical that if you smell it on its own smells like cat urine,” Breslin says. “So you’d think, ‘why would I want to put that into my raspberry flavor? I don’t want my raspberry to smell like a cat litter box.’ But unless it’s there it won’t smell like raspberry. To leave it out is a fatal error.”

Today, chemists can whip up much more realistic flavors because they know to include more of these minor chemicals. That wisdom, along with much better technology to analyze and isolate these individual molecules, has led companies to develop fruit flavors that actually taste like the fruit itself.

Candy still tastes fake simply because we’ve come to associate those flavors with the candy itself. Nowadays, flavorists could make Laffy Taffy taste much more like a real banana—they just don’t need to. We got too used to the fake stuff. In fact, Americans were probably introduced to artificial banana before the real thing. The actual fruit didn’t become popular stateside until the 1876 Philadelphia Centennial expo, but banana flavor showed up in the 1860s. At the time, it was the Gros Michel banana that was widely eaten, which happens to contain more isoamyl acetate than do Cavendishes. So the truth is, to American tastebuds at least, Gros Michels happen to taste like fake banana flavor, not the other way around.

A few of the other iconic candy flavors also came about for related reasons. Cherry flavor was meant to taste more like cherry liqueur or wild cherries than the stuff we eat today, and grape flavor is based loosely on Concord grapes, not the tart items we mostly consume. All these were mostly developed in the late 1800s or early 1900s, so manufacturers’ understanding of the chemistry of flavor was even more limited than it was in the artificial strawberry era of the 1970s.

The good news is, the analytical approach means we can now replicate almost any flavor we want. Bertie Botts Every Flavor Beans, for instance, were likely created by exactly the same principle as were peach jelly beans. “If you’ve vomited, you know what vomit tastes like, you may not have eaten earwax but you know what it smells like,” explains Breslin. “If you know how to make a peach flavor or a strawberry flavor, then it’s the exact same process for earwax or vomit.” Bless modern engineering.