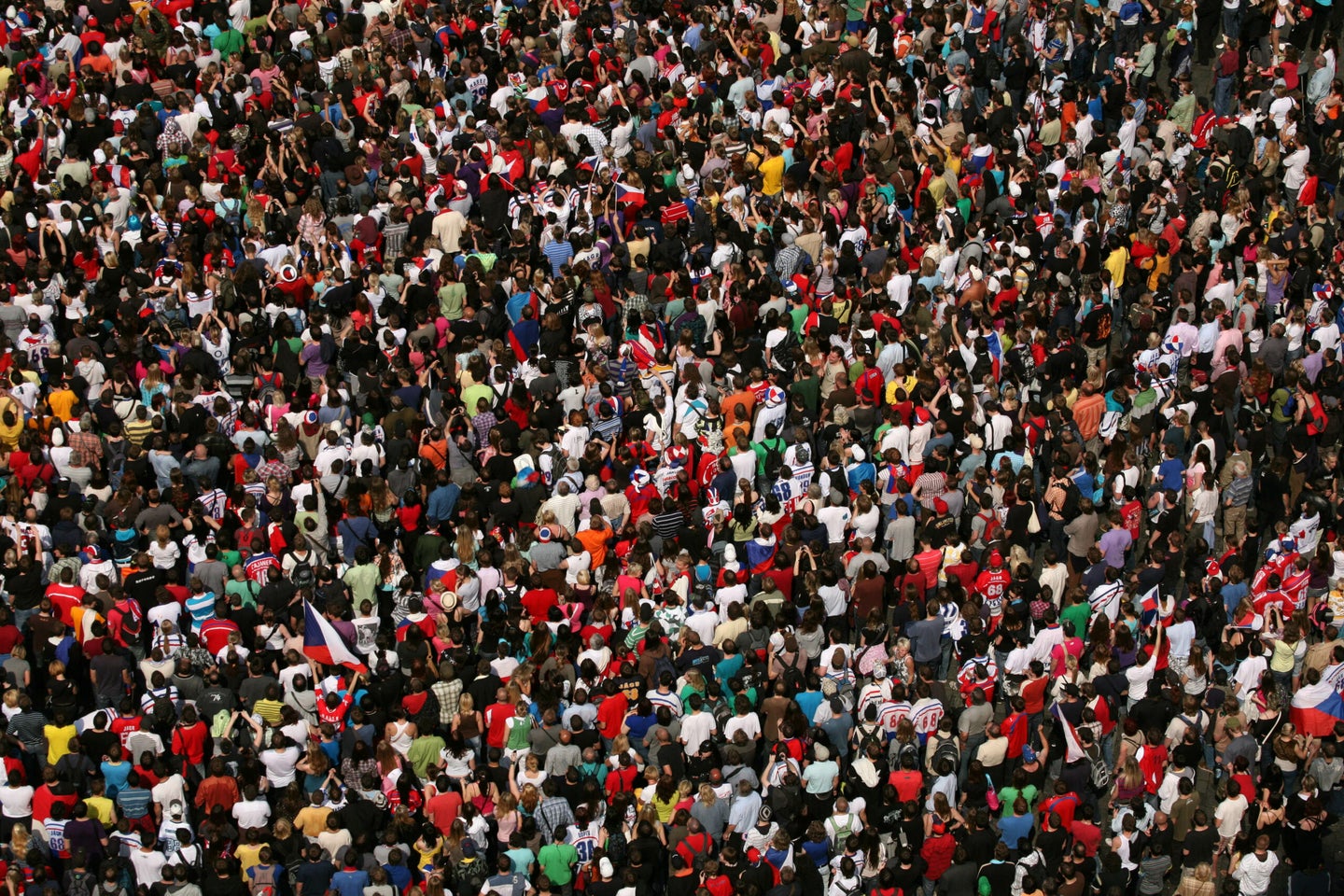 On December 11, 2017, a pipe bomb detonated at the Port Authority bus station in New York City. Five people were injured from the blast, but no one was seriously harmed in the quick evacuation that followed.

That’s not always the case. In 2005 reports of a bomber in Baghdad left 960 people crushed to death on a bridge. A 2015 stampede in Mina, Saudi Arabia, the city where pilgrims stay while visiting the holy site Mecca, killed 800. In 1989, 100 people died due to crowd crush during a soccer match in Sheffield, England. But while it may be easier said than done, experts say the best thing to do in these situations is to take a deep breath and try to think logically.

Researchers study these incidents, as well as the ways that large groups of people normally behave, in order to understand how to design public spaces. They want to make stadiums and bus stations that are as safe and efficient as possible. Ioannis Karamouzas, a computer scientist at Clemson University, researches how people move normally—and when an outside stressor, like a loud sound or gruesome view, causes them to panic.

Pedestrians usually keep a general awareness of the people surrounding them, though that may not seem true when a casual walker gets shoved in the street. We are constantly calculating how fast the people around us are moving and what direction they are going in. Pedestrians become more and more uncomfortable as collision looms. “You don’t want to bump into other people,” says Karamouzas. For example, people who are moving quickly will tend to drift towards the outside of a sidewalk to avoid crashing into the loafers in front of them. We all collaborate to create (mostly) crash-free pedestrian venues, even if we don’t make eye contact.

Humans still follow this principle in more crowded situations. Think of a live concert. People are always looking for the slightly more open space in front of them (though the best music quality is usually where the sound engineer sits). This leads to a wave pattern of movement as everyone fills in the empty space and squishes closer and closer together.

The situation escalates when there are no longer gaps to move around. The external stressors mentioned above, like explosions or violent arguments, compound the issue. People become more aggressive, and are no longer afraid of running into others. After they fill in the available free space in whatever direction they are trying to go—probably away from the disaster—they begin to move chaotically, desperately trying to find free space. When both density and anxiety is high, accidents happen. “You are trying to find some air,” says Karamouzas. “You don’t care if you hit somebody.”

Researchers are reluctant to give explicit advice about how to behave in emergency situations, since it’s hard to proselytize without knowing the exact situation. But G. Keith Still, a professor of crowd science at Manchester Metropolitan University, says that if a person can calm down for even a few moments to assess the situation, they have a better chance of survival. His student researchers have noticed a rise in injuries due to perceived threats, rather than actual threats, and Still thinks that might be due to our enhanced collective sensitivity to danger. Increasingly, we all see violent events daily via the internet and television. We’re primed to assume the worst and panic.

“People running without thinking, that has been the cause of many different serious injuries lately,” he says. “Assess, don’t react. It might only take a few seconds to change your outcome.”