The universe may be a giant video game, but it certainly isn’t Pac-Man

How to interpret one popular Flat Earth theory. 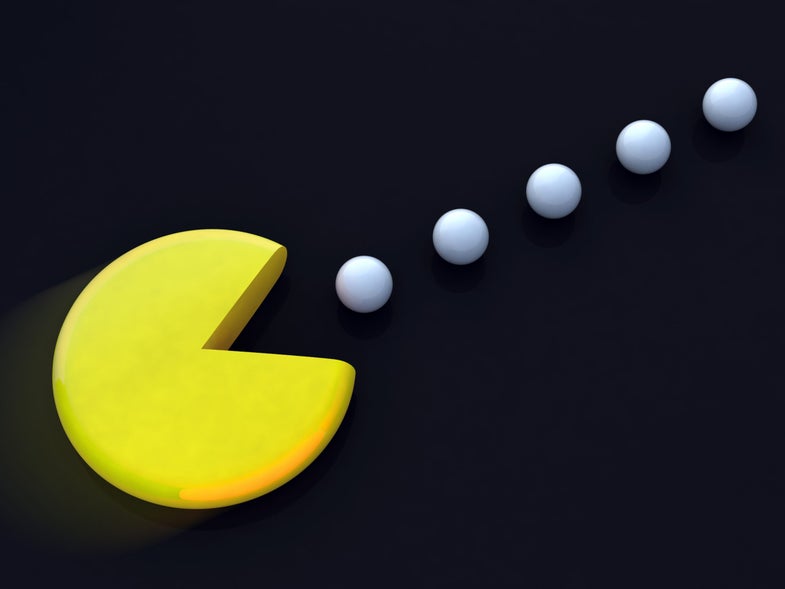 Elon Musk and other prominent Silicon Valley kooks may hold the belief that we live in a simulation, but one conspiracy theorist speaking at the Flat Earth Convention in England last weekend articulated an even stranger theory about our home, the Earth: the ‘Pac-Man effect.’

Flat Earth belief is what it sounds like, but there is some nuance: though Flat Earthers avowedly don’t trust scientists and generally think NASA is a giant conspiracy, their central tool for refuting the Earth’s roundness is basically aligned with the scientific method. After all, from the perspective of any one individual, the Earth does appear to be flat. Some observable phenomena line up with this basic perception, but others—like east-west plane flight, which shouldn’t be possible if the Earth was a disk, or a diamond, or any other flat shape considered by Flat Earthers—do not. This conflict has led many in the Flat Earth community to come up with conceptual write-arounds to explain the presence of these phenomena that don’t fit in their world-view. Here are a few of their theories—and why they don’t line up with what we know.

According to Darren Nesbit, a speaker at the convention, this “effect” (think ‘Mandela effect‘) explains why planes seem to fly east or west around the Earth with no observable change of direction. It also answers the age-old question of why Renaissance sailors never sailed off the side of the Earth, though the idea that they expected to is a modern one. They also knew that the Earth was round, though map-makers of the time underestimated its size.

In Nesbitt’s thinking, when a plane flying east (for example) reaches the edge of the Earth, it disappears and reappears at a corresponding coordinate at the western edge–just like in Pac-Man. The reason, he told convention-goers, according to The Age’s Wil Crisp: “space-time wraps around.”

Nesbitt might be thinking of something related to general relativity, the curvature of space-time, which is an accepted part of scientific thought. But if you’re ever in an airplane and you hear that characteristic “waka-waka-waka,” it’s just the engine.

If this or another other Flat Earth theory were true, says volcanologist Janine Krippner, “a lot of scientists would have been very excited about it.” But the same basic scientific tool that Flat Earthers are committed to using—observation—applied to the volcanoes she studies clearly demonstrates that the Earth has to be a rough sphere. On a flat surface,it wouldn’t be possible for the Earth’s plates to constantly rub against each other, causing volcanoes to form. They’d just slowly push away from one another or float in place.

“It’s good that people are questioning what they read,” Krippner says. But it’s when skepticism deteriorates into dogmatic distrust of all science that it becomes a problem, she says.

Other ideas floated at the convention

Nesbit’s idea might have the catchiest name, but it was only one of many ideas presented. Another relied on smartphone app tracking of the moon cycle. David Marsh, an administrator within the British health system, claims his research “destroys Big Bang cosmology,” according to Crisp, and demonstrates that electromagnetism is the only force in the universe.

Beliefs like these ignore numerous observable physical processes that wouldn’t be possible on a flat world, Krippner says. From weather to currents in the ocean and the movement of the tectonic plates that she studies, there’s a lot there. Understanding it just takes a little more than standing outside and staring at the seemingly flat horizon.

Still, Krippner says she doesn’t want to mock anyone’s beliefs. It’s important to understand that scientists are “just people,” she says. Many, including herself, got into it because they believe the things they study can benefit humanity.

“A very important part of science is disagreeing with each other,” she says. In that instinct, Flat Earthers are right on the mark. It’s just the fruits of that disagreement—the working toward a demonstrable scientific consensus—that could use a little work.

Need more evidence that the world is (roughly) round? We’ve got you covered.