No one knows what to do with the International Space Station

Congress has only approved funding through 2024. What happens then? 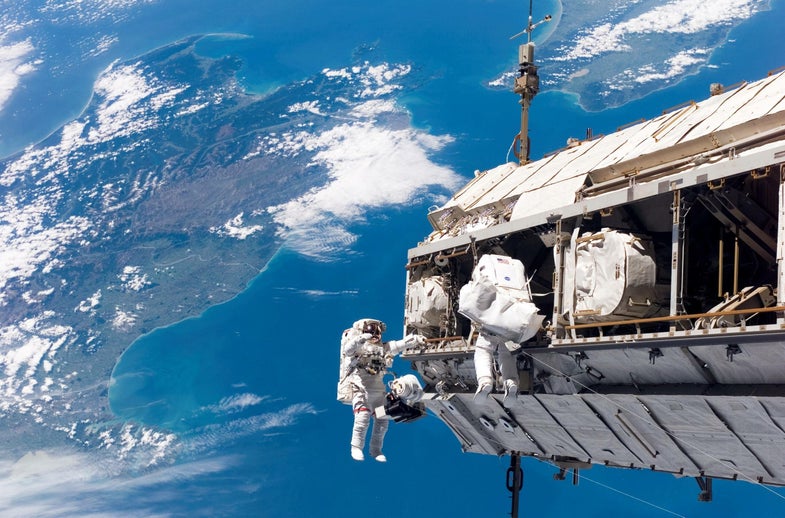 In 2024 the clock will run out on the International Space Station. Maybe. That’s the arbitrary deadline that Congress imposed back in 2014, at which point they’ll have to decide whether or not to keep funding the ISS. And yeah, that’s a whole seven years away. But then again…it’s only seven years away.

The ISS takes up half of NASA’s human exploration budget—half of the pile of money allotted for things like sending humans to Mars or to an asteroid. And if they want to push further into space exploration, NASA can’t keep sinking three to four billion dollars a year into the ISS. Not that it’s really their decision. Congress—specifically the House Committee on Science, Space, and Technology—decides how much money NASA will get. And because politicians aren’t experts in space travel, they keep holding hearings to discuss what they could possibly do with the ISS in seven years’ time. Let private industry take it over? Let it crash and burn into the South Pacific? Let the program keep running? The latest hearing took place last week.

These are hard questions, in part because people have very different opinions on what’s valuable about NASA, and therefore about whether the ISS is still useful. Maybe you think that NASA should really be about exploration, about pushing the boundaries of what we know and where we can travel. In that case, the ISS might not be your first priority. That’s a huge chunk of the budget that goes toward bringing things back and forth to low Earth orbit instead of venturing to other planets.

On the other hand, part of the way NASA can learn how to send people to other planets is by experimenting on the ISS. It’s a micro-gravity environment that’s relatively unshielded by the Earth’s atmosphere, which means scientists of all disciplines can send experiments up to see the effects of space on almost anything. Beer. Plants. Water bears. Heck, we’re still seeing how long-term residency in low gravity affects the human body. And though some politicians in the most recent hearing questioned whether the money that’s already been invested in the ISS has been worth it, the committee doesn’t have the best track record when it comes to supporting good science.

We don’t want to fall prey to the sunk cost fallacy, but it does seem a shame to abandon a massive project just after we’ve finished building it. The ISS has had significant upgrades since assembly began in 1998, and it was only in the last few years that the final modules went up.

None of this is to say that the ISS should be funded forever. With the rise of private space travel companies like SpaceX and Virgin Galactic, the ISS could be taken over by industry some day, especially if other companies interested in developing products for use in outer space would pay big bucks to experiment on board. Or maybe Elon Musk will decide he wants to turn it into his own private vacation house. Who can say?

The key here is to actually decide. To take in all the information available, evaluate it, and make a move. Seven years might sound like ages, but it’s not a ton of time to make a crucial decision. It’s unlikely that NASA is going to get a budget boost big enough to allow them to pursue all avenues, so this funding question will push the agency down one route or the other. The ball’s in your court, House Science Committee. It’s time to make a move.