And they’re way more powerful than real lightsabers would be. 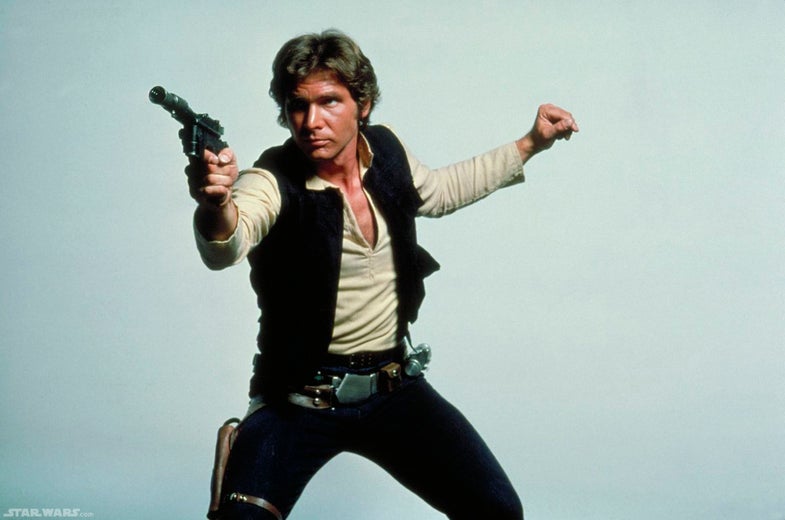 People who think physics is boring couldn’t be more wrong. It can explain everything from spooky interactions on the tiny scale of atoms and particles to how the entire universe behaves. As if that wasn’t enough, it can also be used to assess how realistic futuristic technology in science fiction is. My area of expertise—plasma physics—can explain many aspects of both lightsabers and the Death Star within Star Wars lore, for example. I’ve now worked out how feasible the blaster weapons used by, among others, the Star Wars character Han Solo are—and how they compare with lightsabers. In fact, real life versions of these weapons have already been developed. So with the prequel film Solo: A Star Wars Story being released, it seemed fitting to share this “research”. The key to understanding Star Wars technology is plasmas, a so-called “fourth state of matter” (in addition to solids, liquids and gases). This comprises freely flowing electrically charged particles which naturally interact with electric and magnetic fields. Plasmas are common in space but they rarely exist naturally on Earth. However, it is possible to produce them in laboratories.

A common misconception about blasters is that they are laser weapons. But within the Star Wars canon, people realised that this wouldn’t make sense. Instead, writers stated that a blaster was “any type of ranged weapon that fired bolts of intense plasma energy, often mistaken as lasers” and that it “converted energy rich gas to a glowing particle beam that could melt through targets”. This means that blaster bolts (glowing projectiles) are simply blobs of plasma—similar to a lightsaber flying through the air.

Coherent masses of plasma and their associated magnetic fields are known as plasmoids. Within the Earth’s protective shield in space—the magnetosphere—plasmoids are commonly generated by a poorly understood process called magnetic reconnection. This is an explosive reconfiguration of magnetic field lines that can take place wherever there is plasma present, in particular when plasmas are forced together. When this happens in our magnetosphere, charged particles are accelerated into the top of the atmosphere causing the aurora, or northern lights. A huge amount of material is also ejected away from the Earth as plasmoids.

However, it isn’t easy to create plasmoids on Earth. Many of the demonstrations that we can do (unlike the ones in space) produce structures which quickly expand and dissipate in the air. The solution to this problem is to use magnets—their fields can contain the hot plasma.

However, blaster bolts are projectiles so it’s not possible to have an externally powered magnet present at all times during their rapid journey. Thankfully, though, there is a solution. As plasmas are highly conductive, it is possible to set up electrical currents within the plasmoid itself. These currents, like all currents, generate magnetic fields that can confine the plasma. Such arrangements are known as spheromaks and they have received renewed interest in plasma physics experiments over the last 20 years.

One way to create a spheromak is to use a “plasma railgun”, a device which uses an external magnet to induce currents in the plasma as well accelerate it up to high speeds. In fact, speeds of 200 km/s (or about 124 miles per second) have been achieved with these spheromaks lasting some hundreds of microseconds. This is very impressive and certainly within the realms of use as a weapon.

Indeed, from the 1970s onward, the SHIVA Star programme (named after the multi-limbed Hindu god) at the Air Force Research Laboratory in Albuquerque, New Mexico, conducted various “arms” of research into this kind of plasma physics. One of these, known as MARAUDER (Magnetically Accelerated Ring to Achieve Ultrahigh Directed Energy and Radiation), was one of several U.S. government efforts to develop projectiles based on plasmas.

The weapon was able to produce doughnut-shaped rings of plasma and balls of lightning that exploded with devastating thermal and mechanical effects when hitting their target and produced a pulse of electromagnetic radiation that could scramble electronics. However, its status as of 1993 remains classified.

The temperatures achieved in such devices so far are up to a thousand times hotter than the surface of the sun. With enough plasma in each bolt these would cause huge amounts of damage, so the blaster as presented in the Star Wars films looks to be quite feasible indeed.

But how would these real life blaster weapons fare against the other iconic Star Wars weapon, the lightsaber? A blaster bolt is essentially equivalent to a lightsaber blade, just without the hilt. But as I’ve mentioned before, magnetic reconnection is unavoidable when two magnetically confined plasmas meet. This is the case when two lightsabers collide, causing explosive destruction of both the weapons and the people holding them. However, with a blaster you are far away from that explosion—leaving you totally unscathed.

So it turns out that Han Solo was right when he said “Hokey religions and ancient weapons are no match for a good blaster at your side.”

Martin Archer is a Space Plasma Physicist at the Queen Mary University of London. This article was originally featured on The Conversation.