A harmless virus was injected into a blind man's eye to help grow new light-sensing cells. 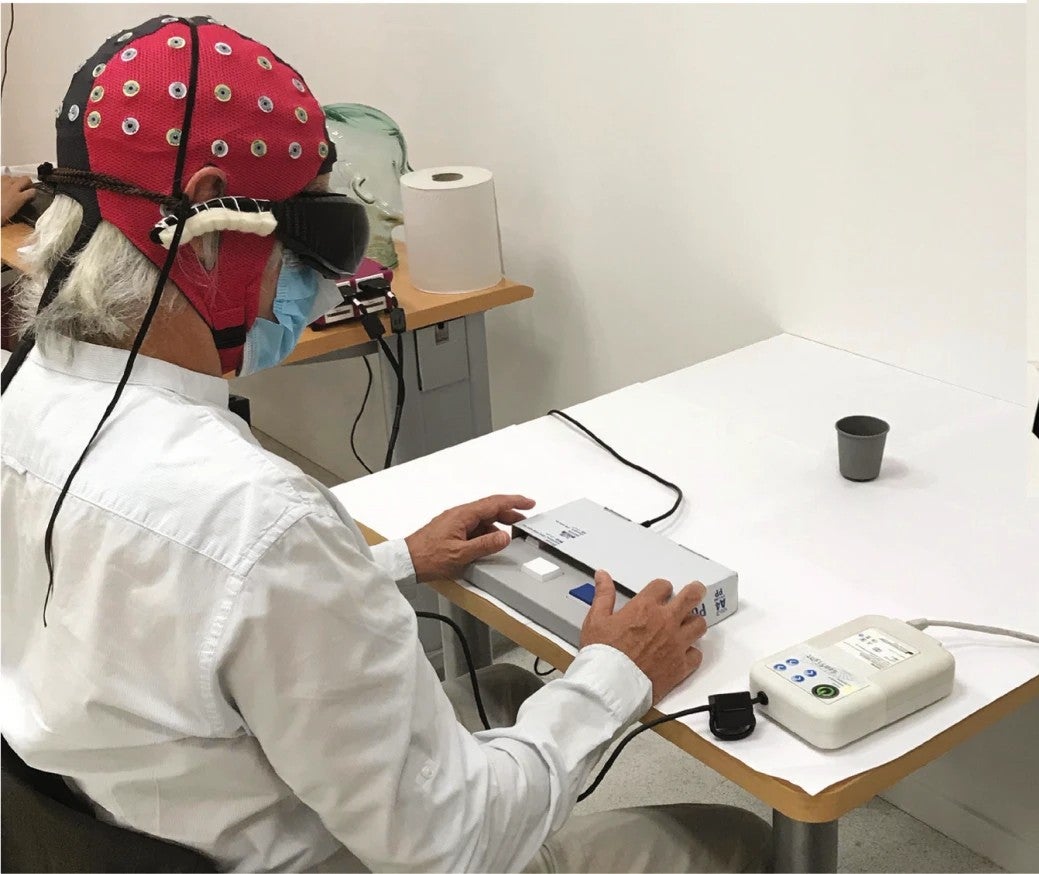 The patient had to assess the presence or absence of a cup on a white table through a two-key response pad. Sahel et. al., Nature Medicine
SHARE

For the first time after 40 years of blindness due to retinitis pigmentosa, a 58-year-old man in France was able to see and count objects presented on a table in front of him.

To achieve this first-ever feat, scientists injected a benign viral vector into one of the man’s eyes. It contained genes from green algae that produce a light-sensing protein, called ChrimsonR. That vector targeted ganglion cells in the retina, causing the man’s eye to produce its own ChrimsonR, which responded to light and told those retinal cells that they were seeing something.

But the man in the study did not regain full vision, and couldn’t see anything with the gene therapy alone. In order to achieve partial vision, scientists also gave the man a special pair of goggles that amplified light signals to the eye, allowing him to see shapes in front of him (though he couldn’t see color or fine detail). The study was published in Nature Medicine.

“Retinitis pigmentosa” is a term used for a group of genetic disorders that impact light-sensitive photoreceptor cells in the eye. It’s hereditary, progressive, and can be caused by mutations in any one of more than 50 genes. People with retinitis pigmentosa have damaged, abnormal, or absent photoreceptors—the rods and cones in the retina that allow us to see in low light and perceive colors, respectively. That’s why the scientists chose to target ganglion cells, which are usually not affected by these disorders. Ganglion cells typically sense motion, and are also responsible for sending visual signals from the retinal photoreceptors to the brain. By altering ganglion cells genetically, scientists can supplement those lost photoreceptor signals with ChrimsonR signals.

[Related: Colorblind? This app could help fill in the gaps.]

Though retinitis pigmentosa impacts approximately 2 million people worldwide, there is no cure or therapy for most forms of the disease.

This new paper is the first ever to document any sort of vision recovery in a neurodegenerative disease using gene therapy, and this man is the first recipient of the experimental treatment, which is already underway in additional volunteers.

Scientists say that this new way of seeing will take some time getting used to—study subjects need to train themselves and adjust. “What these ganglion cells are telling the brain is not the normal activity of the ganglion cells. What we are getting into is [teaching] the brain of a 60-year-old a new language,” study co-leader and cell biologist Botund Roska told The Guardian. “There’s a new scientific field [being] born here, namely visual rehabilitation.”

The next step is to conduct more trials in more study subjects to see whether this kind of optogenetic therapy could eventually be a standard treatment for different forms of blindness. The New York Times reported that the next steps for the team are to test higher doses of their vector and upgrade those special goggles.

While this study is exciting and promising, it’s hard to say how far these treatments can go in restoring sight, José-Alain Sahel, an ophthalmologist and co-leader of the study, told the New York Times. He says, “until you have a patient tell you what they are seeing, you really can’t predict anything.”