We’re finally studying how to combat the anti-vax movement, but the methods may surprise you

Researchers are beginning to understand how to talk to parents who are concerned about vaccines. 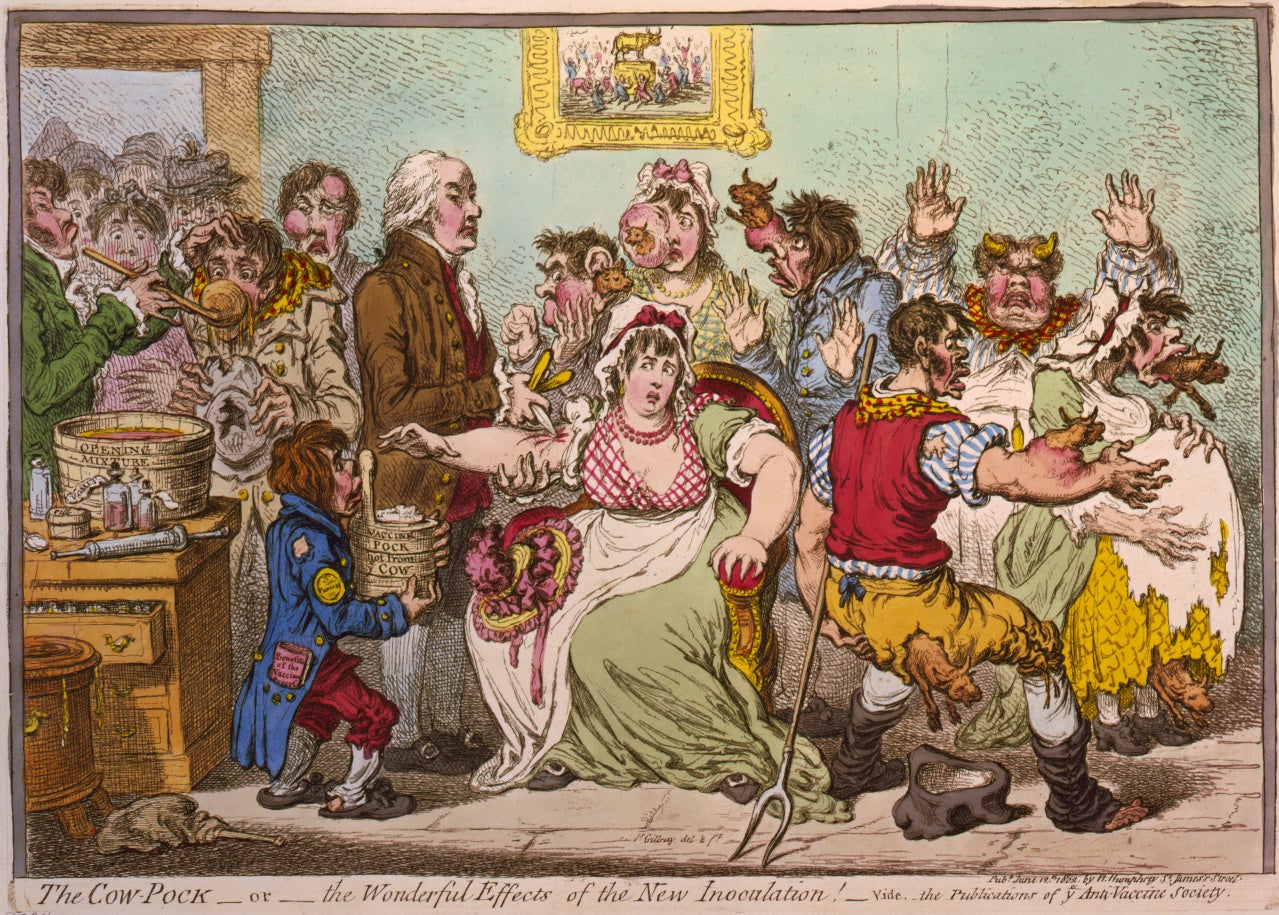 America in 2019 isn’t exactly a picture of cohesion, and the measles comeback is no exception. Amid multiple outbreaks across the country that are rapidly pushing us toward breaking a 25-year-old record, parents seem to have become deeply divided over the question of vaccination.

Despite anti-vax movements being nearly as old as the first vaccine, there hasn’t been much research at all on how to convince parents to vaccinate. Public health officials have learned some lessons from their own efforts to increase vaccination rates, but that’s not the same thing as truly understanding what works and what doesn’t.

“There’s a little bit of a Dunning-Kruger effect going on where knowing a little bit about it means we think we know a lot more than we do,” says Saad Omer, an epidemiologist and vaccinologist at Emory University who regularly serves on advisory boards for vaccine-preventable diseases. “People don’t feel entitled to talk about the microbiology of a virus without having enough experience, but anyone with an advanced degree feels entitled to talk about vaccine acceptance.” In other words, doctors and virologists shouldn’t talk about vaccination efforts as if they’re experts on how to persuade uncertain parents. What we need instead, he explains, is to demand the same rigor in studying the social science side of vaccine hesitancy as we do for every other area of science. Only by actually studying the issue will we figure out how to increase vaccination rates. “We’ll have to have evidence-based approaches to dealing with this,” Omer says. “This is not amateur hour.”

It’s only been in the last four or five years that researchers have truly begun to do so, Omer says, and even now there aren’t many people working in this area. Much of the early work has highlighted the importance of respecting parents’ views on vaccines, and several studies found that many efforts to convince folks to vaccinate end up backfiring—parents ultimately feel more strongly that they shouldn’t vaccinate than before.

So perhaps one of the most promising methods thus far might come as something of a surprise: approach the conversation with parents as if it’s assumed that they’re going to vaccinate their kids.

“I was having these conversations with parents and I heard about their concerns, and I realized that there wasn’t much I had in my communication toolkit to be able to draw upon,” says Doug Opel, a pediatrician at Seattle Children’s Hospital who’s lead much of this research. There really weren’t any evidence-based options to turn to, he explains, and what’s more, he realized he didn’t even have a great sense of how other pediatricians approached this conversation, much less how effective those other approaches might be. But he did know one thing. “The reason this is so important is because almost universally, studies that look at parents’ trusted source of information and most important influence, almost every study has shown that number one is their child’s pediatrician,” he says. “Despite all the other sources and clutter of misinformation that parents have access to, they still look to their child’s pediatrician. So what happens in that relationship, particularly about vaccines, is so important.”

Parents, he explains, are looking to their pediatricians for reassurance—so clinicians better know what to say and how to say it. Opel’s first step toward understanding the problem was simply to look at how pediatricians were already dealing with it. He and his colleagues got permission to tape more than 100 visits from 15 local Seattle pediatric offices and analyzed the conversations about vaccines.

They were expecting to find something of a mishmash of approaches. Instead, they found just two. Some doctors opened with a question about how the parents were feeling about vaccinating their kids. Others simply stated it, presuming that the parents would be choosing to vaccinate. When physicians asked a question, called the participatory format, around 83 percent expressed some hesitancy. When they used a presumptive approach, 74 percent accepted the decision right away. (A later study on flu vaccine acceptance found a similar result: 72 percent immediately accepted the presumptive recommendation versus 17 percent with the participatory method).

That surprised Opel and his colleagues, so they did some more digging. This was just an observational study—perhaps there was something different about these two groups of parents already. Maybe pediatricians were adjusting their approach based on what they already knew about these parents, especially if this visit was partway through a child’s vaccination schedule. And what if this presumptive approach weighed on parents in the long run, making them feel manipulated or as if they couldn’t voice their concerns?

A follow-up study removed those variables. The team enrolled parents just after the birth of their child and followed them through the two, four, and six-month visits to see how their pediatrician’s approach influenced the vaccination status of the child at eight months. They found exactly the opposite of what they expected: The more visits in which the doctor used the presumptive approach, the more likely a child was to be fully vaccinated. What’s more, parents reported that they were just as satisfied with those visits as those who received the participatory format.

Another scientist, health behavior researcher Noel Brewer at the University of North Carolina, took it a step further by doing a randomized controlled trial. Brewer focuses on HPV in adolescents, so his trial looked at whether training physicians to use either the presumptive or participatory approach influenced whether teenage boys and girls got the HPV vaccine. His findings were another step in confirming that the presumptive method really does seem to work. Though it was only by five percentage points, a one-hour training session about the presumptive approach for physicians did increase vaccination rates.

Still, not every parent was convinced by the presumptive method. Even in Opel’s first, most promising study, just under 20 percent expressed some hesitation. What should we do with those parents?

Opel’s collaborators at the University of Colorado Denver are now taking on a study to do just that. They’re operating it as a randomized controlled trial in which physicians are trained to use the presumptive method right off the bat. Most parents should respond well to that, but for those who still have concerns, there’s another step: motivational interviewing.

The first step is simply to ask parents what their concerns are. Physicians are then counseled to validate those concerns; they should tell parents that this is a hard decision, that it is confusing to hear so much conflicting information, and that yes, unfortunately, vaccines aren’t 100 percent safe. Only then should pediatricians say that their expert opinion—having looked at all the available data—is that vaccinating is unequivocally the right choice.

“There is this tendency to dismiss these parents who have concerns as not being knowledgeable or being exposed to some really bad information on the internet,” says Jason Glanz, a senior research investigator with Kaiser Permanente’s Institute for Health Research in Colorado. “That’s partly true, but really they’re concerned for their children. I think it’s a small proportion who are adamantly against vaccination.”

His research on vaccine-hesitant parents uses online tools where participants can engage with information about shots with their health care providers, rather than just receiving a pamphlet or looking up info online. He’s found that it’s crucial to acknowledge a parent’s fears and to not dismiss their concerns about potential vaccine risks. Instead, physicians have to be honest with their patients—there are risks, they’re just exceedingly small and are far outweighed by the benefits of vaccination (and some, like the purported connection between vaccines and autism, don’t exist at all). It’s also important to start those conversations early during pregnancy, since his studies have found that parents start forming their opinions on vaccines before their child is even born.

Glanz’s methods might be harder to scale up to a population level, but they still offer an important glimpse into how we can best approach the vaccination problem.

But still, all of this work is likely to only be one part of a much larger puzzle. “I think there’s not gonna be one solution to this,” Glanz says. A multi-pronged approach involving national public health messaging, physician communication strategies, and better online resources is probably how we’re going to accomplish a goal that all of us, even vaccine-hesitant parents, share: fewer measles cases.

“It took a while, but the smoking campaign worked,” says Glanz. “That used multiple modes and it took many, many years, but it worked. We might be dealing with something similar here.”