The places in the world that still appreciate vaccines

Many developed nations have the luxury of being skeptical about vaccines 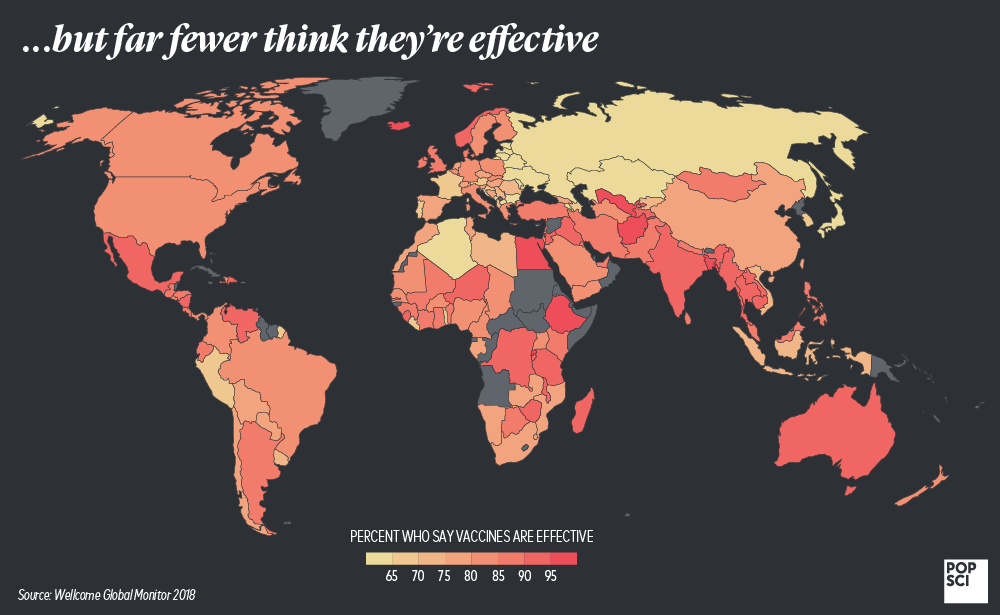 It’s an unfortunate truth of this world that the people most benefiting from a system are the least likely to acknowledge how great it is—vaccines are just one example.

Vaccine-preventable diseases suffer from the very fact that they’re preventable. “Largely in the developed world and in the developing world, some of the vaccine-preventable diseases aren’t as visible, so people don’t seek the vaccine,” explains Katrina Kretsinger, an immunization expert at the World Health Organization. “But there are some places where that fear still exists.” Many places where measles, polio, and the like are still widespread—and still major childhood killers—people recognize how important a vaccine is to preventing deaths.

Which is part of why the areas of the world with the least confidence in vaccine efficacy and safety aren’t necessarily in the developing world. In fact, it’s often the opposite. Many of the countries with the highest proportion of vaccine skeptics are developed nations, perhaps precisely because they have the luxury to be skeptical in the first place.

Now, there are many reasons why people worldwide might not think that vaccines are safe or effective. If your government is full of corruption, or there’s little faith in the healthcare system, you may not have the trust in those types of organizations to believe them when they say vaccines are in your best interest.

But it’s also true that it’s easy to be skeptical of a measles or polio vaccine when you aren’t exposed to the annual childhood deaths that both diseases wrought on the world’s population only a few decades ago (and to some extent, still do). “As you decrease incidence of disease, you have increasing cohorts of parents who don’t hear about the disease as much as they hear about vaccine adverse events, real or perceived, and when that happens you have a drop in confidence in certain populations,” says Saad Omer a vaccinologist at Emory University. He explains that yes, there are many other factors that influence vaccine skepticism, but that it’s also majorly driven by a lack of experience with these diseases. Vaccines are victims of their own success.

A recent report from the Wellcome Trust nicely highlights this phenomenon. Their analysts performed a survey to ask people about their faith in medicine, doctors, and vaccines in particular. Here are a few highlights of what they found:

These maps give us a sense of which parts of the world still place a high value on vaccines. The general pattern shows that much of Africa, Central and South America, and Asia—areas which had more recent trouble with vaccine-preventable diseases—tend to think vaccines are important, safe, and effective. Most of the areas in lighter colors, where that faith is falling, are places that have gone decades without having to feel the fear of childhood-ravaging illnesses. You can see this even more clearly if we lay it out on a graph:

Though there are certainly exceptions (the Democratic Republic of the Congo being the most obvious), it’s mostly reddish-orange, European dots clustering at the bottom. Luckily, much of the rest of the world clusters at the top, indicating that they both think it’s important to vaccine kids and think that vaccines are effective. This is something of an inherent problem with eliminating a disease—it’s easy to become complacent. But we’re going to have to fight that complacency if we want to keep making progress.