CRISPR could use gold nanoparticles to edit your brain

Researchers were able to turn down behavioral problems in mice. 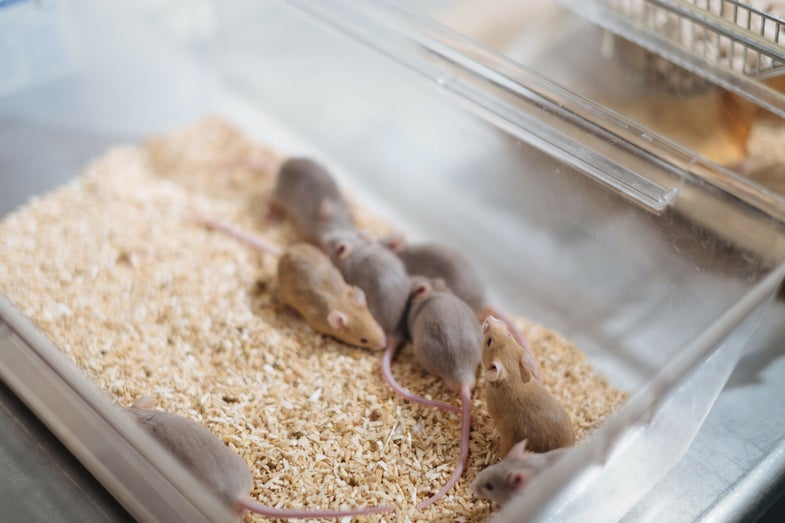 Add this to the list of possible applications for the seemingly-magical gene editing technology CRISPR: helping people with neurological disorders edit their brains with pinpoint accuracy to alleviate the symptoms of their disorder.

That’s the potential promise of a new study, out today in the journal Nature Biomedical Engineering. In the study, a team of researchers from the University of Texas and the University of California at Berkeley as well as a Berkeley-based company called GenEdit describe a new process for using gold nanoparticles for the delivery of the Cas9 enzyme that does the editing. They say this technique, first described in a 2017 paper dealing with gene editing in muscle cells, could pose fewer problems than the viruses that serve as CRISPR’s conventional delivery method. And the new paper offers an almost-unheard of application for CRISPR: editing inside the adult brain.

“This paper is the first demonstration that you can do non-viral gene editing in the brain and have local effects,” says Niren Murthy, a Berkeley bioengineer who has been working on new CRISPR delivery vehicles for several years. This kind of localized editing could potentially help treat patients with conditions such as Huntington’s Disease, epilepsy, chronic pain, or even addiction.

They injected specific parts of each mouse’s brain with gold nanoparticles treated to carry the Cas9 molecules. The CRISPR-Gold carried the Cas9 to a receptor called metabotropic glutamate receptor 5. Although this is a common receptor, in the part of the brain that the researchers injected it’s related to repetitive behaviors. There in the striatum, the Cas9 shut down the gene that produces the receptor. The amount of repetitive digging and leaping the mice were doing went down—in the case of the leaping, by 70 percent.

Using cell staining tests, the researchers were also able to demonstrate that they could edit multiple kinds of cells in the brain using CRISPR-Gold, which opens the door to further applications.

“Using viruses has limitations,” explains Hye Young Lee, the paper’s first author, “because a virus can express unwanted proteins.” Her lab at the University of Texas San Antonio focuses on studying how ASD manifests in the brain and how it could be treated. She began collaborating with the UC Berkeley CRISPR team two years ago, and saw how CRISPR-Gold could potentially be used to deliver genetic modifications to the brain without the unwanted side-effects of using CRISPR.

The virus DNA in the brain can have side effects, because it doesn’t go away once the CRISPR operation is done. Using the gold nanoparticles removes the issue of foreign DNA that’s producing damaging proteins, one of the central issues of CRISPR. Still, leaving bits of gold in the brain isn’t good either, says Murthy: the team is now looking at ways to deliver the Cas9 using just the polymers that they currently use to get it to stick to the gold, but without the metal itself.

Like most things to do with CRISPR, the idea of editing the brains of people with neurological disorders naturally raises a number of ethical questions, including whether we should even suggest that the brains of people on the autism spectrum need fixing. “I want to emphasize that this is not the solution,” says Lee. She says it might be possible, using this technology, to allow autistic people to treat unwanted symptoms such as repetitive behaviors just like they might with medicine—with the difference that CRISPR changes would likely be permanent.