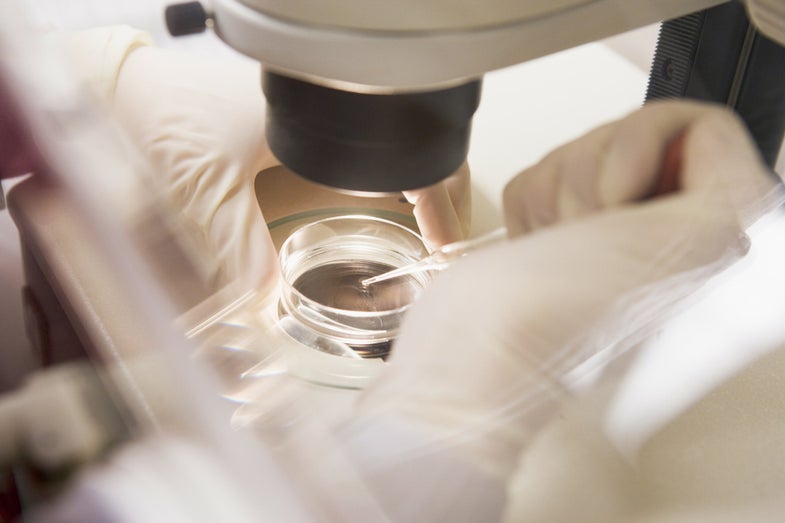 In the past 24 hours, a story of potentially world-changing import has surfaced. First reported by the MIT Technology Review and then not long after by the Associated Press, who seem to have been sitting on the story for a while, the news that a Chinese scientist named He Jiankui led an unprecedented experiment to edit human embryos and see them carried to term rocked the genetics community. Here’s what you need to know about this evolving story.

Besides He, the most important players in this story may be twin baby girls named Nana and Lulu. As far as we know the twins were edited as embryos using CRISPR-cas9, a gene editing tool. The stated purpose of the edit was to disable CCR5, a gene involved in allowing HIV to invade cells, which is how a virus infects a host.

The twins don’t appear in a promotional video uploaded to Youtube by The He Lab, but the scientist himself does. “When Lulu and Nana were just a single cell, this surgery removed the doorway through which HIV enters to infect people,” he says.

In the video, He says his team performed a whole gene sequencing to ascertain if the procedure was successful. “The results indicated the surgery worked safely, as intended,” he says—but that’s not true, according to a scientist who has seen a preliminary version of He’s results and research documentation.

“It’s abominable,” says Kiran Musunuru, a researcher at the University of Pennsylvania. Musunuru says he’s seen a preliminary version of the paper prepared by He’s team. Musunuru says that the paper he saw shows two major issues with the edited embryos: mosaicism and off-target mutations.

There’s a reason the international genetics community has ethics policies in place that preclude this kind of research being done in secret. In the United States, it’s illegal to even attempt the sort of gene editing He used on a human embryo.

“I don’t want to convey that I’m categorically against [gene editing on embryos] ever being done,” says Musunuru. But in this case—in secrecy and without oversight—he says it’s totally unacceptable. Perhaps the biggest problem, to him, is the fact that the two embryos showed evidence of mosaicism and off-target mutations. Mosaicism is when some of the cells in an organism have a mutation, like the one that He was trying to make, but others do not. Off-target mutations are exactly what they sound like: genetic changes that weren’t the ones intended by the gene edit, potentially introducing congenital diseases or other unforeseen consequences.

If circumstances were different and Musunuru saw embryos in his own lab that had the composition of the ones He’s team reported on, would they be allowed to come to term? “Absolutely not,” says Musunuru. There is too great a possibility that those unintentional genetic tweaks will cause totally unforeseen health problems in the infants, or even in their future progeny. When he saw the promotional video, “I was alternately screaming and crying,” says Musunuru.

“When this news first broke, I was appalled, but I was not totally surprised,” says Cornell University postdoctoral researcher Yangyang Cheng. Besides her work as a particle physicist, Cheng—who grew up in China and studied there until she was a graduate student—has become a voice on the culture of scientific research in China.

Although some people on Twitter have speculated that the whole thing was faked, Cheng says she has no reason to doubt that the experiment occurred and the children are real. Earlier this year, she wrote for Foreign Policy that in China, “standards for research on the latest technological frontiers are being set by a government that has always prioritized power over ethics.” That means that the climate for biomedical research downplays the role of ethics and lacks the mechanisms to enforce ethical norms, she wrote, as well as being shaped by “rampant corruption.”

“I’m not a science ethicist but I have major concerns about gene-edited babies,” tweeted Leta Hong Fincher, author of 2018’s Betraying Big Brother: The Feminist Awakening in China. She pointed to “China’s history of using eugenics in population planning.”

Advances—however questionable—in gene editing might be seen on some level as a way to help the totalitarian Chinese government shape and control its population, but it’s also seen as a way to enhance China’s reputation. “There is a sense of science as a tool of national greatness,” says Cheng. This move “is very much a product of Chinese politics,” she says—though there’s no evidence that the government or even any research institutions necessarily knew about what was happening before He’s announcement. Musunuru says he finds it hard to believe that absolutely no-one knew, but that’s a question that the public will likely never have the answer to.

He and his collaborators “basically went rogue,” says Musunuru. He’s institution denies knowledge of his research and has suspended him without pay, but reactions at the national level have been a bit more ambivalent, Musunuru says. Stat now reports that a year ago the Chinese Academy of Science unexpectedly and quietly pulled out of sponsoring a major conference on human genome editing which was to be held in mainland China. This move, which was not reported on at the time, may have been related to the country’s controversial relationship with bioethics.

Hong Kong stepped in to host the conference after this move, Stat reports. It will begin this Tuesday, November 27, in just a few hours local time, and in a completely different world—one that’s gone from discussing potential futures to “okay, now it’s happened,” says Musunuru. “This is the sort of situation where there should have been transparency from the start,” he says. In the absence of that transparency, he says, it shouldn’t have been attempted at all.

He was set to appear at the conference, where, Musunuru suspects, the Chinese scientist was planning to unveil his unethical experiment to the world. Now that the cat’s out of the bag, he’s under investigation as reported by the Tech Review earlier today.

Whatever happens to him and his collaborators, their field will have to reckon with what they did long after the conference comes to a close. He and his team seem to have violated international ethics understandings and research norms in a way that unprecedentedly alters humanity itself. Among those norms is something that’s not being discussed a lot yet, but will likely be dissected in the coming days: the standard of informed consent. A big concern for both Cheng and Musunuru is the question of whether informed consent—something He’s laboratory maintains it got from the parents of the two girls before altering their embryos—is even possible at this stage in scientists’ understanding of gene editing and in the climate of research in China.

Nobody knows yet what will happen to Nana and Lulu, who He says are only a few weeks old. Whatever their lives hold, they didn’t make this decision for themselves, and the international community should wish them only the best.

“Let’s call it what it is,” Musunuru says: “experimenting on humans.”

Correction: A previous version of this article mistakenly identified Kiran Musunuru’s institution as Penn State University; he is affiliated with the University of Pennsylvania. We regret this error.