My, what big windows you have 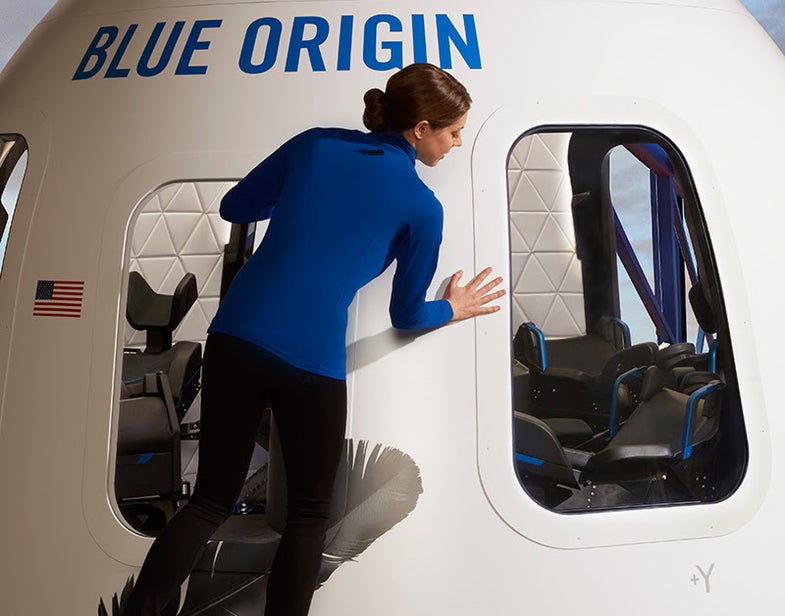 It's not clear why this woman is creeping around outside the crew capsule. Spacewalks are not included in Blue Origin's trips. Blue Origin
SHARE

Blue Origin, the private company hoping to carry tourists into space in 2018, has unveiled the interior design for its spacecraft’s cabin.

The New Shepard’s layout isn’t exactly mind-blowing—there’s only so much variation that can be crammed into a small, gumdrop-shaped crew capsule. Although the overall shape and size are similar to other astronaut capsules (due to the physical constraints of human spaceflight), the New Shepard spacecraft does have a few notable features.

“Every seat’s a window seat,” Blue Origin founder Jeff Bezos wrote in an email this morning.

Windows are typically a weak spot on a spacecraft’s hull, so SpaceX’s Crew Dragon capsule, intended for use by NASA astronauts, contains just a few small windows. But Blue Origin’s main selling point for space tourists is the view from space, so its design includes six large windows—”The largest windows ever in space,” Bezos notes. The company no doubt spent a lot of money ensuring their strength and safety.

An escape motor, located at the center of the capsule, would jettison the capsule away from the rocket booster if something went wrong during launch.

Each of the six visitors to sub-orbital space will also have their own screen for tracking the flight progress (and perhaps, one day, watching B-movies and re-runs of Everybody Loves Raymond).

If you’re itching to get your butt onto one of those cushy reclining chairs, good luck to you. Blue Origin hasn’t released its pricing info, but estimates hover around $250,000 per ticket. Gotta pay for those big windows somehow.