With strength in numbers, the smallest galaxies may have completely transformed the early cosmos. 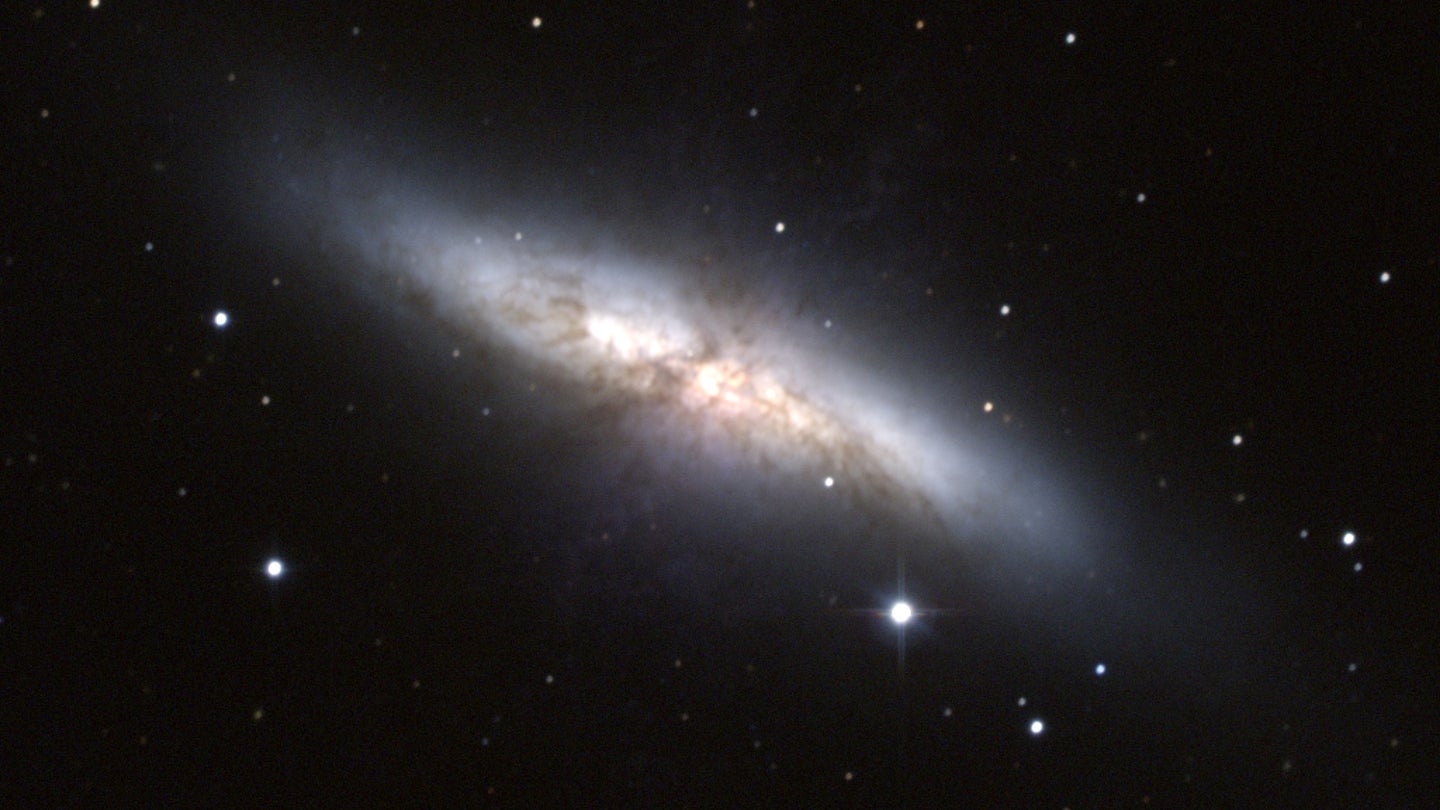 Pox 186 features a burst of star formation at its center, which may have expelled all of its hydrogen gas. N.A. Sharp/AURA/NOAO/NSF
SHARE

Forty-two million light years away from Earth in the constellation Virgo sits Pox 186. It’s a simple galaxy with few embellishments, little more than a cluster of stars and a tail of gas streaming behind it. It’s also tiny, weighing a hundred thousand times less than our own Milky Way pinwheel.

But Pox 186’s modest size is the key to an extraordinary property. It has essentially blown itself apart, a recent astronomical survey suggests, shedding a molecular shroud that cloaks most galaxies and letting almost all its light stream into its surroundings. If Pox 186’s explosive, “blow-away” behavior is normal for a galaxy of its type, it could help cosmologists understand a cosmic transformation that ended the so-called “dark ages” some 13 billion years ago.

“It’s the first time we’ve ever observed something like this,” says Nathan Eggen, a onetime astronomer who recently graduated from the University of Minnesota and lead author of the study. “At the very least, it’s proving that a ‘blow away’ is possible.”

For hundreds of thousands of years after the Big Bang, the universe looked nothing like it does today. It was dark. Few stars and galaxies existed to light up the void. And the substance filling the universe was completely different.

We think of the space between galaxies as empty, and it mostly is, except for a thin smattering of electrons and protons. These particles collectively form what astronomers call an ionized (meaning electrically charged) gas, or a plasma, that permeates the whole cosmos.

But this plasma has not been around forever. It was once a neutral gas of hydrogen atoms, and as the early stars ignited, their more energetic rays of light blasted the hydrogen atoms apart into pieces, creating the protons and electrons that litter intergalactic space today. Astronomers call this event the “epoch of reionization,” because it restored the universe to an ionized state it existed in even earlier, after the Big Bang.

[Related: The universe is 13.8 billion years old—here’s how we know]

The question is, which stars burned through the cosmic hydrogen fog? Did a few gargantuan galaxies punch through the mist? Or did countless mini constellations work together to reionize the entire universe? Astronomers can’t look for the ancient agents of reionization directly, because the hydrogen gas blocks the high-energy light that could clear it from reaching us. Instead, some researchers seek nearby galaxies that might act similarly to their distant forerunners.

“They can be used as local laboratories to study the galaxies far away,” says Claudia Scarlata, a professor of astronomy at the Minnesota Institute for Astrophysics who collaborated with Eggen.

A galaxy with no hydrogen

Pox 186 is one such galaxy. Discovered in the 1980s, astronomers have spent decades debating how it formed. As part of the investigation, researchers looked for the galaxy’s neutral hydrogen, which makes up the bulk of most galaxies by mass. Pox 186 appeared to have none.

“The more we look at it, the more interesting it gets,” Eggen says.

That’s when he, Scarlata, and their colleagues got involved. They secured observing time on the Gemini South telescope in Chile and aimed it at Pox 186 for about an hour and a half over the course of two nights in 2018. The plan was to observe two types of oxygen gas (which can be used to probe the density of hydrogen) and use them to work out where the hydrogen was.

One type of oxygen turned out to be weaker than expected, but the other shone through with a signal the astronomers describe as “booming.” This brightly beaming oxygen had not just one color but a range of wavelengths, suggesting its light was being distorted by movement. At least a portion of the oxygen gas appeared to be on a tear.

“It’s moving nearly [ten times] faster than it would have to escape the galaxy,” Eggen says. Some of the gas is “almost certainly going to leave the galaxy completely.”

Eggen and Scarlata emphasize that they can’t be certain as to what’s going on in Pox 186. Gas flows are chaotic mixtures of many different types of atoms interacting at wildly different temperatures, and they’re just looking at one variety of oxygen.

But if the streaming oxygen isn’t misleading them, it hints at the fate of Pox 186’s missing hydrogen. A violent outflow stemming from intense star formation (which later leads to intense star death in the form of explosive — and expulsive — supernovae) got rid of it all.

“It was kind of surprising to see that the small galaxies could basically blow themselves apart,” Scarlata says.

The researchers published their new portrait of Pox 186 last week in The Astrophysical Journal.

The tiny workhorses of reionization

Pox 186’s hydrogen blow-out strengthens one theory of how the universe as a whole melted away its hydrogen gas. Big galaxies pour light into space, but their gravitational pull also holds nearby hydrogen close, so their most energetic rays of light don’t get far enough to break apart the hydrogen between galaxies.

But pepper the early cosmos with baby galaxies like Pox 186, and everything might work out. Their strong outflows clear out their own hydrogen (overcoming their feeble gravitational attraction), and essentially all of their energetic light escapes into space and busts up the hydrogen there.

Next, Scarlata is looking forward to the fall launch of the James Webb Space Telescope, which aims to tally up the early universe’s galaxies. This census will check whether Pox 186 analogs existed in sufficient numbers to expel the energy needed to reionize the universe. They haven’t shown up in surveys to date, in part because the dim mini-galaxies are the hardest to see.

But if they turn up, the behavior of Pox 186 suggests that the plucky galaxies may have changed the entire universe. “A mountain has to grow an inch at a time,” Eggens says.