Hubble Glimpses the Most Distant Object Ever Seen, A Galaxy 13 Billion Light Years Away

Peering deep into the cosmos with its upgraded infrared camera last year, the Hubble Space Telescope was able to image... 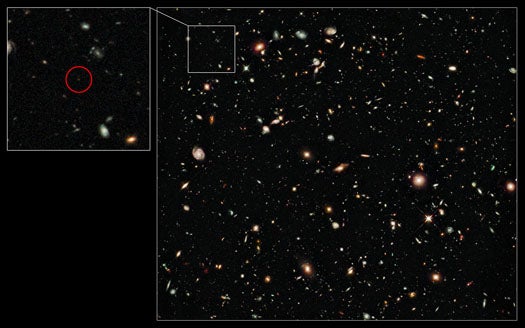 Peering deep into the cosmos with its upgraded infrared camera last year, the Hubble Space Telescope was able to image a very deep region of the universe. Researchers didn’t realize it at the time, but after follow-up measurements by the ESO’s ground-based Very Large Telescope, a team of astronomers have determined that they’ve glimpsed the most distant object ever seen, some 13 billion light years away.

On its face the discovery is amazing enough (13 billion light years is a long, long way), but long-distance records aside it’s also extremely interesting from a scientific standpoint. Because it’s so far away, the universe appears to us as it did when the universe was just 600 million years old (the universe is believed to be anywhere from 4,000 to about 13.6 billion years old, depending on who you ask).

At that point in cosmic history, the universe was not as transparent as it is now. Rather, it was filled with a hydrogen fog that absorbed ultraviolet light from birthing galaxies, creating an opaque fog. This period when the UV light was still clearing that fog is known as the era of reionisation, and it is one reason why it’s very hard to see back that far in history. Galaxy UDFy-38135539 is the first confirmed observation of a young galaxy clearing the fog and reaching one of our scientific instruments at a detectable level.

Hubble identified several candidate objects that appeared to be shining through from the era of reionisation with its Wide Field Camera 3 last year, but measuring distances across so much space has to be conducted by a powerful ground based telescope. It took two months of careful observation and analysis, but astronomers at the VLT have now confirmed that the object is the most distant object ever detected.

Like most good scientific discoveries, this one begets more questions and more science. For one, the galaxy itself doesn’t appear to be large enough on its own to produce the kind of light that could pierce the hydrogen fog, so there must be other nearby galaxies helping it clear the way. It sounds like just the job for the ESO’s Extremely Large Telescope, set to come online at the end of the decade. 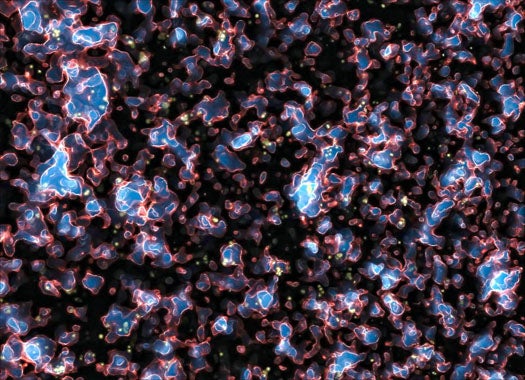 A Glimpse of the Past

The galaxy is so far away that it appears as it did when the universe was just 600 million years old. At that time, the universe was filled with a dense hydrogen fog that was lit up by intense light from young galaxies. This illustration adapted from a scientific simulation depicts what the universe looked like at that time, a period known as the era of reionisation.
Deep Space
Space
Space Telescope