How a Team of Enthusiasts Are Mapping Dark Matter 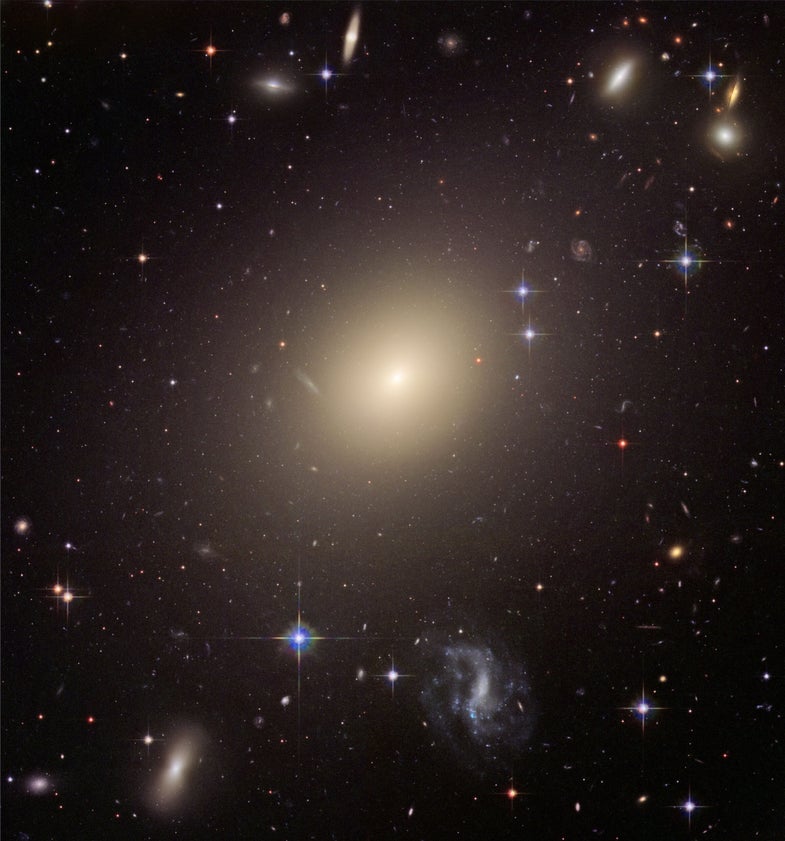 When the Euclid mission lifts off at the end of this decade, it will map galaxy clusters in infrared and visible light, helping to blueprint the large-scale structure of the universe. And a bunch of amateur science geeks who signed up for the competition will use their specialized skills to elucidate those findings.

The Mapping Dark Matter competition proves that Arabic handwriting analysis, glaciology and particle physics are more relevant to cosmology than anyone would have thought — and that when you ask people to solve problems for bragging rights, you get some very creative results.

NASA’s Jet Propulsion Laboratory sponsored the competition in cooperation with Kaggle, a startup that hosts prediction and data modeling competitions. In all, 73 teams signed up to measure the ellipticity of galaxies in astronomy images, a key element in studying cosmology’s dark materials. Physics professor David Kirkby and graduate student Daniel Margala from the University of California-Irvine won the prize and brought their findings to JPL last week.

The problem: estimating the shapes of simulated postage-stamp-sized galaxy images that had been deliberately blurred. Kirkby’s background is in particle physics, but he’s interested in cosmology, so he was intrigued when he saw the competition online.

“It’s hard to get into a new area of research, because so much has already gone on before, and there’s so much jargon, it’s hard to work with the data,” Kirkby said in an interview. “But because this was a competition, it was a really well-designed problem. It posed the question in a way that was really easy for us to understand and jump in — they wanted to bring in unique ideas to work on the problem.”

And it worked. Right off the bat, Martin O’Leary, a Ph.D student in glaciology from Cambridge University, spends most of his time studying satellite images to detect the edges of glaciers; his techniques also applied to determining galactic edges. Then teammates Eu Jin Lok, an Australian graduate student at Deloitte, and Ali Hassaine, a signature verification specialist from Qatar University, built on O’Leary’s findings. Kirkby and Margala built an artificial neural network and were able to come up with the most accurate values for the galaxies’ ellipticity.

Jason Rhodes, an astrophysicist at JPL and an investigator on the Euclid mission, said the results will likely be incorporated into future algorithms that will measure real data.

“We’ll have the best quality of data from Euclid, and we need these techniques to fully exploit that data,” he said. 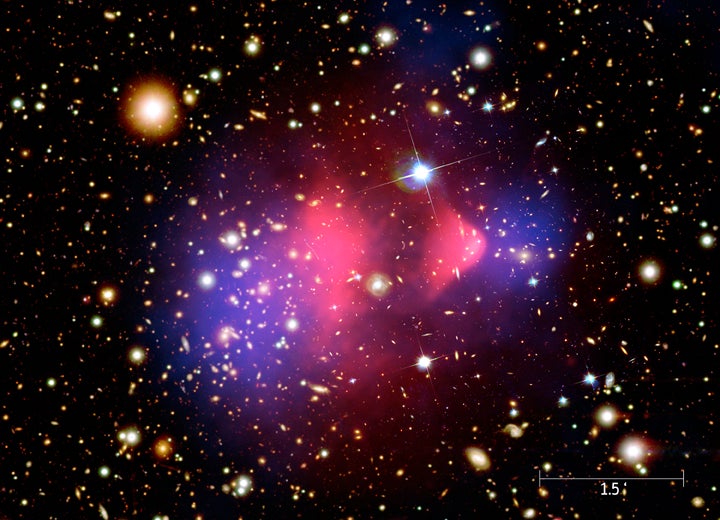 The image above, of the Bullet Cluster, is probably the best example of this. It depicts two colliding clusters of galaxies that have passed through one another at unspeakably energetic speeds. As they moved past each other in opposite directions, the stars slowed down a little, and the hot gas, which is the pinkish areas, slowed down a lot. But the dark matter, which doesn’t interact with anything except gravitationally, didn’t slow down. It is represented in blue here, way ahead of the rest of the material in these clusters. It’s not directly visible in this image; the blue shading is inferred from the effect that its gravity has on background radiation. The gravity of dark matter acts like a lens, warping the passing light.

Think of a penny in a pool of water — the penny you see is distorted because the light reflecting off it has to travel through water, Rhodes explained.

“In the same way, a very distant galaxy has a shape that we see as distorted, as it is moving through the intervening dark matter,” he said.

To know how much the light has been distorted, you’d need to know the shape of the object emitting it — a galaxy that looks warped might just be a particularly ovoid galaxy. Determining galactic ellipticity helps astronomers determine how much of that ellipticity is the result of dark matter.

Kirkby and Margala came up with a model for each galaxy, involving six or seven different parameters. This global view, rather than looking at each data point on its own, was a novel approach, according to Rhodes. Then they fed the data into an artificial neural network, which they used to find the galaxies’ elliptical shapes. Kirkby said he planned to write a paper about his work.

“The astronomy community is trying to get out in front of the large data analysis problem that’s looming,” Kirkby said. “The fact that it was set up as a competition was kind of unusual for research, but I think that made it fun … It adds a new element to research that we haven’t seen before, where people tend to work by themselves and publish papers.”