Galaxy-building theory says there are stars and there are stage hands. The bright, shining galaxies filled with stars, the theory... 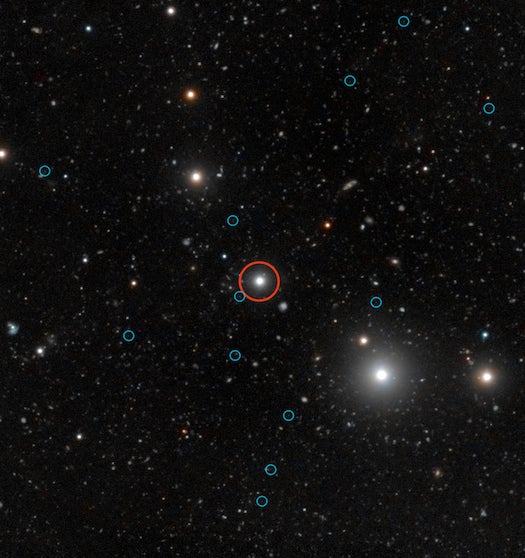 This deep image shows the region of the sky around the quasar HE0109-3518. The quasar is labelled with a red circle near the centre of the image. The energetic radiation of the quasar makes dark galaxies glow, helping astronomers to understand the obscure early stages of galaxy formation. The faint images of the glow from 12 dark galaxies are labelled with blue circles. Dark galaxies are essentially devoid of stars, therefore they don’t emit any light that telescopes can catch. This makes them virtually impossible to observe unless they are illuminated by an external light source like a background quasar.This image combines observations from the Very Large Telescope, tuned to detect the fluorescent emissions produced by the quasar illuminating the dark galaxies, with colour data from the Digitized Sky Survey 2.
SHARE

Galaxy-building theory says there are stars and there are stage hands. The bright, shining galaxies filled with stars, the theory goes, took star-building gas from somewhere else, but we couldn’t find exactly where the help came from. Now astronomers have likely found that source; starless “dark galaxies” that fed others early in the history of the universe have been seen.

The European Southern Observatory’s Very Large Telescope was able to catch a glimpse of the galaxies for the first time as they were being illuminated by a quasar. Since the galaxies are bad at forming stars on their own, they’re difficult to see without a light source like a quasar, which shines UV light and can cause a fluorescent glow in the starless galaxies. Their existence has been hinted at before, but this marks the first direct look.

Some estimations were also offered by researchers on the properties of these galaxies. The mass of their gas is about 1 billion times that of the Sun’s, and they’re about 100 times less conducive to star-forming than similar neighbors.