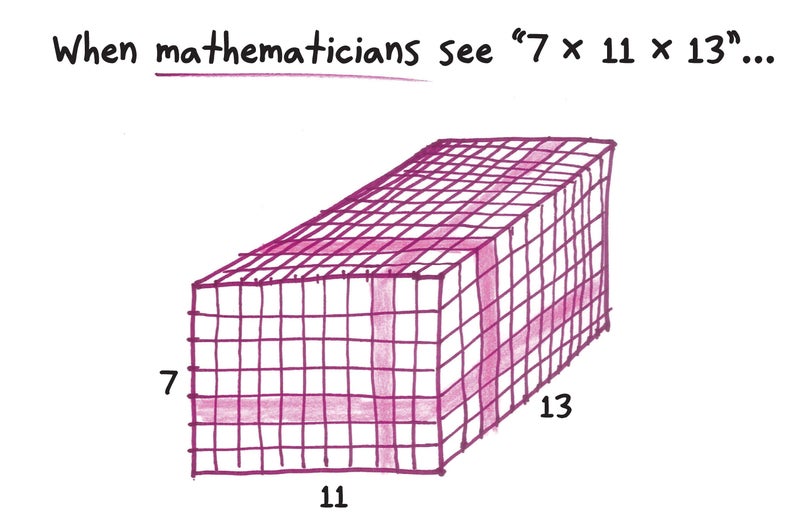 A funny language, I’ll admit. It’s dense, terse, and painstaking to read. While I zip through five chapters of a Twilight novel, you might not even turn the page in your math textbook. This language is well suited to telling certain stories (e.g., the relations between curves and equations), and ill-suited to others (e.g., the relations between girls and vampires). As such, it’s got a peculiar lexicon, full of words that no other tongue includes. For example, even if I could translate a0 + ∑ ∞ n=1 (an cos(nπx/L) + bn sin(nπx/L) into plain English, it wouldn’t make sense to someone unfamiliar with Fourier analysis, any more than Twilight would make sense to someone unfamiliar with teenage hormones.

But math is an ordinary language in at least one way. To achieve comprehension, mathematicians employ strategies familiar to most readers. They form mental images. They paraphrase in their heads. They skim past distracting technicalities. They draw connections between what they’re reading and what they already know. And—strange as it may seem—they engage their emotions, finding pleasure, humor, and squeamish discomfort in their reading material.

Now, this brief chapter can’t teach fluent math any more than it could teach fluent Russian. And just as literary scholars might debate a couplet by Gerard Manley Hopkins or the ambiguous phrasing of an email, so mathematicians will disagree on specifics. Each brings a unique perspective, shaped by a lifetime of experience and associations.

That said, I hope to offer a few nonliteral translations, a few glimpses into the strategies by which a mathematician might read some actual mathematics. Consider it Squiggle Theory 101.

A common question I get from students: “Does it matter whether I multiply by 11 or 13 first?” The answer (“no”) is less interesting than what the question reveals: that in my students’ eyes, multiplication is an action, a thing you do. So one of the hardest lessons I teach them is this: Sometimes, don’t.

Multiplication: now that’s where the party’s at. And to join the festivities, you need to deploy our first math-reading strategy: forming mental images.

As the picture on the previous page shows, multiplication is all about grids and arrays. 1001 can be seen as a giant structure of blocks, 7 by 11 by 13. But that’s just getting started.

You can visualize this as 13 layers of 77 each. Or, if you tilt your head sideways, it’s 11 layers of 91 each. Or, tilting your head a different sideways, seven layers of 143 each. All of these ways to decompose 1001 are immediately evident from the prime factorization . . . but virtually impossible to discern from the name 1001 without laborious guesswork.

To casual fans, π is a mystic rune, a symbol of mathematical sorcery. They ponder its irrationality, memorize thousands of its digits, and commemorate Pi Day on March 14 by combining the most glorious of mankind’s arts (dessert pies) with the least glorious (puns). To the general public, π is an object of obsession, awe, even something approaching worship.

And to mathematicians, it’s roughly 3.

That infinite spool of decimal places that so captivates laypeople? Well, mathematicians aren’t that bothered. They know math is about more than precision; it’s about quick estimates and smart approximations. When building intuition, it helps to streamline and simplify. Intelligent imprecision is our next crucial math-reading strategy.

Take the formula A = πr2, which many students have heard so often the mere phrase “area of a circle” triggers them to scream, “Pi r squared!” like sleeper agents programmed by brainwashing. What does it mean? Why is it true?

r is the radius of our circle. It’s a length.

r2, then, is the area of a little square, like the one pictured.

And that’s exactly what our formula says: Area = a little more than 3 × r².

If you want to verify the precise value—why 3.14-ish and not 3.19-ish?—then you can use a proof. (There are several lovely demonstrations; my favorite involves peeling the circle like an onion and stacking the layers to make a triangle.) But mathematicians, whatever they insist, don’t always prove everything from first principles. Like everyone from carpenters to zookeepers, they’re happy to employ a tool without knowing precisely how it was constructed, so long as they have a sense of why it works.