When it's finished, it'll be the largest in the world, and up to 10x sharper than Hubble 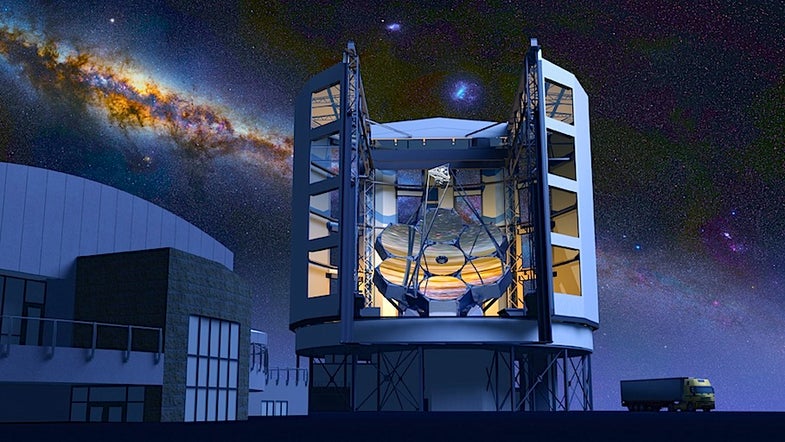 You can get a great view of the stars in the Atacama Desert in Chile. There’s seldom a rain cloud in the sky (it’s one of the driest places on Earth), and it’s far from any big cities and their accompanying light pollution and smog. That’s why it’s already home to a telescope or two, and the view will soon get a lot better. On a desert mountaintop, a U.S.-led international consortium has just broken ground on the Giant Magellan Telescope (GMT).

The first stages of construction will mostly involve putting in roads and power supplies. But when the telescope begins operating in 2021, GMT is expected to be the largest optical telescope on Earth–at least for a little while. It will produce images 10 times sharper than Hubble.

The GMT will combine seven giant mirrors to create a lens that’s about 85 feet in diameter. By comparison, the world’s current largest telescope of this type–the Great Canary Telescope in Spain–has an aperture of just 34 feet. And the space-based Hubble has a measly 8-foot mirror.

GMT’s larger mirrors will focus the incoming light from the stars, allowing astronomers to calculate how far away an object is.

Adaptive optics will help to make the telescope’s images sharper. The atmosphere is full of air pockets of various temperatures and densities that can distort incoming light. Some of GMT’s mirrors will be adjustable to compensate for this effect, helping to increase resolution and sensitivity.

But GMT will only be the best ground-based optical telescope for a little while. A year or so after GMT is scheduled to begin operating, the Thirty Meter Telescope will come online with its 98-foot mirror, as well as the European Extremely Large Telescope. The EELT will live up to its name, thanks to its 129-foot mirror.

Nevertheless, GMT should help to answer some pretty interesting questions. Its makers say it will be able to measure the composition of exoplanet atmospheres, find out how the first galaxies formed, as well as shed light on the nature of dark matter and the fate of the universe. So, you know, no big deal.