NASA’s VAB: a Garage for the Saturn V

The Vehicle Assembly Building is one of the most iconic buildings of the space age, the building designed to house... 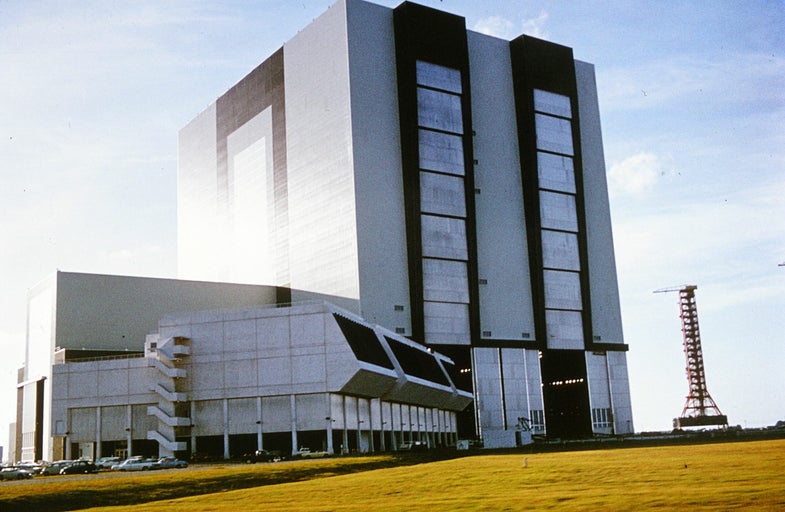 The Vehicle Assembly Building is one of the most iconic buildings of the space age, the building designed to house the upright Saturn V Moon rocket that is so large its shadow is startlingly visible in satellite pictures. Like the space program in the 1960s, it moved quickly from inception to completion. Pictures taken during its construction show just what it takes to build a garage for massive rockets.

The White Sands Proving Ground in New Mexico (which was renamed the White Sands Missile Range in 1958) was founded in 1945. It was a place within the continental United States where the Army could safely study and launch both recovered V-2 and American-made missiles away from populated areas. But before long the rockets at White Sands outgrew the test site. The Long Range Proving Ground committee was created to find a place to launch larger rockets with longer ranges. Possible sites in northern Washington with a range along the Aleutian Islands of Alaska and near El Centro, California, with a range along the coast of Baja Mexico were ultimately passed over in favour of the naval air station at Cape Canaveral, Florida. This site offered 15,000 acres of land in a favorable climate, a test range bordering the Atlantic Ocean, and was isolated from populated areas while still easily accessible by road, rail, and barge.

An early concept drawing of the VAB.

On May 11, 1949, President Truman established the Joint Long Range Proving Ground at Cape Canaveral and transferred command of the site to the newly incepted Air Force. On July 31, 1950, the first rocket lifted off from the site, a two-stage V-2 Bumper rocket.

A little over a decade later in 1961, the rocket game had changed. The military was still developing missiles as weapons, but the new National Aeronautics and Space Administration was also developing rockets that would carry men to the Moon. The rocket for this audacious mission was the Saturn V, a rocket larger and more powerful than anything Cape Canaveral had ever seen. Before it could go to the Moon, NASA had to find a way to build and launch the mammoth rocket.

Big Rockets Arrive at the Cape

The first step in turning Cape Canaveral into a Moonport was to expand the site. In 1962, NASA purchased 80,000 acres of land on Merritt Island on which it would establish the ground equipment and launch pads. But there was more to launching a Saturn V than a launch pad.

NASA contracted each stage of the Saturn V to a different company: the first stage went to Boeing, the second stage to North American Aviation, and the third stage to Douglas aircraft. Spacecraft contracts, too, were awarded to multiple contractors. The command and service module to North American and the lunar module to Grumman. Since the mission would be leaving from Florida it made sense to test and assemble all the pieces — the rocket stages and spacecraft — on site.

Assembling the Apollo stack directly on the launch pad was out of the question. There were too many prelaunch tests to run. Having the pieces of a rocket sitting on the launch pad exposed to the elements throughout the pre-launch phase of a mission was asking for trouble, particularly with Florida’s salty air and hurricane seasons. What NASA needed was a building that would shield the Apollo stack from the elements until it was ready for transfer to the launch pad.

The need for the full 363 foot Apollo-Saturn assembly site begat the Vertical Assembly Building; the name was changed to Vehicle Assembly Building on February 3, 1965 in anticipation of a future where rockets and spacecraft would be assembled, not necessarily vertically.

**Designing a Home for the Saturn V **

Designing the massive rocket assembly building fell to four New York firms collectively known as URSAM. Max Urbahn oversaw the architectural aspects of the VAB’s construction, Roberts and Schaefer covered the structural elements, Seelye, Stevenson, Value and Knecht were in charge of all civil, mechanical and electrical engineering considerations, and Moran, Proctor, Mueser and Rutledge were tasked with laying the building’s foundations.

The firms designing the VAB had to think through some challenges before settling on the final design. Acoustic pressure and vibrations from a launching Saturn V Was one problem. Though the launch pad was three miles from the site of the VAB, the acoustic pressure of about 145 decibels would have the power to damage the building’s skin. Another concern was the shape of the building. A simple square building tall enough to house the Saturn V could turn into a box kite during a heavy storm.

The architects and engineers eventually found solutions to these problems. They settled on a pile foundation and an array of cross-bracing beams to make the building structurally sound against adverse weather. Insulated aluminum panels fastened to steel girders would protect the VAB and anything inside it from any acoustic disturbances during a launch. 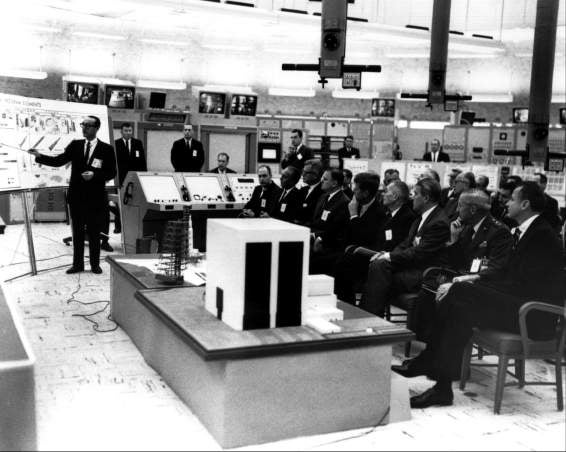 A VAB model seen during President Kennedy’s last trip to the Cape.

To facilitate assembling the Apollo-Saturn stack,engineers designed the building such that each piece of the rocket would be received into the Low Bay and moved into a check-out cells for processing. One check-outs were completed, the segments would move into the High Bay and stacked in one of the four integration bays. Maintaining this work flow meant the VAB had to be cavernous, clear of any permanent structures on the ground level, and have ample free space in the transfer aisles between bays. Seventy-one cranes and hoists, including two 250-ton bridge cranes, were installed to facilitate moving the rocket stages. Four high bay doors each 456 feet tall were designed to allow the rocket on top of its mobile launch umbilical towers to safely leave the VAB for transfer to the launch site.

By the end of 1962, NASA had signed off on the first stage of the VAB’s construction. The agency approved the final design on September 23, 1963.

Like the overall pace of the Apollo program, construction of the VAB was quick. Site preparations began on October 31 when the area was dredged and the land cleared for construction. The first foundation piles were driven into the ground on August 2, 1963.

More than 4,000 piles totaling 1.4 million cubic feet of concrete later, the VAB’s foundation was completed in May 1964. From there the building was slowly erected, made of some 45,000 metric tons of structural steel. On April 14, 1965, the last structural element of the VAB, a beam that was painted white and signed by all of the NASA and Corps of Engineers employees and all construction workers who had a hand in the VAB’s construction, was installed. By the end, the price tag had reached $117,000,000.

_Last week, this amazing album of never-before-seen photographs of the VAB’s construction was posted online… I’ve used a handful in the slideshow but it’s well worth looking through the full album on imgur! _ 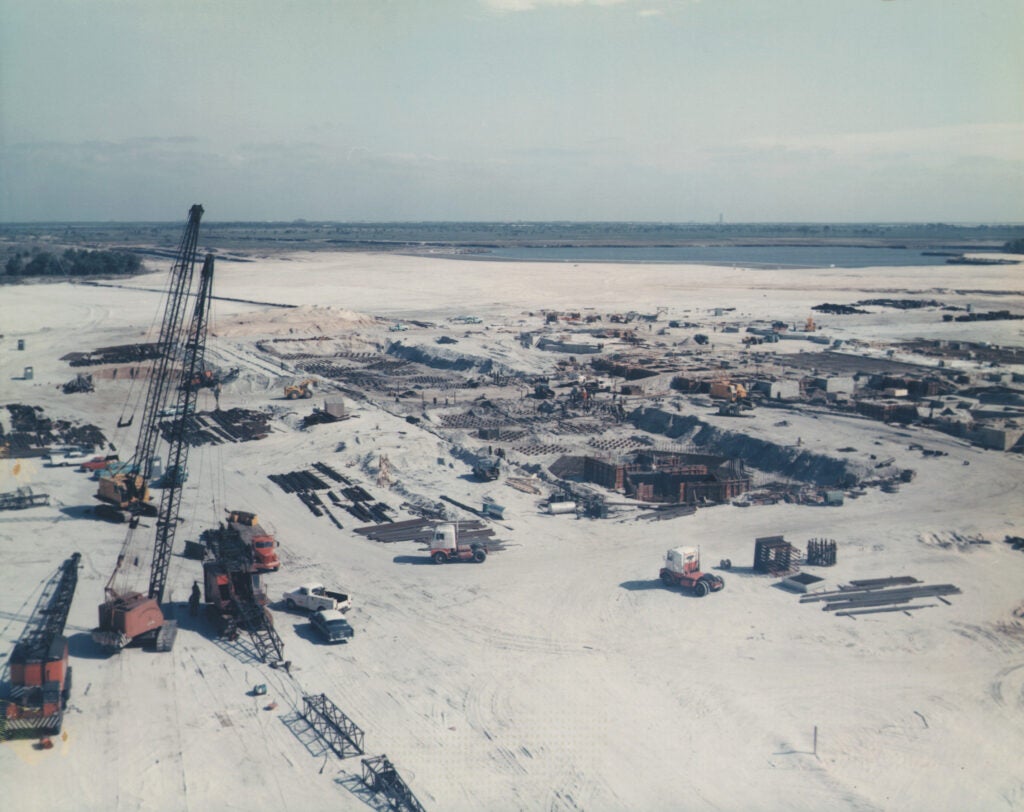 The site for the VAB being cleared before construction began in earnest. 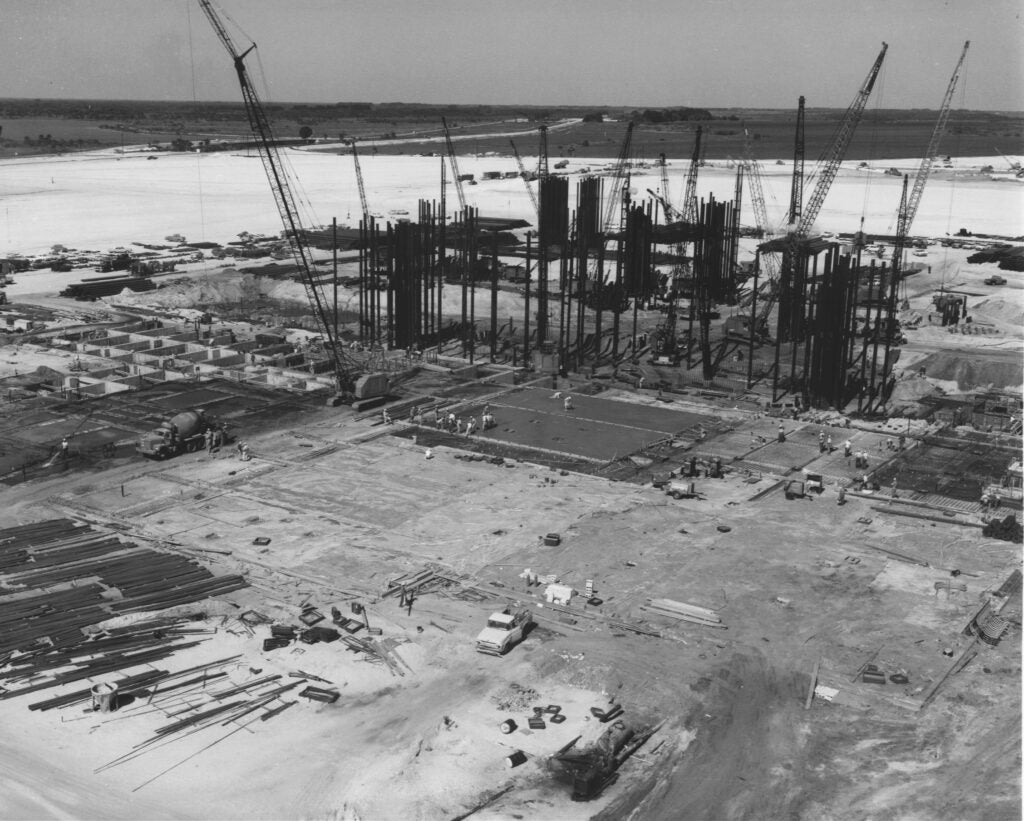 The first work done building the VAB was the steel piling. 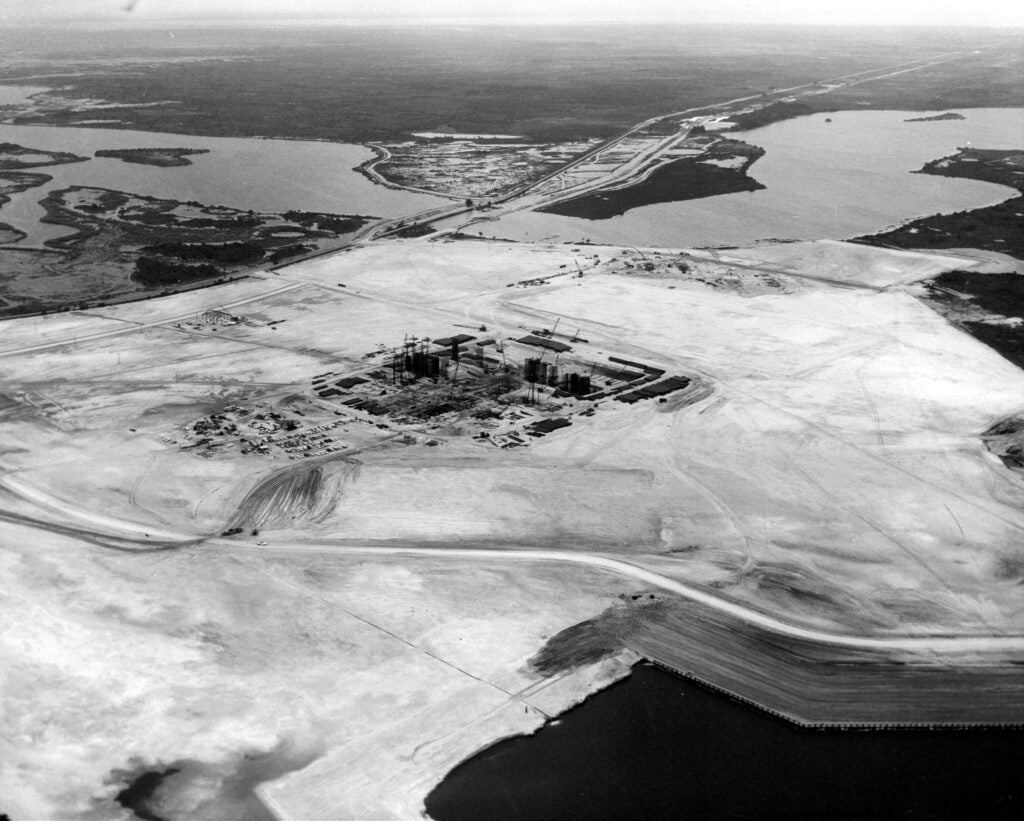 An aerial view of the first phases of the VAB’s construction. 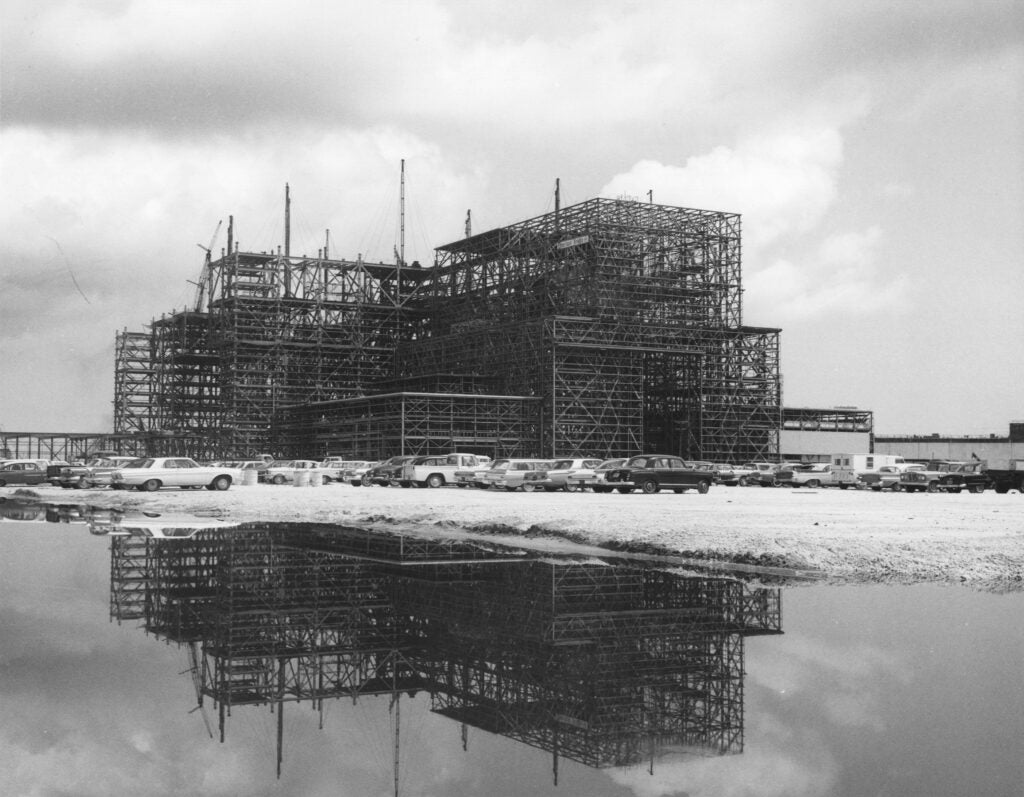 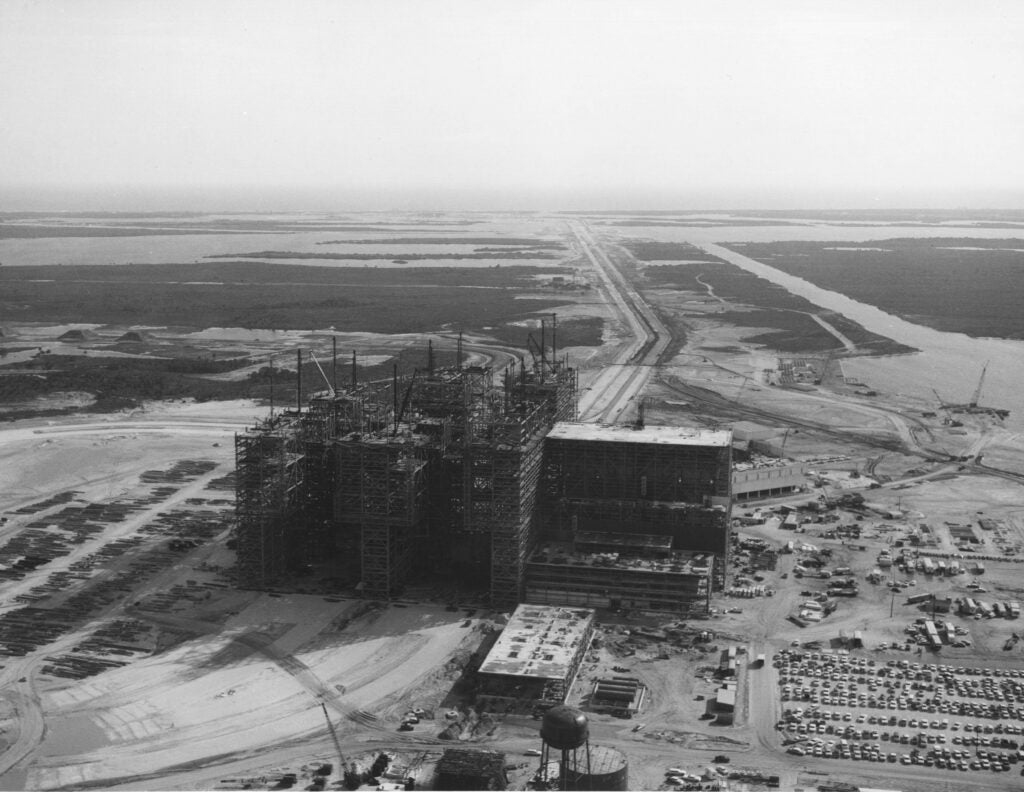 An aerial view of the VAB’s framework coming together. 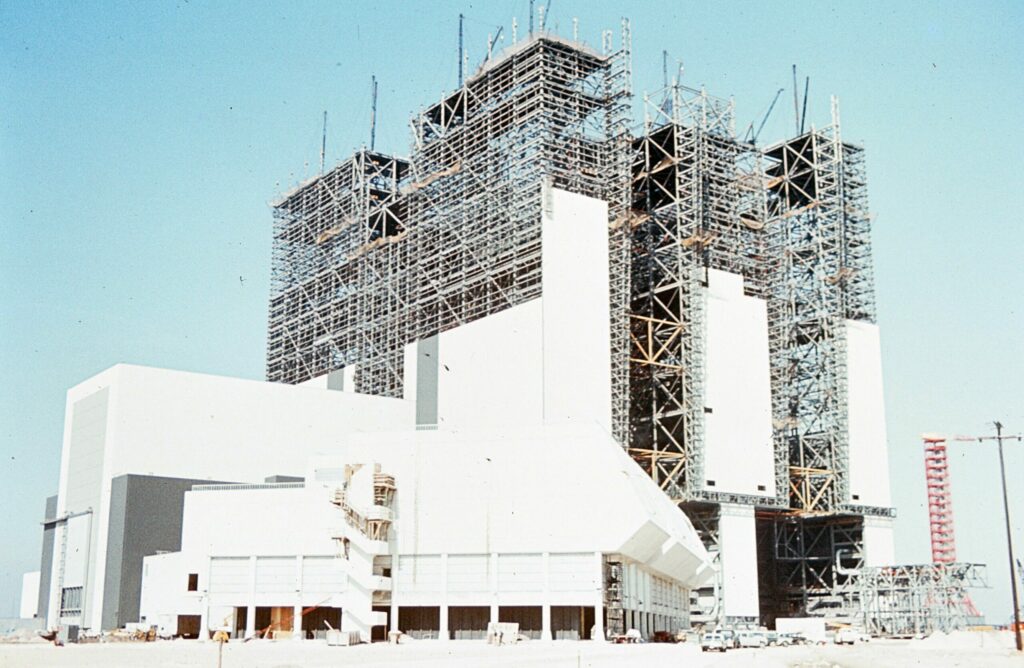 The VAB starting to look like a building and not a giant steel jungle gym. 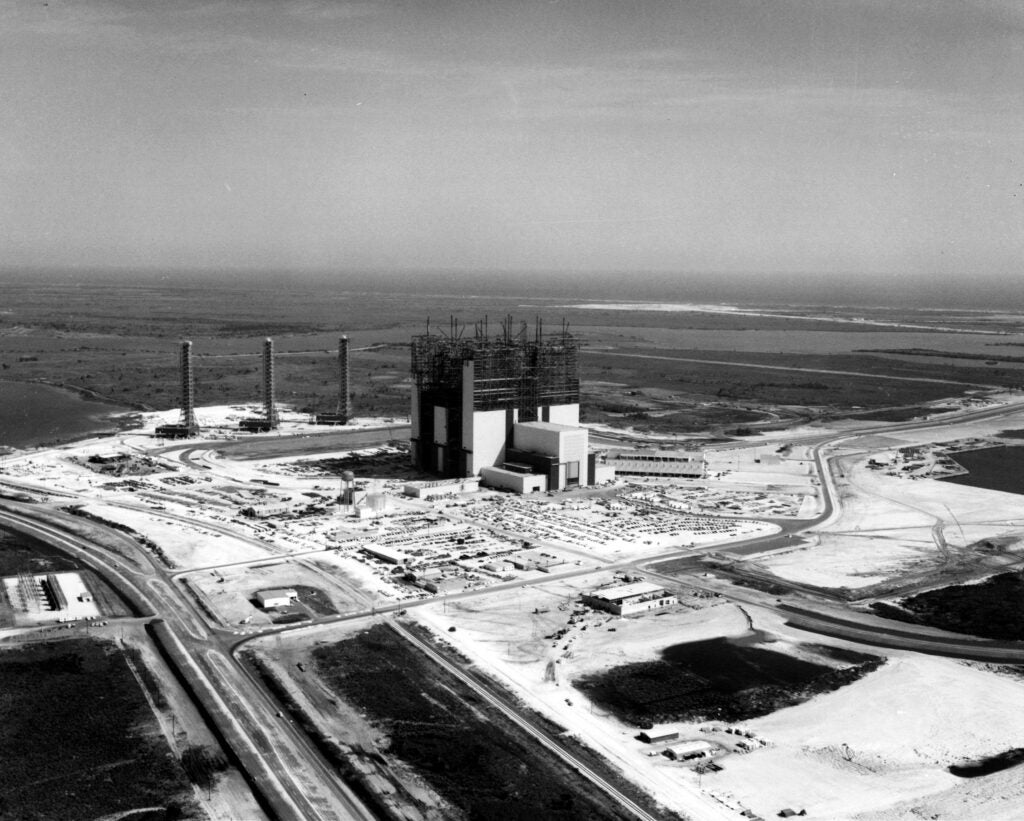 An aerial shot showing the VAB looking like the VAB… at least its lower half. 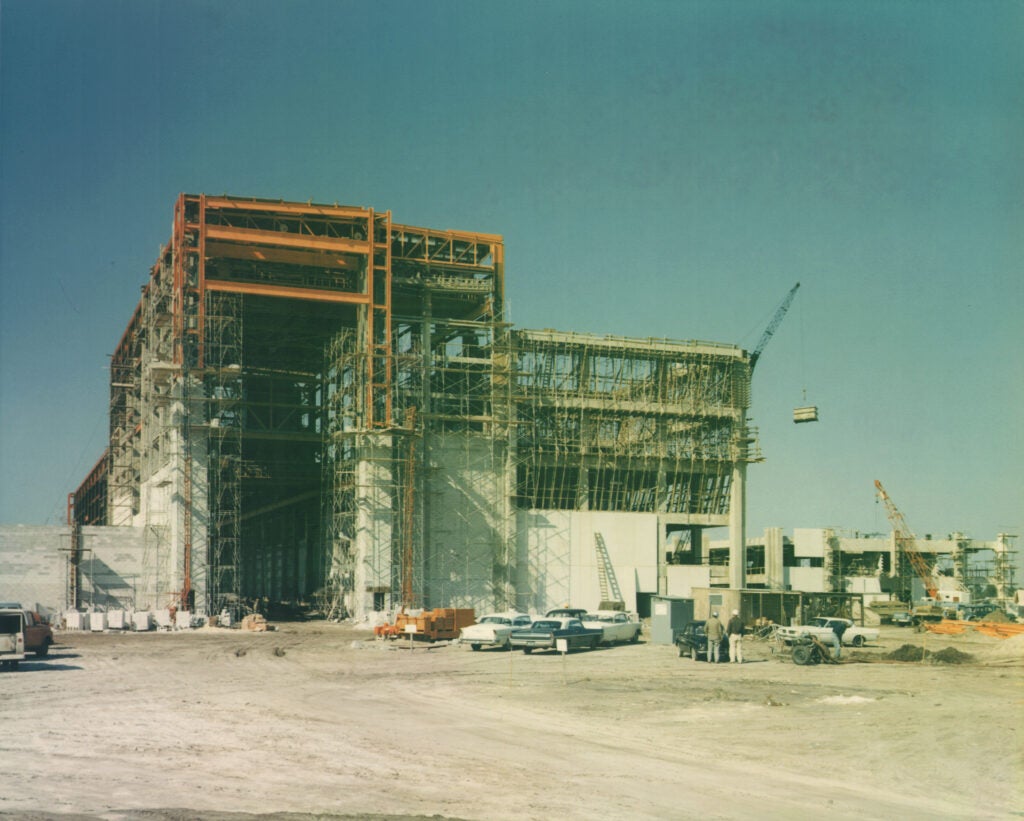 The VAB’s high bay are starting to look like a high bay. 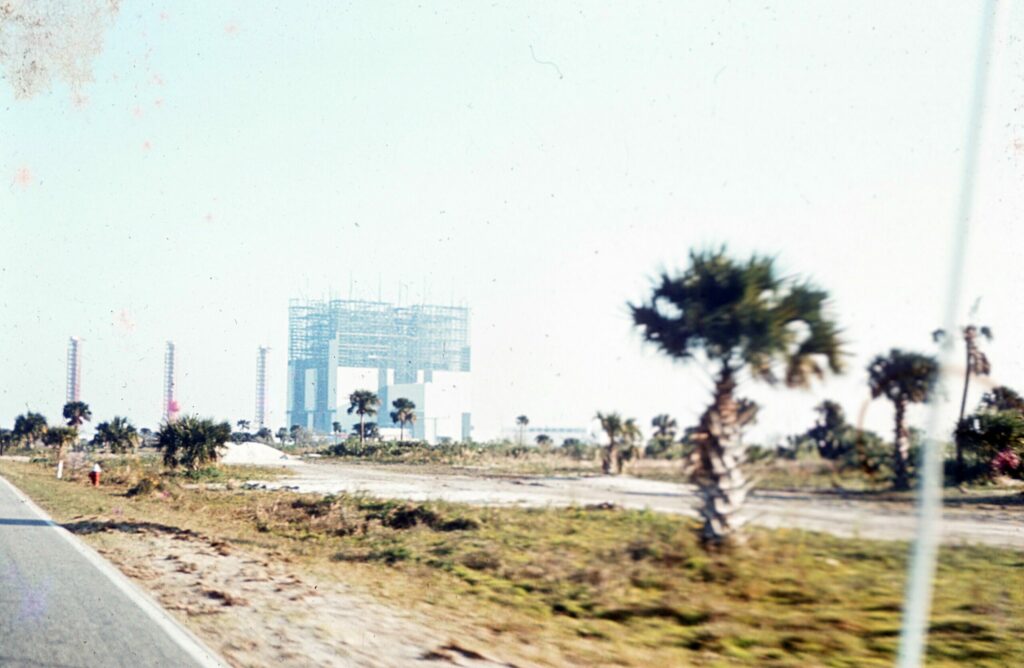 The half-built VAB as seen from the road driving over to Cape Canaveral. 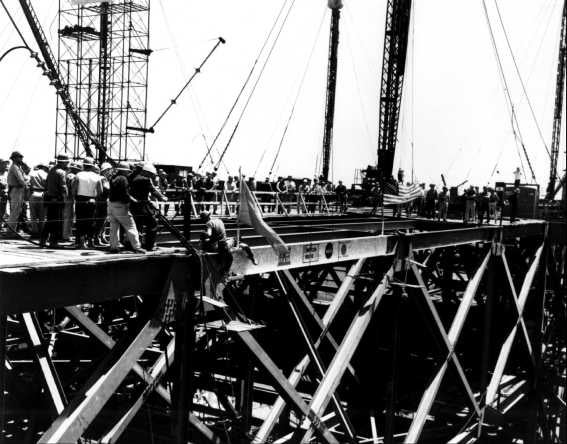 The final structural beam, signed by everyone who worked on the building, being installed in the VAB. The beam is still there today, though its hidden in the subroof. 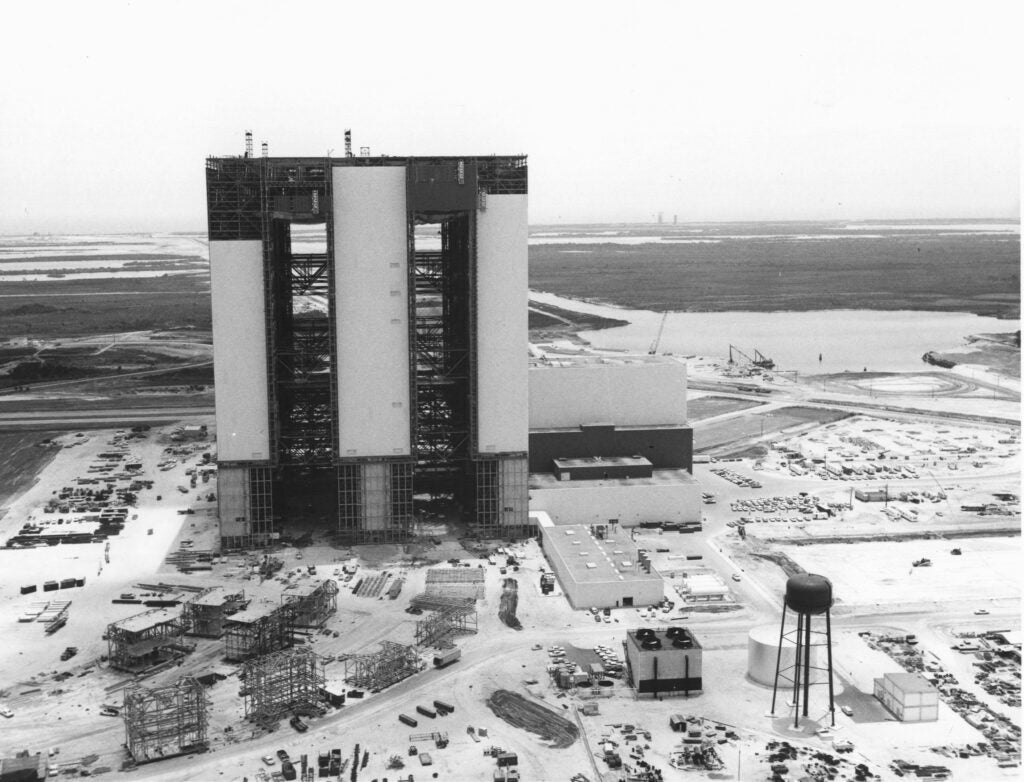 The nearly completed VAB. The structure was finished before all the internal elements. A gentleman walking along one of the beams inside the VAB during its construction. 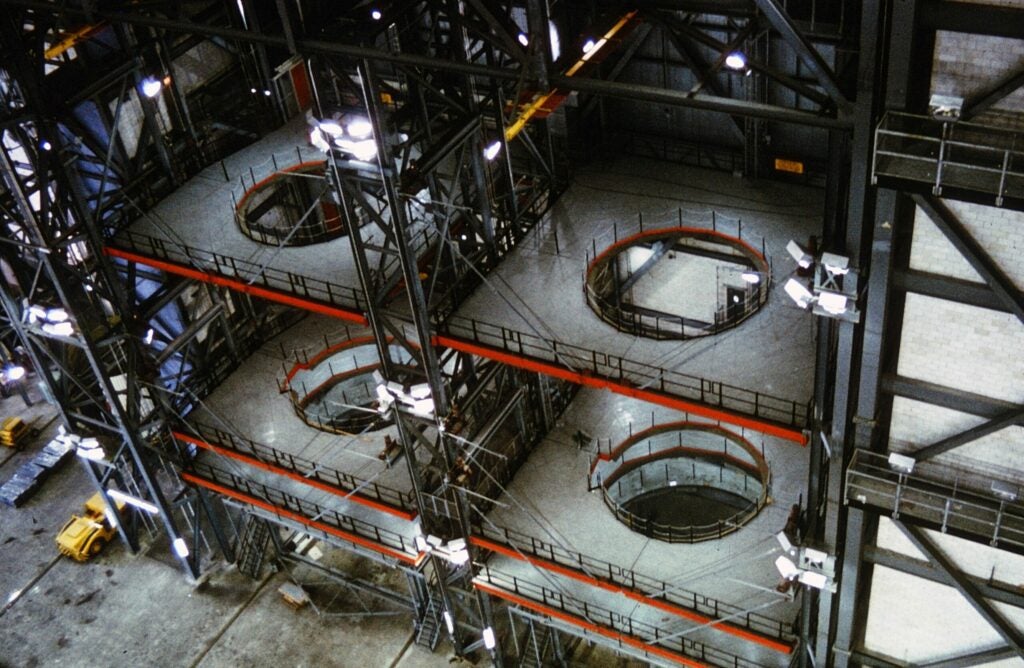 One of the VAB’s bays taking shape inside the building. 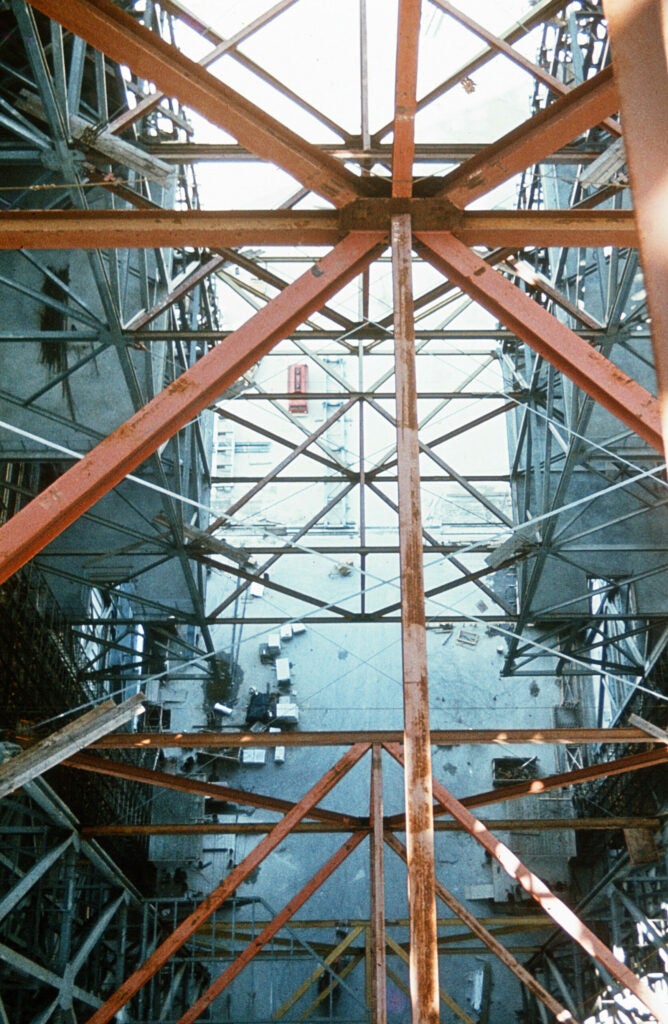 The view looking down on the VAB’s floor from up high during construction. 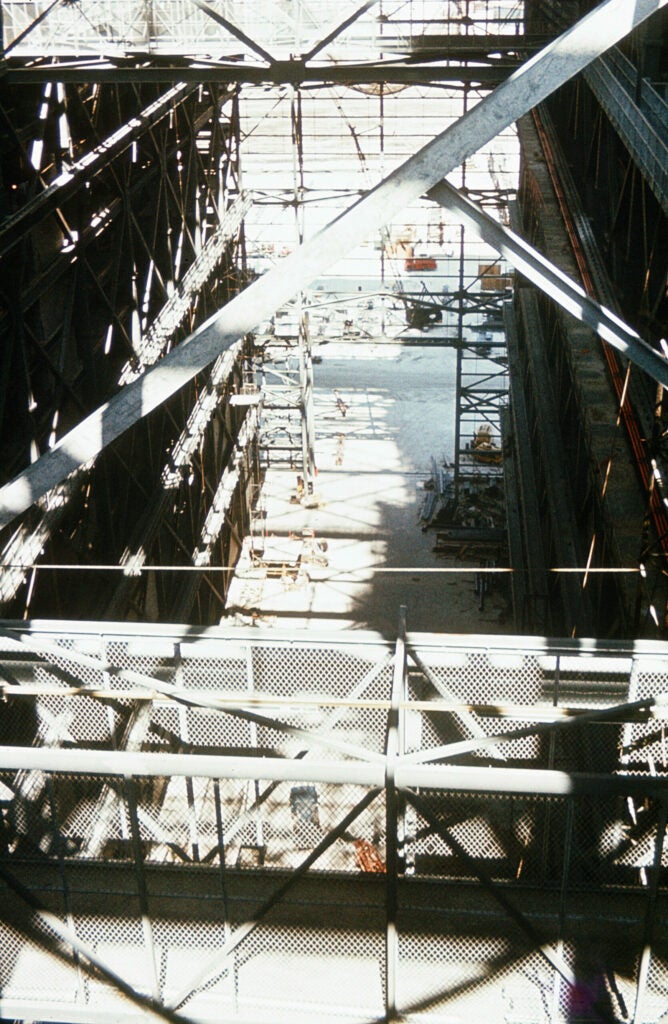 Another view looking down to the floor through the VAB’s framework. Looking up through the VAB’s unfinished roof. 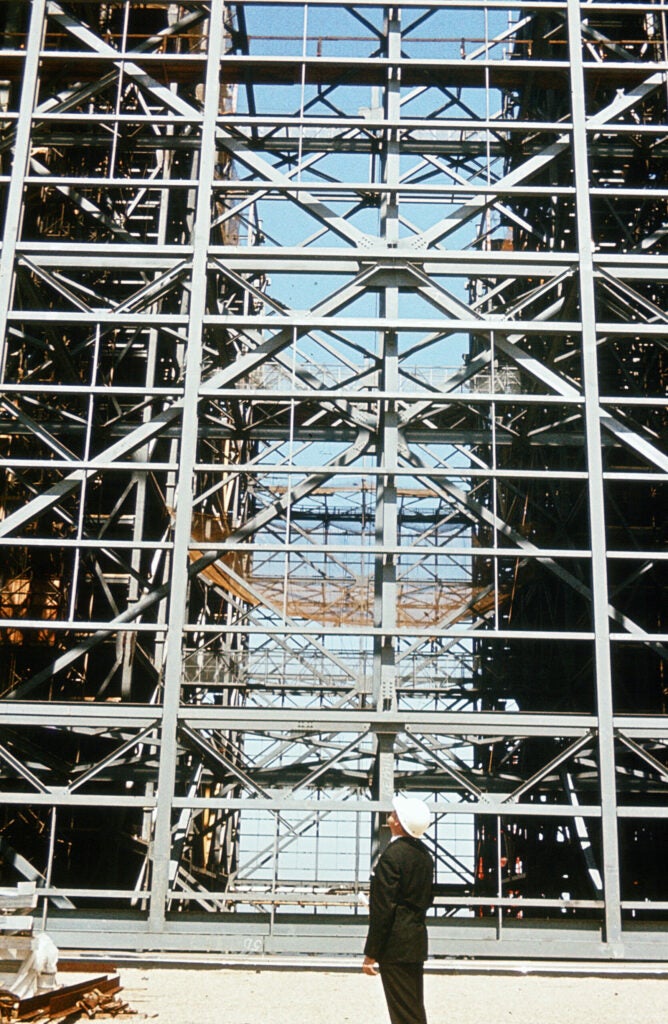 A gentleman looking up at the crossbeams that make up the VAB’s structure. 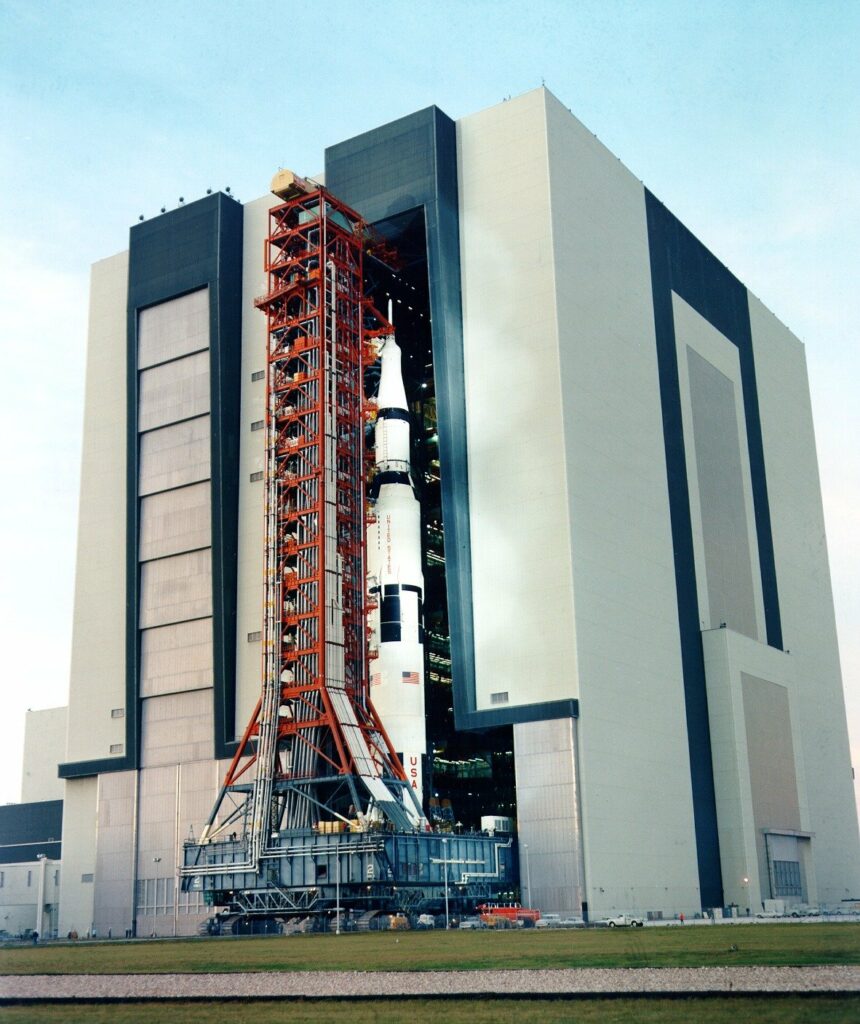 Apollo 14’s Apollo-Saturn stacks rolling out of the VAB toward the launch pad in 1971. 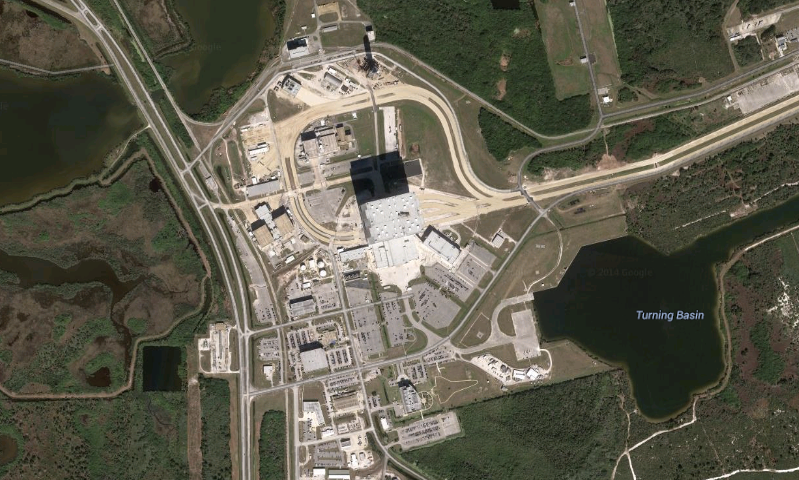 The VAB from Space

The VAB as seen on Google Earth. That black box is its shadow. It’s a massive building.
Space