Our dangerously depleted supply of spacecraft fuel just got a little bump from the Department of Energy. 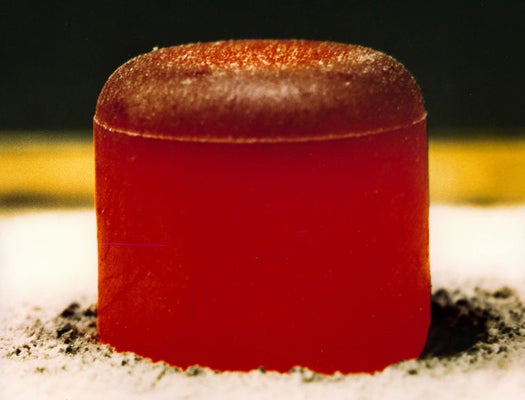 For the first time in more than two decades, the United States can put a “Made in the USA” stamp on non-weapons grade plutonium, Discovery News reports.

Plutonium-238 is an important fuel source for the radioisotope power systems that are used in spacecraft like the Mars Curiosity Rover and the New Horizon spacecraft that’s on its way to Pluto. As plutonium-238 decays, it gives off enough heat to generate electricity and keep all the expensive parts of a spacecraft warm in the cold, dark nether regions of deep space.

Until 1988, the U.S. produced its plutonium-238 (not to be confused with plutonium-239, the isotope in nuclear weapons) as part of its Cold War nuclear shenanigans. After the Savannah River Site, a major contributor of plutonium-238, shut down because of environmental issues, we turned to Russia for our plutonium needs, but that supply has run out as well.

Since 2009, we’ve been wringing our hands over how to get enough of the fuel to power our future space exploration. Congress threw NASA $10 million of its requested $30 million budget to start production, but denied the Department of Energy’s funding requests three years in a row.

In April, officials at the DOE finally announced production was underway, but getting supplies up to snuff could take up to eight years.

That process seems to be off to a good start, luckily. Jim Green, director of NASA’s Planetary Science Division, announced at a Mars exploration planning meeting that the DOE has successfully generated plutonium at Oak Ridge National Laboratory in Tennessee, according to Discovery News.

Green said he expects a little more than three pounds of plutonium to be generated per year. New supplies of plutonium could be mixed with the small existing supply of U.S. plutonium to bring the depleted plutonium up to the necessary energy density.