A team of U.S. researchers are investigating the possibilities. 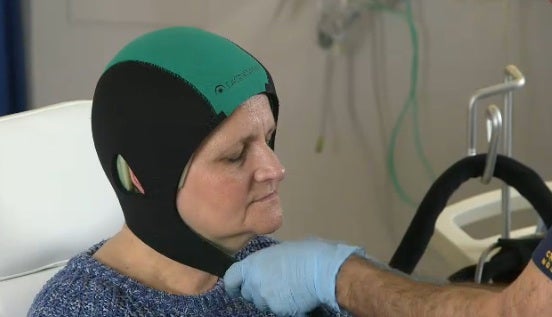 What’s the first thing you’d want to know if you learned you had to undergo chemotherapy? Oncologist Susan Melin of the Wake Forest Baptist Medical Center in North Carolina told the Associated Press that often, her patients ask first about hair loss. “It’s not, ‘Is this going to cure me?’ It’s, ‘Am I going to lose my hair?'” she said.

U.S. researchers are now conducting trials on one brand of cold cap, called DigniCap, meant to reduce that hair loss. The caps are connected to machines that chill them to around 41 degrees Fahrenheit. The idea is that by slowing blood flow to the scalp, they reduce the amount of chemotherapy drug that reaches the scalp and destroys hairs.

While the caps are commonly used in Europe and Canada, they haven’t been well studied enough for scientists to know for sure if they’re safe and work well, the Associated Press reports. They aren’t U.S. Food and Drug Administration approved. If the U.S. trials show the caps work, however, they could get approved, become eligible for coverage by insurance and become more popular in the U.S. (Patients in some U.S. cancer centers may already bring their own caps to the center, if their doctors agree.)

Good results would be a big boon for cancer patients. Although the chilly caps don’t help with big guns like life expectancy or remission rates, they address a major concern for many patients. And why not? It’s your hair. The vast majority of people in the world have it. It’s understandable that some cancer patients get upset when they lose theirs.

Oncologists the AP talked with mentioned patients who delayed therapy because of hair concerns, as well as patients who lost business because their hair loss made them look “sick” to business partners.

The main safety concern is that cap-wearers could get reoccurrences of their cancer in their scalps, since the caps reduce drug flow there. However, cancer reoccurrences in the scalp are rare, the AP reports. A side effect of the cap is that it’s painful to wear because it’s so cold, Miriam Lipton, a breast cancer patient who tried the DigniCap, told the AP.

The major U.S. trial will study early-stage breast cancer patients, beginning late this summer. Dignitana, the Sweden-based company whose caps are being used in the trial, has information on how to join a trial.