Mitt Romney’s Space Plan: After the Election, Figure Out Some Better Goals Than Obama’s

The Republican nominee for president calls for a more coherent strategy in space, without actually providing one. 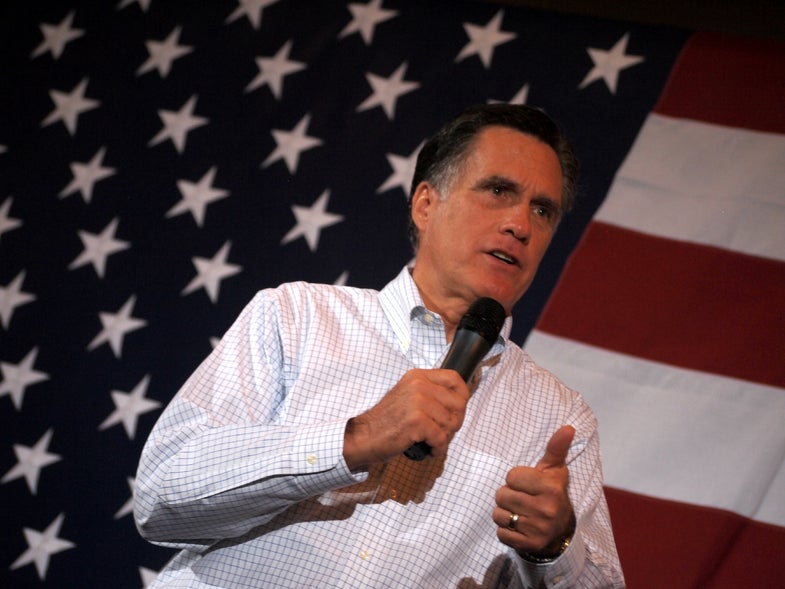 Republican presidential hopeful Mitt Romney has unveiled his position on space issues and laid out his roadmap for NASA and the strengthening of America’s role in space. His stance on American space policy probably won’t surprise you. At the very top of Romney’s list of American space science priorities is: Hasn’t Obama done a horrible job with the space program?

In a white paper released this week titled titled “Securing U.S. Leadership in Space,” Romney does make some strong points about NASA and the American space program, though they are probably things we all agree upon. “Space is vital to our national interests” (agreed), Obama’s space policy is disjointed and unclear (okay, we’ll concede the point for now), and NASA needs a set of coherent, practical goals and that are clearly prioritized (also agreed).

What this policy paper fails to do is provide a coherent list of practical goals, or to list any tangible priorities. “President Obama has failed to deliver a coherent policy for human space exploration and space security” the paper reads, just three paragraphs in. The paper pledges that Romney will reverse this course and “set a clear roadmap for space exploration,” though it seems he plans to figure out what this roadmap will look like sometime after the election.

For it’s lack of a clear path for the next four years, however, it is not short of criticism of the past four years of space policy leadership. Far longer than the section titled “The Future of the U.S. Space Program” is the section immediately following, titled “President Obama’s Failure,” in which the Romney team even quotes a certain consumer science publication (somewhat out of context) to argue that on Obama’s watch the federal government has lacked vision and leadership, broken promises to the state of Florida, and otherwise ruined space forever with the cancellation of the Constellation program.

So what would a Romney presidency bring to the table instead? Again, assurances are vague. Romney supports commercial space (so does Obama, so that’s a wash). And a Republican White House would push hard for international collaboration in achieving America’s space goals (which will be named later). In fact, the paper really only makes a couple of things absolutely clear: First, NASA doesn’t need more money to be more effective, and it won’t get any from Romney-Ryan. And secondly, what NASA really needs is Mitt Romney. Or at least not Obama.