The Science Behind PPX

What's the most accurate way to forecast the future? Simple: make predictions profitable—just like on the PopSci Predictions Exchange 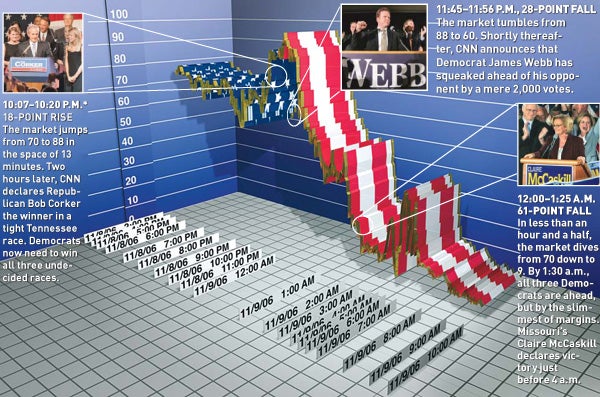 Here at PopSci.com, we’ve launched the PopSci Predictions Exchange–the first online market dedicated to trading the future of science and technology. It’s totally free, and you don’t need any experience to sign up (although reading this feature on the science that makes the market tick might help a bit). Check out ppx.popsci.com after you’re done here to begin trading today.

Should you believe anything that NASA announces? More specifically, should you believe that anything the space agency says will get done by a certain date will in fact happen by that date? NASA’s track record is not good. Shuttle launches are almost invariably postponed, by an average of about two weeks. The International Space Station, which depends critically on the shuttle for its construction, was supposed to take five years and 37 shuttle flights to build. It’s been a decade, and we’re 16 missions away from finishing a vastly pared-down project. So when NASA says it’s going to finish building the ISS by the end of 2010 (as indeed it must, because that’s the last time the shuttle will be allowed to fly), you could be forgiven for questioning just how likely that really is.

But how can we know? How, for that matter, can NASA know? Building a $100-billion multinational orbiting space platform is, after all, a rather complicated business; uncertainty is everywhere. One of the shuttle’s many thousands of parts could malfunction, or Congress could order a review, or an ill-timed storm could strike central Florida. And sometimes the worst happens, and tragedy delays the program for years.

There are far too many variables for any single person-not the NASA administrator, not the shuttle program manager-to fully comprehend. But if no one can absorb all the available data, how can anyone expect to make accurate predictions about what that data implies? How can we know what’s going to happen if we can’t even know what’s happening now?

Here’s how: We can ask the market.

**ENGINEERING AN ORACLE
**
A prediction market is like a stock exchange, except people trade not stocks but predictions. The first and most famous prediction market, established at the University of Iowa business school in 1988, was designed to forecast the outcome of that year’s presidential election-which it did, with remarkable precision. Anyone could join the market and buy or sell propositions such as “What percent of the popular vote will George H.W. Bush receive in the presidential election?” Traders who thought Bush would get 60 percent or more of the vote would buy the shares if they were less than $60. Traders who disagreed would sell. The market price reflected the consensus view, which turned out to be more accurate than any of the six polls released in the week before the election. But if predicting a landslide Bush I victory over Michael Dukakis seems like fish-in-a-barrel stuff, consider that the Iowa Electronic Markets have correctly predicted the winner of the popular vote in every national election since then, and with greater accuracy than the Gallup poll in all but one of those years. It achieved this success by relying not on the oracle-like knowledge of a single “expert” or small group of pundits, but on the power of the market to efficiently gather the intelligence of traders and agglomerate them into collective wisdom.

And so, getting back to NASA, if we want to know whether the space agency will complete the ISS, we should consolidate into a single price all the available knowledge about the project and then start trading. Here’s how it works: We create a security (the “proposition”) that asserts: “NASA will complete building the ISS by the end of 2010.” If, at the end of 2010, NASA has indeed completed ISS construction, everyone holding that security receives $100. But if it does not finish, everyone holding that security gets zilch. Between now and then, anyone can buy and sell that proposition for an ever-fluctuating amount of money between $0 and $100. If you think it’s 60 percent likely that NASA will finish, you’d be willing to bet up to $60 in order to earn that $100. Therefore, you’d buy that proposition if it was selling for $60 or less. If you lost confidence, you’d look to sell.

In a market set up like this, a proposition trading at $75 means that there’s a 75 percent chance that the proposition will turn out to be true. But the amazing thing about these markets is that they’re not just one effective way to forecast what’s going to happen; they’re the best predictors of future events. “We have yet to find any domain where experts beat the market on predicting the future,” says Justin Wolfers, a professor at the University of Pennsylvania’s Wharton School of Business. “When I talk to people who are not economists, they find that amazing, but if your expectations are better than the market’s, then let’s go bet on the market,” because if you have information that indicates that the market price is incorrect, then there’s easy money to be made. Or: If you’re so smart, why aren’t you busy getting rich?

**A GROWTH MARKET
**
Inspired by the success of the Iowa markets and enabled by the networking power and efficiency of the Internet, innovators have been coming up with ever more creative ways of using markets to predict the future. The Hollywood Stock Exchange sprang up in 1996 to let amateur moguls bet on a movie’s opening-month box office. Companies like Hewlett-Packard and Microsoft created internal markets so that employees could bet on how well a new product was going to sell or whether an important project would meet its deadline (senior management was often disappointed to learn the cold, inevitably accurate judgment of the market). Offshore gaming sites like intrade.com started offering nonsports gambling along with NFL and baseball futures. At one point in 2003, anyone in the world could go online to buy shares of contracts that would pay off if the U.S. ousted Saddam Hussein, Special Forces killed Osama bin Laden, or a jury of his peers convicted Kobe Bryant.

Convinced of the power of such markets to predict the future, researchers are now exploring how to expand the markets’ reach. They’re investigating techniques that use markets to divine the consequences of yet-to-be-made decisions. If these “decision” markets take off, we won’t just be able to see the future, we’ll know how to bend it to our will.

**ASK THE RIGHT QUESTION
**
During the buildup to war in Iraq in 2003, pundits filled the 24-hour news cycle with predictions about what would happen once the U.S. invaded. Either the Americans would be greeted as liberators, or they would ignite an endless war that would consume the Middle East. Gas prices would go up, or they would go down. The economy would soar or swoon, and no one could offer anything more than arguments as to which would be the case.

One problem with these predictions was just how predictable they were: Hawks claimed that success was inevitable, doves warned of impending doom. People believed what they wanted to believe, because there was really no hard data clearly linking an immediate decision with a particular outcome. Ultimately, the only way to find out what would happen if the U.S. were to go to war with Iraq was to go to war and see. History would judge.

Yet history is slow. What we want, what the people making important decisions need, are methods more powerful than partisan argument and inference to guide those decisions. They need a little mirror to help them see around the corner of the future, no matter how incomplete that view may be.

Consider the “Saddam security,” a proposition on intrade.com that paid out only if Saddam Hussein was out of power by July 30, 2003. It functioned, in the days before the war started, as a measure of the likelihood that the U.S. would invade (traders did not put much stock in the possibility that Saddam would retain power if American forces entered Iraq). Wolfers and Eric Zitzewitz, a professor at Stanford University’s graduate school of business, tracked the movement of the Saddam security and compared it with changes in a variety of global markets to analyze how traders were responding to the possibility of war. Their methodology was straightforward: “If a 10 percent increase in the probability of war caused the stock market to fall by one and a half percentage points,” Wolfers says, then he could extrapolate to 100 percent and conclude that “the difference between war and peace would cause the market to decline by 15 percent.” That’s bigger than the drop in the days following September 11, 2001. Wolfers and Zitzewitz found that short-term oil prices also shot up when war appeared imminent but long-term prices fell, presumably because of the chance of cheap Iraqi oil eventually hitting the market.

All these inferences were clear in the weeks and months leading up to the final decision to invade, but this was also a special case: There was arguably no more important factor in the price of oil or the health of the U.S. economy in early 2003 than a U.S. invasion of Iraq. The price also moved around enough to let us tease implications from its movement. But what if we wanted to uncover the effects of an event that had a fairly stable probability-how the capture of Osama bin Laden would affect the airline industry, for instance.Or what if we wanted to determine how the market would react to a relatively minor input, like a new trade accord?

The best way to understand these types of “if/then” questions is to create a conditional market, also known as a decision market. These simply offer two complementary propositions: “How much will x be if y occurs?” and “How much will x be if y does not occur?” Substitute anything you want for x and y: “The price of the S&P 500″/ “Troops withdraw from Iraq.” “Gas prices”/ “Drilling begins in the Arctic National Wildlife Refuge.” Then take a look at how the two complementary propositions are trading. If the market expects the S&P 500 to reach 1,650 if troops withdraw but only 1,500 if troops do not withdraw, then you have a clear view of the financial consequences the stock market attaches to our military policy: a difference of 150 points. “I’d love to see more of these complicated questions being asked, like what will happen in the housing market if Hillary Clinton wins the election,” says David Pennock, a senior research scientist at Yahoo and head of its prediction-market research. “We could put forth the clear decisions we have to make as a country and examine their implications.”

The trouble with these markets is in getting enough people to participate. It’s legally precarious to set up a decision market in the U.S. (trading these propositions looks suspiciously like Internet gambling to some-although by those standards, so does investing in pork-belly futures). Most American ventures use play money, which surprisingly enough, generates predictions as accurate as those of real-money markets. These fake-money markets need to attract traders by being entertaining, not by offering the possibility of riches. It’s no wonder the U.S. market with the most trades is the Hollywood Stock Exchange.

Without the lure of real money to be made off other, perhaps less-savvy market participants, it’s hard to recruit enough traders into a decision market that creates insight into serious yet perhaps more mundane issues. But it can be done. We have the crystal ball at our fingertips. All that’s left is to look into it together.

Michael Moyer is the executive editor of_ Popular Science.

Armed with your new knowledge, start an account on PPX today.