BeerSci: Want To Wet-Hop Your Beer? Grow Your Own Fresh Hops 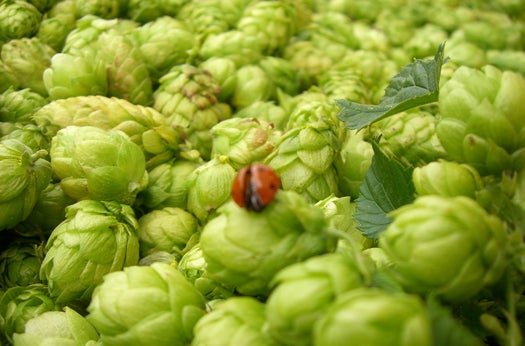 A couple of months ago, a colleague asked me if one could grow one’s own hops. The answer is an emphatic YES. If you have some space outdoors and something that’s tall enough to let the hop plants grow, you can be the proud owner of some homegrown hops.

Hops, as I discussed in an previous column, are a member of the Cannabinaceae family of plants. Hop plants are dioecious, which means that the species has individual male and female plants; for brewing purposes, you only want the female plants, because they’re the ones that produce the hop flowers. If you’ve never seen a hop before, you might not know that the hop plant is a bine — that’s right, bine with a b. Both bines and vines are climbing plants, but whereas vines use tendrils or suckers to hold onto the vertical surface as they grow tall, bines helix their entire stem around the support. You’ll want to keep that in mind when you build your hop trellis, and give the bines some room to grow.

The first thing to consider is habitat: hops are what is known as a short-day plant. That is, they only begin to flower when they experience short days and long nights during part of the yearly growing cycle. Hops most optimally grow between 35 and 55 degrees latitude. Those of you who live outside of those latitudes (especially closer to the equator) can still grow hops, but your yields may be crap.

Next, you’ll want to find a spot that gets a lot of sun: hops like getting at least 8 and up to 15 hours a day during the summer, so don’t hide the plants behind a tree or in a shaded corner of the garden. Hops need good air circulation (to limit chances of mildew) and plenty of water, and they prefer well-aerated soils.

Once you’ve picked a spot, build your hop trellis. You’ll want a structure that’s at least 15 feet tall, plus some space to grow horizontally once the bine reaches its full height — some can grow to more than 25 feet long and weigh more than 20 pounds, so be sure you build a sturdy trellis. Most hop growers build the support structure, then run twine or wire to the ground; the hop bines grow up the wires.

There are so-called “dwarf” or “hedgerow” hop varietals, which have bines about 10 feet long, available as well. The hedgerow varieties are most-often cultivated in UK, but some U.S.-based farmers are also growing them. If you’re growing hops in an urban environment, such as on the fire escape, a dwarf plant might best fit your needs. The main downside to dwarf plants is a lower-yield-per-acre (no surprise, that, as shorter bines mean fewer places for flowers to grow). 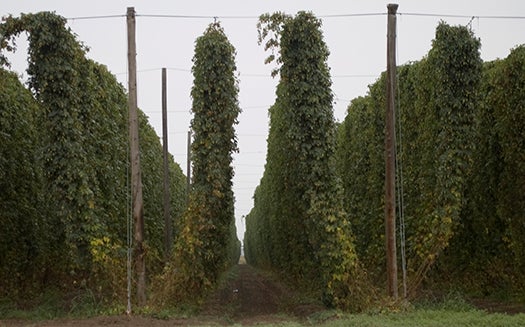 Hops grow on trellises on the Yakima Indian Reservation in Washington State.

Hops aren’t propagated by seeds. Instead, you buy a rhizome from one of a number of producers or homebrew supply shops. Rhizomes are basically an underground stem; you’re probably most familiar with the rhizome ginger root. Rhizomes generate both roots and shoots, which means that once you plant it in the ground, you’re pretty much good to go as far as getting a useful plant out of it. Do be sure to plant the rhizome root-side down. Once the shoots poke through the soil, train the best-looking ones around the support (you’ll need to train the shoots for a few days before they start winding themselves), and clip off the sorrier-looking ones.

If you’re feeling especially leery of starting from bare rhizome, or you want to grow the hops on your fire escape quickly, I’ve found sprouted hop plants for sale at various sites, such as here, here and here. No word on how much easier and quicker they are to grow than the bare rhizome.

When dreaming of your upcoming hop harvest, be sure to check some of your expectations. The first year you won’t get too many hops; the plants need at least a year before they reach peak yield. And you’re not going to be harvesting Simcoe or Amarillo, for example, because those varietals are patented and the rhizome is nigh-impossible to buy on the open market. (If you wish to circumvent IP, that’s your business–we don’t want to hear about it). Instead, pick varietals that are in the public domain, such as Fuggles, Centennial or Cascade. It’s something of a pity that winter took so long to leave (I sure as hell wasn’t thinking about digging in frozen ground even two weeks ago), as there aren’t that many hop rhizomes currently for sale. But a bit of judicious googling will find you some rhizomes up for grabs. If you strike out completely, you might want to use this summer to explore building the hop trellis, then pre-order your rhizomes for delivery next February. Once you have those hops in hand, you’ll be one of the lucky few capable of brewing “wet hopped” or “fresh hopped” beers–that is, using hop cones in your brew within a few hours of the plants being harvested.