When Did Primates Learn To Metabolize Alcohol? A Chemist Reenacts Drunk History

According to this laboratory study, the desire for a stiff drink could go further back than we think. 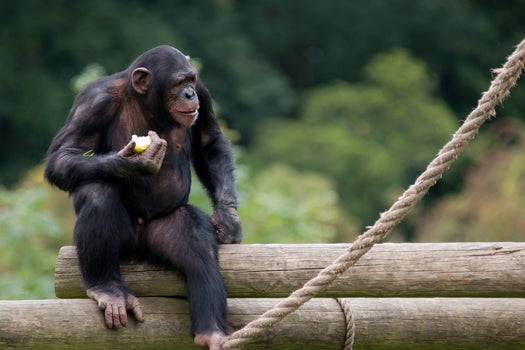 Humans have been fermenting alcoholic beverages since as early as 10,000 B.C., but we’ve probably enjoyed the effects of natural fermentation much longer than that. Our ability to digest alcohol might have sprung from a primate ancestor that ate fermenting fruits, a new theory suggests.

Humans metabolize the ethanol in alcoholic drinks thanks to enzymes called alcohol dehydrogenase 4, or ADH4. Other primates have ADH4 enzymes, but not all can metabolize ethanol. To analyze how ethanol digestion changed over time, Steven Benner, a chemist at the Foundation for Applied Molecular Evolution, built enzymes in the lab that estimated how extinct primates metabolized alcohol.

Benner and his colleagues looked at the DNA stretches responsible for ADH4 in 27 modern primates. Using lemurs, monkeys, apes and humans, they mapped the DNA sequences on an evolutionary family tree for primates going back 60 million years, estimating what genes could have looked like for extinct primate ancestors. Then they resurrected these ancient ADH4 proteins in the lab.

They found that for most of our ancient ancestors, ADH4s were inactive against ethanol, although they could metabolize other alcohols, like those found in the leaves of plants.

Ten million years ago, though, a common ancestor of gorillas, chimps and humans emerged with an enzyme that could digest alcohol 50 times more efficiently than earlier incarnations. Benner proposes that this ancestor became more terrestrial, rather than primarily tree-dwelling. He introduced his theory at the annual meeting of the American Association for the Advancement of Science on February 15.

With the availability of fermented fallen fruit on the ground, those forest-dwellers with the ability to digest alcohol would have had an evolutionary leg up. Species like orangutans, which primarily live in trees, didn’t evolve to metabolize ethanol, perhaps because they wouldn’t have run into fermented fruit living above-ground.

However, it’s still up for debate whether or not the last common ancestor of humans, chimps and gorillas actually spent time on the ground or lived entirely in trees. “We’ll be able to evaluate it with better evidence as we find more fossils from that time period,” biological anthropologist Jeremy DeSilva told Science News.

Still, this is a good enough excuse to add drinking back into your Paleolithic diet.