A Working Transistor Built Out Of DNA Within A Living Cell

We're this close to having a usable biocomputer. 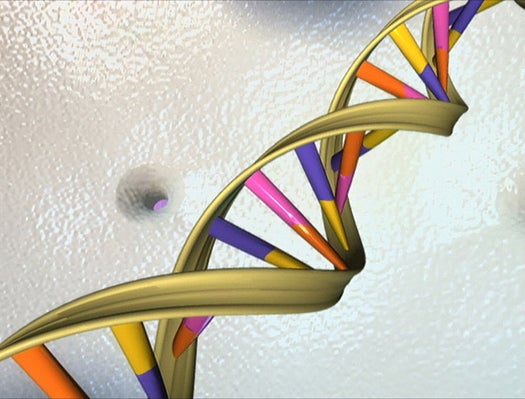 Pretty much anything can be a computer, if it can compute logical functions, store data, and transmit information — even living cells. A team at Stanford University has accomplished one of the the final tasks necessary to turn cells into working computers: They’ve created a biological transistor, called a transcriptor, that uses DNA and RNA instead of electrons and responds to logical functions.

Drew Endy, an assistant professor of bioengineering, has previously made other vital contributions to biocomputing. Last year, his lab developed a “biological Internet” that can transmit genetic information between cells, as well as a rewritable data storage system for DNA.

Building a system with logic gates that can compute true-false answers from biochemical information is the third component in creating a biological computer. The work is detailed online in Science.

Rather than regulating electrons along a wire, the transcriptor controls the flow of RNA polymerase (the enzyme that produces RNA) along a strand of DNA. To create biocomputers that would be able to function across a wide variety of organisms, the researchers used enzymes that function in animals, plants, bacteria and fungi. Like a transistor, which amplifies electrical signals to allow them to travel farther, the transcriptor can amplify genetic logic, allowing small changes in enzyme activity to trigger much larger changes in gene expression.

Because it can compute digital logic (with Boolean Integrase Logic gates, or, awesomely, BIL gates) it could tell you if the cell has been exposed to stimuli like caffeine or glucose. You could program the cell to start or stop reproducing based on certain factors, and using Endy’s biological Internet, coordinate behavior across groups of cells.

This could allow us to one day detect disease and deliver medicine from within the body itself. The researchers have put their work into the public domain in the hopes that other scientists will build upon their research and usher in the biocomputing age as quickly as possible.