Watch A Ferrofluid Sculpture Move To The Rhythm

And get your own, via Kickstarter. 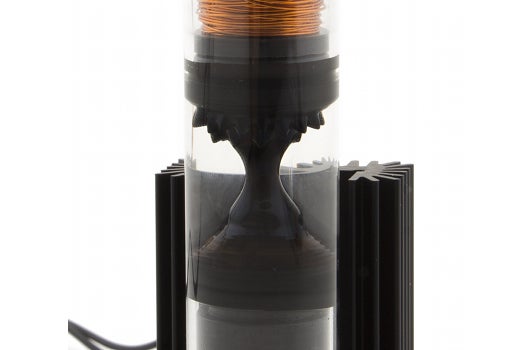 Though they’re primarily used in speakers and hard drives, ferrofluids — liquids that respond to a magnetic field like a solid — also make awesome art installations. When in the presence of a magnetic field, tiny particles of metal (usually iron) suspended in oil become magnetized and move in crazy ways.

Determined to make an ferrofluid art installation you could put in your house, Russell Garehan invented Ferrocious, a “moving liquid sculpture that responds to sound.” It’s sort of like a lava lamp that dances in response music, made with ferrofluid.

The electromagnet at the top of the cylinder responds to sounds at frequencies at 250hz and lower — like your voice, a cello or a bass guitar — moving the fluid to the beat. You just plug it in to a DC power source and watch it dance “like a salsa dancer on a sugar rush.”

From the Kickstarter page:

Different music will cause it to respond differently…often making the fluid spike, jump between the upper and lower magnets, or shoot droplets of ferrofluid from one side to another. You’ll see when you look closely, that some music will cause different beats to be superimposed on the fluid simultaneously. The rhythm will control the fluid’s main reaction, while the melody causes fast-paced ripples to travel through the fluid.

The project is looking to raise $5,000 by late April. For the pleasure of owning the mesmerizing conversation starter, you’ll have to shell out $139, but if you’re of the tinkering variety, an $85 pledge will get you a DIY Ferrocious kit to solder yourself.