Video: This Fish Climbs Up Waterfalls By Gripping With Its Mouth 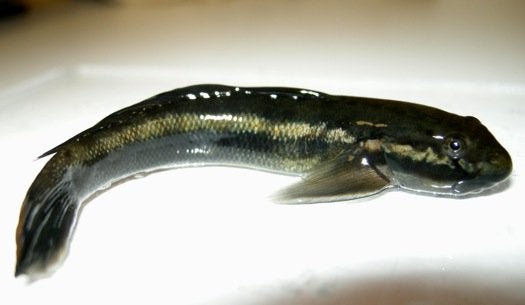 One genus of goby fish has developed a radical adaptation to life in Hawaii’s rough-and-tumble streams: it uses its mouth to climb waterfalls.

Waterfall climbing is a critical skill for Hawaiian gobioids–the fish hatch in freshwater streams, but are quickly swept to sea in the fast-flowing currents, and spend most of their adult lives working their way back upstream. Most goby species accomplish this climbing by using a suction-cup-like sucker on their bellies to attach to the waterfall’s rock substrate, then rapidly undulating their bodies to propel themselves upward before quickly reattaching again.

But goby fish belonging to the Sicyopterus genus have a more economical method of vertical movement–their mouths act as a secondary suction cup, allowing the fish to inch upward without detaching completely from the slippery, steep rock wall:

The energy-efficient technique allows the fish to scale waterfalls up to 300 feet tall.

To find out how this extraordinary adaptation might have developed, researchers from South Carolina and Minnesota compared the suction-climbing mechanics of one Sicyopterus species with the suction-eating mechanics of other goby fish. Though the two activities–eating vs. rock climbing–are quite different, the researchers found that the fish employed similar techniques for both.

That finding, says Richard Blob, one of the study’s authors, suggests the evolution of a suction-like mouth for eating algae may have paved the way for the waterfall-scaling adaptation. “They basically just took their feeding behavior and turned it on vertical,” Blob says. Of course, it could have happened the other way, too–suction-climbing could have come before suction-eating, but common sense suggests that the eating behavior came first. After all, says Blob, “Most fish need to eat, but not all fish need to climb.”