Oxford scientist to create a green, no-electricity refrigerator based on an aged Einstein patent 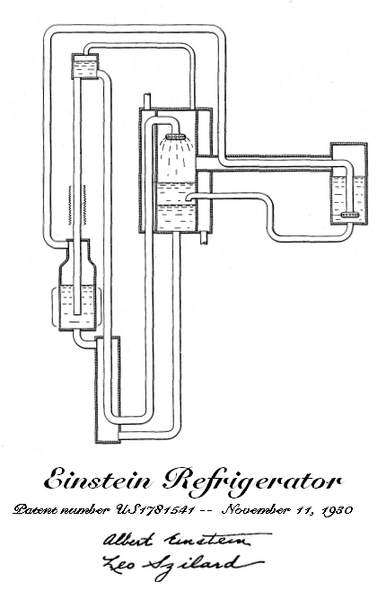 It looks like the father of modern physics had more up his sleeve than the theory of relativity. Long after he changed the landscape of modern physics, Albert Einstein and his former student Leo Szilard patented a refrigerator that had no moving parts and used only pressurized gases for cooling. It got overshadowed 20 years later, in the 1950s, when more efficient, if environmentally-damaging, freon-compressors for refrigerators became available.

But electrical engineer Malcolm McCulloch at the University of Oxford is reviving the design as part of a three-year project to create appliances that can be used in areas without electricity. McCulloch says the forgotten fridge is better fit for rural areas as it has no moving parts. It is also greener. Unlike freon-compressors that rely on greenhouse gases, Einstein and Szilard’s design uses ammonia, butane and water and takes advantage of low air pressure to reduce the boiling point of butane. In order to achieve a cooling effect, butane is heated into a gaseous state and then mixed with ammonia before being passed through a water-filled condenser. Here, the ammonia dissolves and the butane is released, before the cycle begins again.

Since the mechanism needs a heat source for the cycle to work, McCulloch is looking into solar energy to kick start the process. He and his team will also experiment with different types of gases to improve the mechanism’s efficiency. At the moment, the Oxford group has a prototype of the fridge in its early stages.