A Nylon Sheath For Your House, to Quench Fires 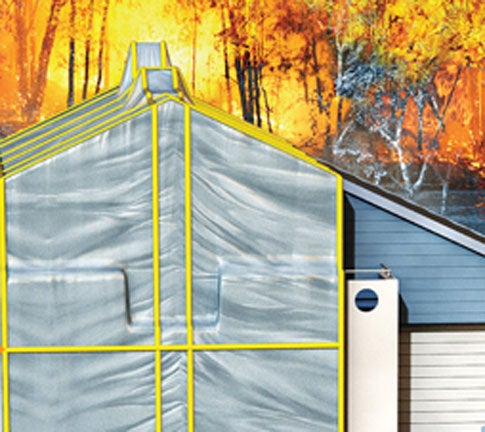 The charred remains of a multi-million-dollar mansion crumbled under Randall Griffin’s work boots. “The entire neighborhood was burned to ashes,” he says. “There was literally one home left.” Now, less than two years after Griffin surveyed the aftermath of the wildfires that destroyed more than 3,000 homes in Southern California, his group at the Department of Homeland Security’s Science and Technology Directorate is testing a deployable tent that could shield homes from the most ferocious fires.

Most houses are in danger well before flames hit their doorstep — burning embers can travel up to a mile in the wind. So DHS teamed with Foster-Miller to adapt a tent typically used to protect military vehicles from chemical attacks into a system that deflects flames from houses. A year and a few hundred yards of fireproof, rugged nylon cordura later, they produced the SAFE Quick Cover, a rooftop system that rolls out the fabric at the flip of a switch, covering an evacuated house in minutes. (You couldn’t stay in the covered house, because the fire’s heat would still kill you.) “A homeowner could deploy the system on their way out the door,” says Rob Knochenhauer, the lead engineer on the project for Foster-Miller.

Fires that raged through Australia earlier this year killed 173 people, many of whom were caught in the blaze while trying to save their house. “People put themselves in harm’s way because they want a fire truck in front of their home before they will evacuate,” Griffin says. “Quick Cover could save lives while protecting property.”