FYI: Can You Make An Authentic Twinkie At Home?

The Great Twinkie Panic of 2012 seems to be over, but we were worried. Is it possible, in case of need, to craft scientifically authentic Twinkies at home? 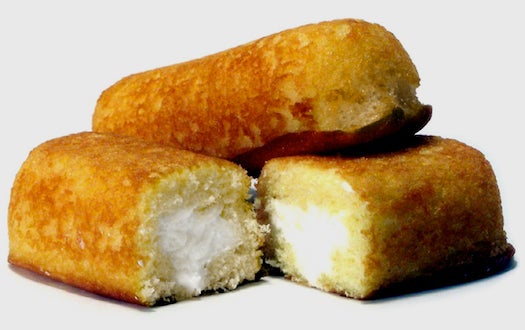 Last week, Hostess Brands, Inc. announced it was going out of business, raising fears of an orphaned Twinkie the Kid, inciting Twinkie runs on eBay, and turning up home-made recipes for the snacks. (So many recipes.) It’s since been reported that mediation will save the company, but we still need to know: Can you really make a homemade Twinkie taste the same as the version with the Hostess stamp of approval?

The abundance of recipes available online will yield a similar but not identical treat. Twinkies, notoriously, make use of an arsenal of industrial ingredients like sodium caseinate to ensure an exactly reproducible and shelf-stable texture and flavor. Chances are, you don’t have a full stockpile of sodium caseinate in your cupboard waiting for you to recreate childhood memories, but that sort of thing is more and more available.

The industrial baking process is tough to replicate at home as well, says Steve Ettlinger, author of Twinkie, Deconstructed. There’s a lot you can do at home, but a precisely-timed, industrialized mold-release system isn’t in the budget for most families. Neither is a continuous over that quick-bakes them in just a few minutes, or a line to immediately package the snacks as soon as they’re done.

For the majority of home cooks, then, those recipes that use more-common ingredients–pound cake mix, powdered sugar, a reasonably large number of eggs–are a safer bet. Nothing wrong with those. In fact, Ettlinger writes in Twinkie, Deconstructed, the original Twinkies were probably closer to the ones produced through such processes; the recipe was only changed later, to increase the shelf life.

So what is it about the way an industrial Twinkie tastes that’s so hard to copy at home? The way Twinkie filling leaves a coating on the tongue, Ettlinger says by way of example, might be a result of the polysorbate 60 used as an emulsifier. The flavor of the cake itself comes from artificial vanilla flavor (as opposed to actual vanilla extract). Dextrin is used as a crispness enhancer. The more exotic ingredients in Twinkies also help keep moisture out, something that the sponge-cakey version made with home ingredients can’t replicate as easily. “They have perfected the art of stabilization,” Ettlinger says of the commercial bakers. Only one of the ingredients on the list is a true preservative — sorbic acid — but as a result of the moisture barrier, says Ettlinger, a Twinkie stays fresh much longer than it would if it were made with traditional dairy-based ingredients, which spoil easily and need to be served relatively quickly (but arguably taste better).

Ask Us Anything
chemistry
food