5 Tips For Scientists On How To Not Write Like Scientists

A Stanford professor is trying to teach doctors and scientists how to write manuscripts that aren't dusty and jargony. 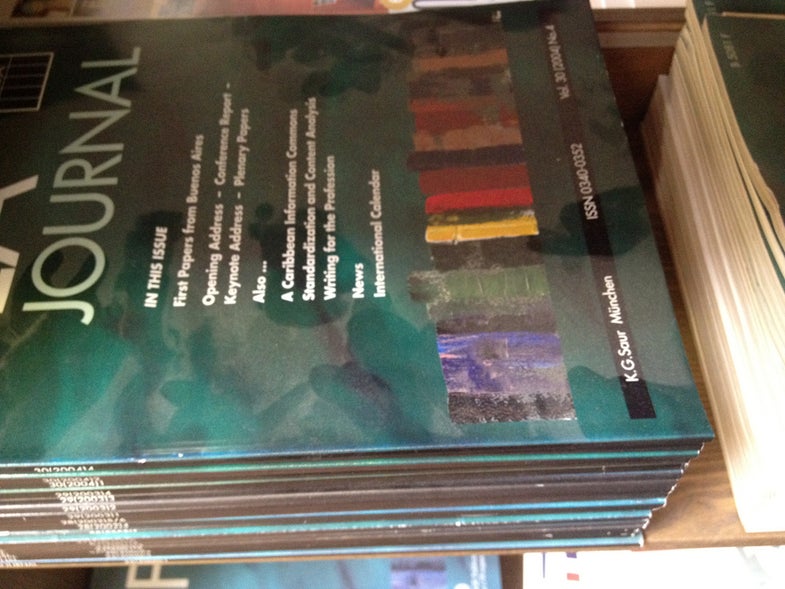 Reading through scientific papers can be a terrifying experience, and not just because of the jargon. Take, for example, this string of words: “We classified injuries as initial or subsequent injuries. An initial injury was defined as the athlete’s first injury incident during the season. Subsequent injury was defined as any injury that occurred after the initial injury, including re-injury to the same body part or a subsequent new injury to a different body part. Total injuries included all injuries recorded, initial and subsequent.”

Eyes bleeding? It should be so much simpler than that!

Stanford University epidemiologist Kristin Sainani is on a mission to improve matters, turning scientists into people who can communicate their research in actual English. “Academia has a way of writing that can be very challenging to read,” she said. “It keeps a lot of people from being able to read it. Scientific literacy in this country is a whole other topic, of course, but part if it is that it’s really hard to read science.”

In a new massive open online course called “Writing in the Sciences,” Sainani–who is also a science writer–aims to teach budding scientists some things that may seem obvious to writers and readers, but aren’t in a science grad student’s typical curriculum. “They sit down to write their first manuscript and they’re like, ‘OK, now what do I do?'” Sainani said. Here are some takeaways that can apply to anyone:

Research has shown that the use of the passive voice is ineffective.

Scientists, use active voice instead! Put your object first: “Why did the chicken cross the road?” Not “Why was the road crossed by the chicken?” Sainani said some students believe passive voice sounds more authoritative, but it doesn’t. “There’s a tradition in academia of using a lot of nouns instead of verbs, and of using the passive voice. You’re exposed to that, so you think, ‘If I don’t sound this way, I’m not going to be part of the club,'” Sainani said.

“For students, when you are joining an academic field, it’s quite intimidating. You feel like you need to throw in all the big words and the jargon to show that you’ve mastered it,” Sainani said. But shorter and clearer is usually better. If your paper is about something like somatostatin-expressing inhibitory neurons, you probably have to use that jargon, but it helps to steer clear of thesaurus words when they’re unnecessary. In one homework assignment, Sainani asks students to find substitute words for important-sounding jargon.

Example: “Give a short word that means the same thing as ‘utilize.'”

Verbs should have some kind of action inherent in them.

Action words speak louder than passive constructs. Say what happens in an experiment: The bacteria are multiplying, the particles are speeding, the stars are exploding. A homework assignment asks, “What is a single verb that means the same as ‘have a discussion’?”

Writers should nose around for verbing, and table any word that turns a noun into a verb. Sometimes this can work well, especially when the verbification happens to a proper noun (like Ronald Reagan). But generally, this is ill-advised. The opposite is also true: Verbs should not all be nounized. The next time I hear the phrase “I have a deliverable,” I’m going to scream.

Paragraphs should have a focused structure, centering on a Big Idea.

“A lot of scientists are never taught this. You learn to write the way you are exposed to in other papers,” Sainani said. “It propagates this idea that you are supposed to write in this obscure language that is hard to read.”

She said students often tell her they think their work doesn’t sound official enough if it uses active voice and employs clear language, parsimony and brevity. But scientific research says the opposite is true. Take this fantastically titled paper by Daniel Oppenheimer at Princeton. “Consequences of Erudite Vernacular Utilized Irrespective of Necessity: Problems with Using Long Words Needlessly” examined subjects’ perception of an author’s intelligence based on his or her vocabulary. As other studies have, it showed you’ll be perceived as more intelligent if you can write clearly and simply.

So far, about 35,000 people have registered for the free online course, but Sainani thinks many of them are casual observers. Some are professors considering building their own similar programs, she said. She hopes scientists realize it’s important not only to be clear and concise in their research, but also in conveying that research to others.

“There has been this idea that the science is paramount, and all the other little details, like how do you communicate, you’re expected to just pick that up as you go along,” she said. “But people are starting to realize effective communication is important.”