Megapixels: The James Webb Space Telescope Gets Chilled to 400 Degrees Below Zero

In 2018, NASA will launch the James Webb Space Telescope, which will boast mirrors approximately seven times larger than those... 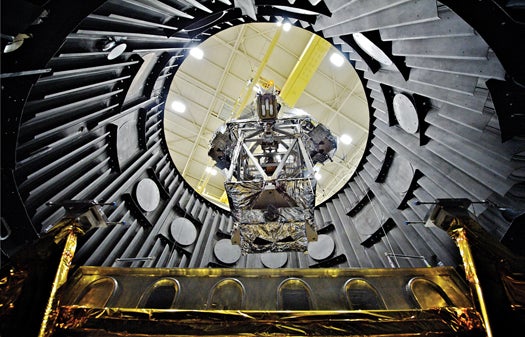 In 2018, NASA will launch the James Webb Space Telescope, which will boast mirrors approximately seven times larger than those on the Hubble. Once operational, the telescope will peer through interstellar dust and clearly image some of the youngest stars and galaxies in the universe.

After it reaches its destination, 930,000 miles from Earth, its components will chill down to –400°F. To make sure that the telescope’s scientific instrumentation can handle the cold, engineers at the Goddard Space Flight Center in Maryland put the components through rigorous environmental testing in the Space Environment Simulator. As temperatures within the chamber drop to –400°, the engineers monitor the components and scientific instrumentation to determine whether they will function properly.