Whether to eat a treat now or save it for later depends on a child's worldview--which can be manipulated. 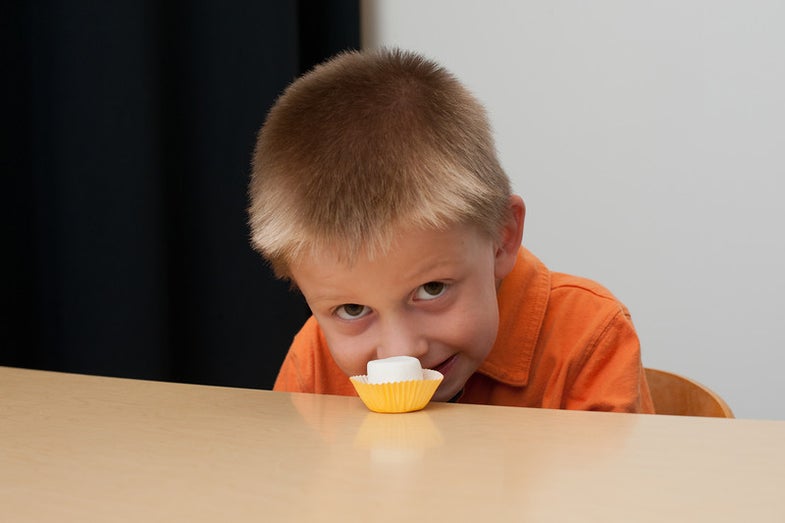 For four decades, a classic psychological experiment on kids has tested the strength of their wills: Will a toddler eat a marshmallow right now, or hold out for two? It’s been used to measure self-control, which researchers have used to make other predictions about behavior later in life. But Celeste Kidd had a hunch that it wasn’t that simple. To test it, she had to give a bunch of preschoolers a taste of disappointment.

Kidd, a doctoral candidate in brain and cognitive sciences at the University of Rochester, theorized that the kids are actually making a rational decision, not just gobbling the marshmallows without thinking about it. She thought this was related to their expectations about the world, so she set out to test that. “We decided we could manipulate their beliefs in the lab, so their decision-making could be influenced based on their expectations,” Kidd said. “If you have a kid who expects people to lie more, you could see differences.”

She and her colleagues assigned 28 three- to five-year-olds, who came in with their parents to the Rochester Baby Lab, to two different “environments,” called an unreliable and a reliable environment. Both groups were given a create-your-own-cup kit, where you decorate a blank piece of paper that gets inserted into the clear plastic lining. In the unreliable setup, the kids were given a box with broken crayons, and told if they just waited a few minutes, a grownup would return with a bigger, better box. After two and a half minutes, the researcher came back and said, “I’m sorry, but I made a mistake. We don’t have any other art supplies after all. But why don’t you use these instead?”

In the reliable experiment, the adult did come back with what she promised: A huge tray of art supplies and a handful of large, nice stickers. Then it was time for the marshmallows. Each toddler was told it was snack time, and that he or she could have one marshmallow right now–or wait, and have two instead. The adult took away the art supplies and put a single marshmallow right in front of the kids, four inches from the edge of the table. What happened next was often hilarious–kids danced, took pretend naps, sang to themselves, even nibbled on part of the marshmallows and turned them over so the evidence would be hidden. One toddler was highly skeptical, Kidd said. 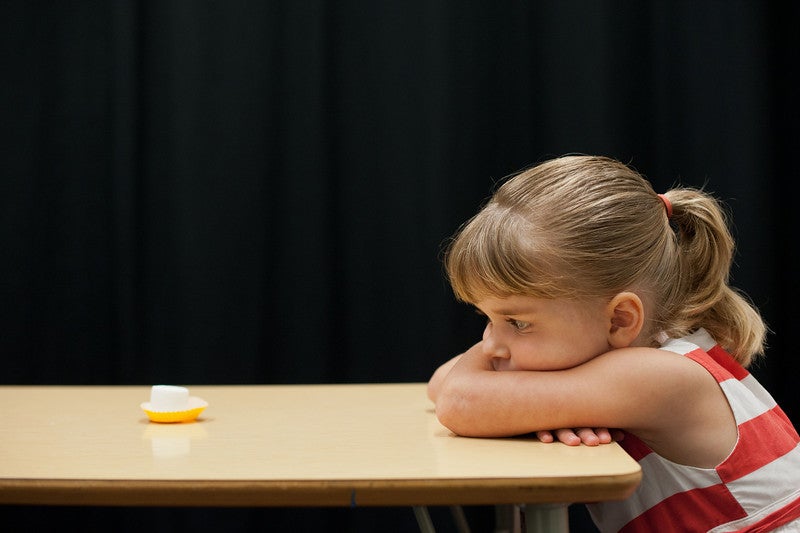 In the original 1970 test, kids who “failed” (which was 75 percent of them) ate the gelatinous sugar blocks after an average of five minutes. Follow-up tests showed that longer-waiters generally had more success later in life, which is why this test is so famous in child psychology. But this study shows there’s more to it.

“People make decisions that make sense given their experience in the world. Kids make decisions based on not what is true, but what you believe to be true in the world, because that’s all you have,” Kidd said. “If you have a kid who has lived in a very unstable environment, they may have come to make decisions on the basis of that assumption. If they are in a place where that assumption is no longer valid, teaching them that is no longer the case–giving them evidence that they are in a stable environment–may be effective.”

Regardless of what the kids did, they each got three extra marshmallows when it was all over.

The study appears in the journal Cognition, and you can read it here.