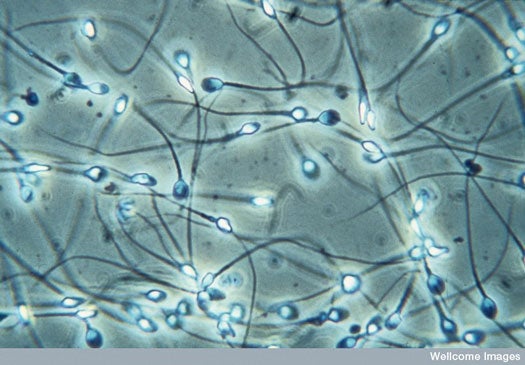 Sperm are small, but they’re quick—an individual sperm can wiggle through a space 25 times the length of its body in a single second. (For comparison, a human would have to swim 120 miles per hour to achieve the same relative speed.)

The sperm’s combination of tininess and agility makes them almost impossible to track, since researchers have to zoom way in with their microscopes to see the frenetic flagellates at all (think of following a fast-flying bird through binoculars, except moreso).

That’s where Aydogan Ozcan (one of PopSci’s own Brilliant Ten!) comes in: the UCLA engineer has developed a method to record the motion of individual sperm cells using a “lens free” imaging platform.

To track the sperm, Ozcan and his team positioned two LEDs—one red, one blue—at a 45-degree angle with each other, and pointed them at a sample gamete-filled fluid. When the multi-directional, multi-colored lights illuminated the sperm, they cast holographic shadows—shadows that can be reconstructed to obtain 3-D images—which Ozcan recorded and processed.

The technique allowed the researchers to track the motion of about 15,000 sperm cells simultaneously. The team found that, rather than moving forward in a straight line, about 5 percent of sperm swim in a small helical, or corkscrew, pattern. Perhaps more surprising was that almost all (about 90%) of the helical swimmers spun to the right.

In their paper, which came out this week in PNAS, the authors did not venture a guess as to why sperm stick to swimming in a right-handed spiral rather than a left-handed one. They did mention that the new technique will be helpful for tracking lots of other microorganisms, as well as testing the effects of various chemicals and drugs on the swimming habits of sperm. 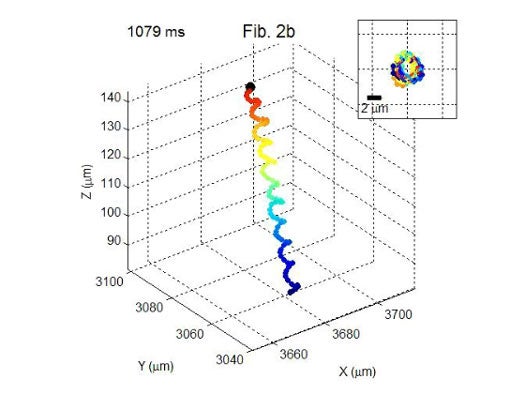 Note: The original story said that a human would have to run 540,000 mph to achieve the same relative speed as a sperm. In response to comments from readers, that number has been corrected to 102 mph