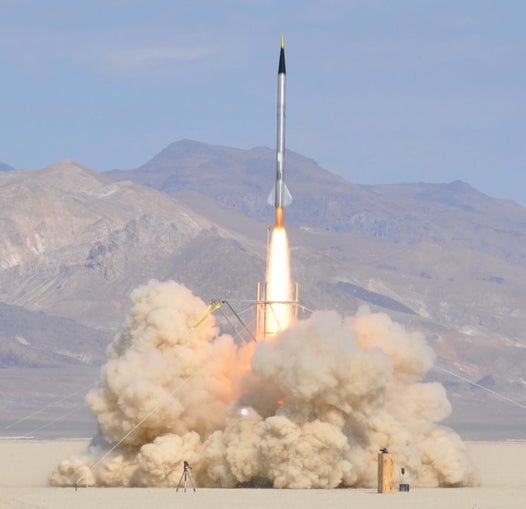 A while back, John Carmack (of “Doom” and “Quake” fame, as well as the founder of Armadillo Aerospace) issued a challenge: launch a rocket to more than 100,000 feet, get a GPS reading from up there, and recover the launch vehicle, and $5,000 is yours. Some additional benefactors pushed the Carmack prize to roughly $10,000. And as you will see in this video, Derek Deville might just claim it.

Deville’s rocket, called “Qu8k” (pronounced “quake”), launched from the Black Rock Desert in Nevada on September 30th. Ninety-two seconds later it hit its apogee, some 121,000 feet above the desert floor, before parachuting back to Earth. From there you can clearly see the darkness of space, the curvature of the Earth, and a hell of a lot of real estate below.

Alas, Deville was unable to get a GPS reading from the apogee, and thus did not fulfill all the requirements to win the Carmack prize outright. But by all accounts Qu8k did break the 100,000-feet mark, and the video clearly shows the team recovering the launch vehicle intact. As such, it seems the Carmack challenge won’t go uncompleted for much longer.

The full-length video of the launch is below (and recommended), but if your patience runs thin there’s a shortened version here.